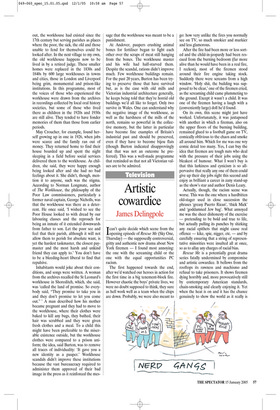 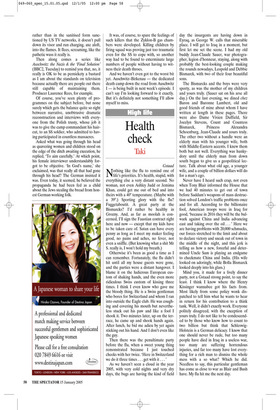 Ican’t quite decide which scene from the opening episode of Rescue Me (Sky One, Thursday) — the supposedly controversial, gritty and authentic new drama about New York firemen — I found most annoying: the one with the screaming child or the one with the equal opportunities PC racism.

The first happened towards the end, after we’d watched our heroes in action for the first time in a big tenement-block fire. However chaotic the boys’ private lives, we were no doubt supposed to think, they sure as hell work well as a team when the chips are down. Probably, we were also meant to go: how very unlike the fires you normally see on TV, so much smokier and murkier and less glamorous.

After the fire had been more or less sorted and the child-in-jeopardy had been rescued from the burning bedroom (far more alive than he would have been in a real fire, I reckon), most of the firemen stood around their fire engine taking stock. Suddenly there were screams from a high window. ‘Holy shit, the building was supposed to be clear,’ one of the firemen cried, as the screaming child came plummeting to the ground. Except it wasn’t a child. It was one of the firemen having a laugh with a (conveniently large) doll he’d found.

On its own, this scene might just have worked. Unfortunately, it was juxtaposed with another in which a fireman, also on the upper floors of the burning building, remained glued to a football game on TV, comically oblivious to the chaos and smoke all around him. Which for me was one wry comic detail too many. Yes, I can buy the idea that firemen are tough nuts who deal with the pressure of their jobs using the bleakest of humour. What I won’t buy is that this larkiness and cynicism is so allpervasive that really any one of them could give up their day jobs right this second and enjoy as brilliant a career in zany stand-up as the show’s star and author Denis Leary.

Actually, though, the racism scene was worse. This was the one where a hardbitten old-stager used in close succession the phrases ‘greasy Puerto Rican’, ‘thick Mick’ and ‘goddamned Jew bag’. What annoyed me was the sheer dishonesty of the exercise — pretending to be bold and true to life, but actually pulling its punches by shirking any racial epithets that might cause real offence — kike, spic, nigger, etc. — and by carefully ensuring that a string of representative minorities were insulted all at once, so as to allay any charges of racial bias.

Rescue Me is a potentially great drama series fatally undermined by compromise and artistic cowardice. It bellows from the rooftops its rawness and machismo and refusal to take prisoners. It shows firemen dying horribly and, more provocatively still by contemporary American standards, chain-smoking and clearly enjoying it. Yet when the heat is on and it has the chance genuinely to show the world as it really is rather than in the sanitised form sanctioned by US TV networks, it doesn’t pull down its visor and run charging, axe aloft, into the flames. It flees, screaming, like the pathetic wuss it really is.

Then along comes a series like Auschwitz: the Nazis & the ‘Final Solution’ (BBC2, Tuesday) to remind you that, no, it really is OK to be as pernickety a bastard as I am about the standards on television because actually there are people out there still capable of maintaining them. Producer Laurence Rees, for example.

Of course, you’ve seen plenty of programmes on the subject before, but none surely which gets the balance quite so right between narrative, unobtrusive dramatic reconstruction and interviews with everyone from the Polish trusty, whose job it was to give the camp commandant his haircut, to an SS soldier, who admitted to having participated in countless massacres.

Asked what was going through his head as quavering women and children stood on the edge of the ditch awaiting execution, he replied, ‘To aim carefully.’ At which point, his female interviewer understandably forgot to be objective. ‘In God’s name,’ she exclaimed, was that really all that had gone through his head? The German insisted it was. Even today, it seemed, he believed the propaganda he had been fed as a child about the Jews stealing the bread from honest German working folk. It was, of course, to spare the feelings of such killers that the Zyklon-B gas chambers were developed. Killing children by firing squad was proving just too traumatic even for the SS to cope with, so another way had to be found to exterminate large numbers of people without having to witness their death throes.

And we haven’t even got to the worst bit yet. Auschwitz–Birkenau — the dedicated death camp down the road from Auschwitz I — is being built in next week’s episode. I can’t say I’m looking forward to it exactly. But it’s definitely not something I’ll allow myself to miss.