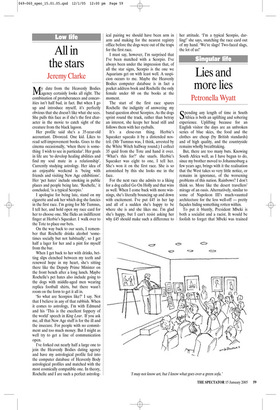 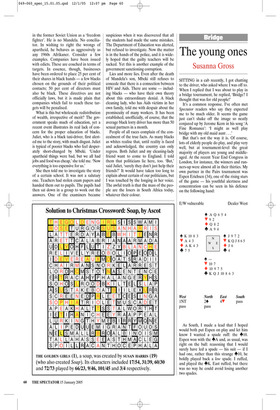 Spending any length of time in South Africa is both an uplifting and sobering experience. Uplifting because for an English visitor the days are an unbroken series of blue skies, the food and the clothes are cheap (by British standards) and of high quality, and the countryside remains wholly breathtaking.

But, there are too many buts. Knowing South Africa well, as I have begun to do, since my brother moved to Johannesburg a few years ago, brings with it the realisation that the West takes so very little notice, or remains in ignorance, of the worsening problems of this nation. Rainbows? I don’t think so. More like the desert travellers’ mirage of an oasis. Alternatively, similar to some of Napoleon III’s much-vaunted architecture for the less well-off — pretty façades hiding something rotten within.

To put it bluntly, President Mbeki is both a socialist and a racist. It would be foolish to forget that Mbeki was trained in the former Soviet Union as a ‘freedom fighter’. He is no Mandela. No conciliator. In wishing to right the wrongs of apartheid, he behaves as aggressively as any 1960s Afrikaner. Consider a few examples. Companies have been issued with edicts. These are couched in terms of targets. In essence, though, businesses have been ordered to place 25 per cent of their shares in black hands — a few blacks chosen on the grounds of their political contacts; 50 per cent of directors must also be black. These directives are not officially laws, but it is made plain that companies which fail to reach these targets will be penalised.

What is this but wholescale redistribution of wealth, irrespective of merit? The government speaks much of education, yet a recent event illustrates its real lack of concern for the proper education of blacks. Juliet, who is a black taxi-driver, first alerted me to the story, with much disgust. Juliet is typical of poorer blacks who feel desperately short-changed by Mbeki. ‘Under apartheid things were bad, but we all had jobs and food was cheap,’ she told me. ‘Now everything is too expensive for us.’ She then told me to investigate the story of a certain school. It was not a salutary one. Teachers had stolen exam papers and handed them out to pupils. The pupils had then sat down in a group to work out the answers. One of the examiners became suspicious when it was discovered that all the students had made the same mistakes. The Department of Education was alerted, but refused to investigate. Now the matter is in the hands of the police, and it is widely hoped that the guilty teachers will be sacked. Yet this is another example of the government sanctioning corruption.

Lies and more lies. Even after the death of Mandela’s son, Mbeki still refuses to concede that there is a connection between HIV and Aids. There are some — including blacks — who have their own theory about this extraordinary denial. A black cleaning lady, who has Aids victims in her own family, told me with despair about the promiscuity of many workers. It has been established, unofficially, of course, that the average black lorry driver has more than 50 sexual partners in a month.

People of all races complain of the concealment of the true facts. As many blacks as whites realise that, until reality is faced and acknowledged, the country can only regress. Both Juliet and my cleaning-lady friend want to come to England. I told them that politicians lie here, too. ‘But,’ said Juliet, ‘surely they don’t just help their friends?’ It would have taken too long to explain about certain of our politicians, but I was touched by the longing in her voice. The awful truth is that the mass of the people are the losers in South Africa today, whatever their colour.