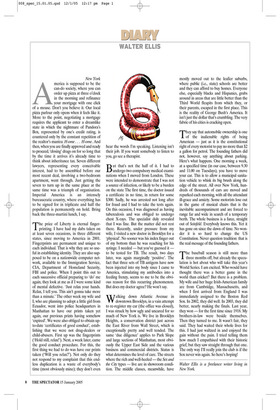 New York America is supposed to be the can-do society, where you can order up pizza at three o’clock in the morning and refinance your mortgage with one click of a mouse. Don’t you believe it. Our local pizza parlour only opens when it feels like it. More to the point, negotiating a mortgage requires the applicant to enter a dreamlike state in which the nightmare of Pandora’s Box, represented by one’s credit rating, is countered only by the constant repetition of the realtor’s mantra: H-ome ... H-ome. And then, when you are finally approved and ready to proceed, ‘closing’ drags on for so long that by the time it arrives it’s already time to think about inheritance tax. Seven different lawyers, representing every conceivable interest, had to be assembled before our most recent deal, involving a two-bedroom apartment, went through. Just getting the seven to turn up in the same place at the same time was a triumph of organisation. Imperial America is an intensely bureaucratic country, where everything has to be signed for in triplicate and half the population is permanently on hold. Bring back the three-martini lunch, I say.

The price of Liberty is eternal fingerprinting. I have had my dabs taken on at least seven occasions, in three different states, since moving to America in 2001. Fingerprints are permanent and unique to each individual. That is why they are so useful in establishing identity. They are also supposed to be on a nationwide computer network, available to the Immigration Service, CIA, Department of Homeland Security, FBI and police. When I point this out to each successive official preparing to ‘do’ me again, they look at me as if I were some kind of mental defective. ‘Just relax your hands. Relax, I tell you. This ain’t gonna take more than a minute.’ The other week my wife and I, who are planning to adopt a little girl from Ecuador, went into police headquarters in Manhattan to have our prints taken yet again, our previous prints having somehow ‘expired’. We were also obliged to obtain upto-date ‘certificates of good conduct’, establishing that we were not drug-dealers or child-abusers. First up was the fingerprints (‘Hold still, relax!’). Next, a week later, came the good conduct procedure. For this, the first thing we had to do was have our prints taken (‘Will you relax?’). Not only do they not respond to my complaint that this endless duplication is a waste of everybody’s time (most obviously mine); they don’t even hear the words I’m speaking. Listening isn’t their job. If you want somebody to listen to you, go see a therapist.

But that’s not the half of it. I had to undergo two compulsory medical examinations when I moved from London. These were intended to demonstrate that I was not a source of infection, or likely to be a burden on the state The first time, the doctor issued a certificate in no time, in return for some $300. Sadly, he was arrested not long after for fraud and I had to take the tests again. On this occasion, I was diagnosed as having tuberculosis and was obliged to undergo chest X-rays. The specialist duly revealed that I was fine. But the matter did not rest there. Recently, under pressure from my wife, I visited a new doctor in Brooklyn for a ‘physical’. No sooner was his index finger out of my bottom than he was reaching for his syringe. I needed — but you’ve guessed it to be tested for TB. The result, two days later, was again marginally ‘positive’. The fact that three sets of TB antigens have now been injected into my body since I came to America, stimulating my antibodies into a feeding frenzy, seems to me to be the obvious reason for this recurring phenomenon. But does my doctor agree? He won’t say.

Walking down Atlantic Avenue in downtown Brooklyn, in a vain attempt to re-register my car (the office was closed), I was struck by how ugly and uncared for so much of New York is. We live in Brooklyn Heights, a conservation district just across the East River from Wall Street, which is exceptionally pretty and well tended. The same ‘due diligence’ applies to Park Slope and large sections of Manhattan, most obviously the Upper East Side and the various business and commercial districts. Status is what determines the level of care. The streets where the rich and well-heeled — the Sex and the City types — live are in showroom condition. The middle classes, meanwhile, have mostly moved out to the leafier suburbs, where public (i.e., state) schools are better and they can afford to buy homes. Everyone else, especially blacks and Hispanics, grubs around in areas that are little better than the Third World fleapits from which they, or their parents, escaped in the first place. This is the reality of George Bush’s America. It isn’t just the dollar that’s crumbling. The very fabric of his cities is cracking open.

They say that automobile ownership is one of the inalienable rights of being American — just as it is the constitutional right of every motorist to pay no more than $2 a gallon for petrol. The founding fathers did not, however, say anything about parking. Here’s what happens. One morning a week, at a specified time (in our case, between 9.30 and 11.00 on Tuesdays), you have to move your car. This is to allow a municipal sanitation vehicle to whisk its big brush along the edge of the street. All over New York, hundreds of thousands of cars are moved and reparked each morning, with all the attendant ill-grace and anxiety. Some motorists lose out in the game of musical chairs that is the inevitable accompaniment and are forced to range far and wide in search of a temporary berth. The whole business is a farce, straight out of Seinfeld. Everybody knows this. Yet it has gone on since the dawn of time. No wonder it is so hard to change the US Constitution. Never question tradition: that is the real message of the founding fathers.

The baseball season is still more than three months off, but already the speculation is hot about who will take this year’s World Series. I am excited. Who would have thought there was a better game in the world than cricket? But there is a problem. My wife and her huge Irish-American family are from Cambridge, Massachusetts, and when I first arrived from England I was immediately assigned to the Boston Red Sox. In 2002, they did well. In 2003, they did better, nearly making the finals. Last year, they won — for the first time since 1918. My brothers-in-law were beside themselves. Then they turned to me. It wasn’t fair, they said. They had waited their whole lives for this. I had just waltzed in and enjoyed the gain without the pain. I tried telling them how much I empathised with their historic grief, but they saw straight through that one. The only way I’ll really join the club is if the Sox never win again. So here’s hoping!