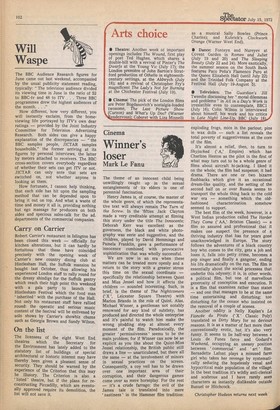 The theme of an innocent child being unwillingly caught up in the sexual entanglements of its elders is one of perennial fascination.

Henry James is, of course, the master of the whole genre, of which the representative text will always remain The Turn of the Screw. In the 'fifties Jack Clayton made a very creditable attempt at filming this story under the title The Innocents; Deborah Kerr was excellent as the governess, the black and white photography was eerie and suggestive, and the children, played by David Hemmings and Pamela Franklin, gave a performance of innocence combined with provocative sophistication that was wholly successful.

We are now in an era when these matters can be treated more openly and a return to the story with a greater stress this time on the sexual coordinate — specifically the relationship between Quint and Miss Jesse] and how it affects the children — sounded interesting. Such, in brief, is the theme of The Nightcomers (' X ', Leicester Square Theatre) with Marlon Brando in the role of Quint. Alas, Michael Winner, a gentleman not notably renowned for any kind of subtlety, has produced and directed the whole enterprise and it's painful to watch him make the wrong plodding step at almost every moment of the film. Paradoxically, the greater ' permissiveness ' seems to be the main problem; for if Winner can now be as explicit as you like about the Quint-Miss Jessel relationship, the British public still draws a line — unarticulated, but there all the same — at the involvement of minors in sexual practices on the screen. Consequently, a coy veil has to be drawn over one important area of their corruption, and their dangerous games come over as mere horseplay. For the rest — it's a crude farrago: the evil of the James tale is translated into mere 'nastiness' in the Hammer film tradition: exploding frogs, mice in the parlour, pins in wax dolls — such a list reveals the total poverty of suggestiveness at the core of the film.

It's almost a relief, then, to turn to Skyjacked (' A,' Empire) which has Charlton Heston as the pilot in the first of what may turn out to be a whole genre of films about aircraft hi-jacking. I liked it on the whole; the film had suspense; it had drama. There are one or two bizarre flashbacks which give it an occasional dream-like quality, and the setting of the second half on or over Russia seems to transport the whole thing back to the cold war era — something which the old fashioned characterisation somehow seemed to support.

The best film of the week, however, is a West Indian production called The Harder They Come (' AA,' Brixton Classic) — a film so assured and professional that it makes one suspect the presence of a thriving industry that has for years gone unacknowledged in Europe. The story follows the adventures of a black country boy who comes to the city, gets a job and loses it, falls into petty crime, becomes a pop singer and finally a gangster, ending his life dramatically on the run. The film is essentially about the social processes that underlie this odyssey; it is, in other words, a political film, but one of marvellous generosity of conception and execution. It is a film that examines rather than states — and one that manages to be at the same time entertaining and disturbing: too disturbing for the censor who insisted on the removal of a couple of scenes.

Another oddity is Nelly Kaplan's La Fiancée du Pirate (' X ' Classic Poly) translated as Dirty Mary for no devious reasons. It is as a matter of fact more than conventionally erotic, but it's also very funny. It seems to lie half-way between a Louis de Funes farce and Godard's Weekend, occupying an uneasy position between ' commercial ' and ' art ' film. Bernadette Lafont plays a misused farm girl who takes her revenge by systematically seducing the hopelessly venal and hypocritical male population of the village. In the best tradition it's wildly anti-clerical and scabrous and I have rarely seen characters as instantly dislikeable outside Bunuel or Hitchcock.