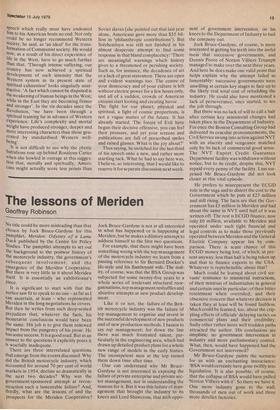 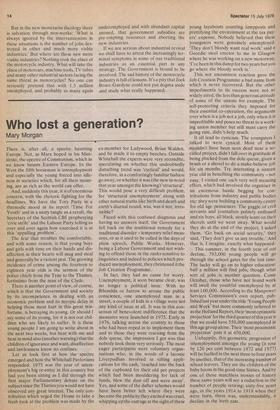 The lessons of Meriden

No title could be more misleading than that Chosen by Jock Bruce-Gardyne for this Pamphlet, Meriden: Odyssey of a Lame buck published by the Centre for Policy Studies. The pamphlet attempts to set out the background to the postwar history of the motorcycle industry, the government's subsequent involvement, and the emergence of the Meriden Cooperative. But there is very little in it about .Meriden itself. It is essentially an exhibitionist's Piece.

It is significant to start with that the author saw fit to speak to no one – as far as I can ascertain, at least – who represented Meriden in the long negotiations he covers. But then he writes from such deep-seated Prejudices that, whatever the facts, his Monetarist conclusions would have been the same. His job is to give them renewed Impact from the pungency of his prose. He has some success. It is a good read. But as an answer to the questions it explicitly poses it is woefully inadequate.

There are three interrelated questions that emerge from the events discussed. Why did the British motorcycle industry, which accounted for around 70 per cent of world markets in 1954, decline so dramatically in the next two decades? Why was the government-sponsored attempt at reconstruction such a lamentable failure? And, thirdly, what are the lessons of and the prospects for the Meriden Cooperative? Jock Bruce-Gardyne is not at all interested in what has happened or is happening at Meriden; but he makes a dilatory attempt to address himself to the first two questions.

For example, that there might have been something wrong with the top management of the motorcycle industry we learn from a passing reference to Sir Bernard Docker's life-style and his flamboyant wife. The reality, of course, was that the BSA Group was subjected for some twenty-five years to a whole series of irrelevant structural reorganisations, top management reshuffles and abortive attempts at new product development.

Like it or not, the failure of the British motorcycle industry was the failure of top management to organise and invest in the successful development of new products and of new production methods. I hasten to say top management; for down the line there was much frustrated talent, particularly in the engineering area, which had drawn up detailed product plans for a whole new range of models in the early Sixties. The incompetent men at the top turned them down time after time.

One can understand why Mr BruceGardyne is not interested in exposing the failure of private enterprise and private sector management, nor in understanding the reasons for it. But it was this failure of management that brought the industry to its knees and Lord Shawcross, that arch oppo

nent of government intervention, on his knees to the Department of Industry to bail the company out.

Jock Bruce-Gardyne, of course, is more interested in getting his teeth into the awful mess that successive governments, and Dennis Poore of Norton Villiers Triumph managed to make over the next three years. And here he does make one valid point that helps explain why the attempt failed so lamentably: successive governments were unwilling at certain key stages to face up to the likely real total cost of rebuilding the industry. He could also have mentioned a lack of perseverance, once started, to see the job through.

But there was no lack of will to call a halt after certain key ministerial changes had taken place in the Department of Industry. For once the Boston Consulting Group had delivered its oracular pronouncements, the Civil Service swung into action against NVT with an alacrity and vengeance matched only by its lack of commercial good sense. The NVT Export Credit Guarantee Department facility was withdrawn without notice, but to its credit, despite this, NVT repaid every penny of the facility. I am surprised Mr Bruce-Gardyne did not look closer at this vital episode.

He prefers to misrepresent the ECGD role in the saga and to distort the cost to the Government which he puts at £25 million and still rising. The facts are that the Government has £5 million in Meriden and had about the same in NVT until half of it was written off. The rest is ECGD finance, now only £6 million, available to Meriden and operated under such tight financial and legal controls as to make those previously operated between Meriden and the General Electric Company appear lax by comparison. There is scant chance of this ECGD money being lost, of which, at present anyway, less than half is being taken up and that to finance exports to the USA. Whatever is reprehensible about that?

Much could be learned about civil servants' resistance to ministerial instructions, of their mistrust of industrialists in general and certain ones in particular; of their bitter resentment when overruled; and their obsessive concern that whatever decision is taken they at least will be found faultless. Much could be learned, too, about the crippling effects of officials' delaying tactics on commercial plans and their credibility. Sadly other rather more well trodden paths attracted the author. His conclusions are simplistic: no government intervention in industry and more parliamentary control. What, then, would have happened had the Government not intervened?

Mr Bruce-Gardyne paints the scenario for us with an enchanting insouciance: 'BSA would certainly have gone swiftly into liquidation. It is also possible, of course, that the collapse of BSA would have pulled Norton Villiers with it'. So there we have it. One more industry gone to the wall, thousands of men out of work and three more derelict factories. But in the new monetarist theology there is salvation through non-works: 'What is always ignored by the interventionists in these situations is the number of jobs destroyed in other and much more viable industries.' But where are these new more viable industries? Nothing took the place of the motorcycle industry. What will take the place of motorcars, machine tools, TV tubes and many other industrial sectors facing the same threat as motorcycles? No one can seriously pretend that with 1.5 million unemployed, and probably as many again underemployed and with abundant capital unused, that government subsidies are pre-empting resources and aborting the new industries.

If we are serious about industrial revival we shall have to arrest the increasingly terminal symptoms in some of our traditional industries as an essential part in any strategy. The Government is bound to be involved. The sad history of the motorcycle industry is full of lessons. It's a pity that Jock Bruce-Gardyne could not put dogma aside and study what really happened.