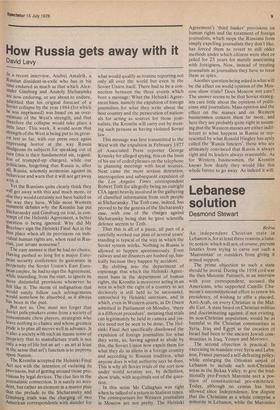 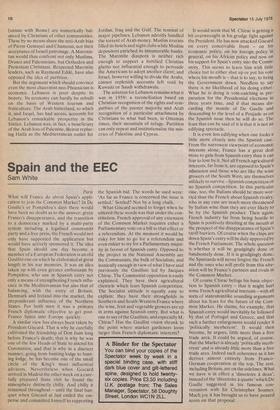 Beirut An independent Christian state in Lebanon is, for at least three reasons,a lunatic notion: which will not, of course, prevent fanatics from trying to carve out such a `Maronistan' or outsiders from giving it armed support.

The prime objection to such a state should be moral. During the 1958 civil war the then Maronite Patriarch, in an interview with your correspondent, accused the Americans, who supported Camille Chamoun's unconstitutional effort to renew his presidency, of wishing to affix a placard, Anti-Arab, on every Christian in the Middle East. A state based on Christian militias and discriminating against, if not evicting, its non-Christian population, would be as harmful to the Christian communities in Syria, Iraq and Egypt as the creation of Israel had been to the ancient Jewish corntnunities in Iraq, Yemen and Morocco.

The second objection is practical. In exercising its mandate over Syria and Lebanon, France pursued a self-defeating policy: while enlarging the Ottoman sanjak of Lebanon to include such non-Christian areas as the Bekaa Valley, to give the traditionally pro-French Maronite sect a position of constitutional pre-eminence. Today, although no census has been allowed since Independence, few dispute that the Christians as a whole comprise a minority in Lebanon, while the Maronites (uniate with Rome) are numerically balanced by Christians of other communities. These by no means share the anti-Arab bias of Pierre Gemayel and Chamoun, nor their acceptance of Israeli patronage. A Maronistan would thus confront not only Muslims, Druses and Palestinians, but Orthodox and Protestant Christians. Respected Maronite leaders, such as Raymond Edde, have also opposed the idea of partition.

But the argument which should convince even the most chauvinist neo-Phoenician is economic. Lebanon is poor despite its beauty. Its economy can hardly be rebuilt on the basis of Western tourism and fruticulture. The Arab hinterland, to which it, and Israel, has had access, accounts for Lebanon's remarkable prosperity in the Sixties. Lebanon was, in fact, a beneficiary of the Arab loss of Palestine, Beirut replacing Haifa as the Mediterranean outlet for Jordan, Iraq and the Gulf. The teminal of major pipelines, Lebanon adroitly handled the torrent of Arab money. Muslim tourists filled its hotels and night clubs while Muslim depositors enriched its innumerable banks. The Maronite diaspora is neither rich enough to support a fortified Christian ghetto nor influential enough to persuade the Americans to adopt another client; and Israel, however willing to divide the Arabs, cannot replenish accounts left void by Kuwaiti or Saudi withdrawals.

The solution for Lebanon remains what it was in 1958: a reconciliation based on Christian recognition of the rights and sympathies of the poorer majority and Arab recognition of a particular attachment by Christians to what had been, in Ottoman times, their mountain of refuge. Partition can only repeat and institutionalise the miseries of Palestine and Cyprus.