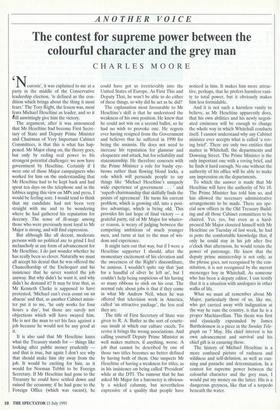 Neurosis', it was explained to me at a party in the middle of the Conservative leadership election, 'is defined as the con- dition which brings about the thing it most fears.' The Tory Right, the lesson was, most fears Michael Heseltine as leader, and so it *ill unwittingly give him the victory.

The argument, after it was announced that Mr Heseltine had become First Secre- tary of State and Deputy Prime Minister and Chairman of Very Important Cabinet Committees, is that this is what has hap- pened. Mr Major clung on, the theory goes, but only by ceding real power to his strongest potential challenger: we now have government by Heseltine. Certainly if I were one of those Major campaigners who worked for him on the understanding that Mr Heseltine had to be kept back and had spent ten days on the telephone and in the lobbies urging this view on MPs and press, I would be feeling sore. I would tend to think that my candidate had not been very straight with me and to be wondering where he had gathered his reputation for decency. The sense of ill-usage among those who were previously most loyal to Mr Major is strong, and will find expression.

But although like all decent, moderate persons with no political axe to grind I feel melancholy at any form of advancement for Mr Heseltine, I do just wonder whether he has really been so clever. Naturally we must all accept his denial that he was offered the Chancellorship of the Exchequer and his insistence that he never wanted the job anyway. But why didn't he want it, and why didn't he demand it? It may be true that, as Mr Kenneth Clarke is supposed to have protested, 'Michael can't even count on an abacus' and that, as another Cabinet minis- ter put it to me, 'he only works for four hours a day', but those are surely not objections which will have swayed him. He is not the man to set his face against a job because he would not be any good at it.

It is also said that Mr Heseltine hates what the Treasury stands for — things like looking after public money prudently — and that is true, but again I don't see why that should make him shy away from the job. It would be exciting for him, as it would for Norman Tebbit to be Foreign Secretary. If Mr Heseltine had gone to the Treasury he could have settled down and ruined the economy; if he had gone to the Foreign Office (which was ,vacant), he could have got us irretrievably into the United States of Europe. As First This and Deputy That, he won't be able to do either of these things, so why did he act as he did?

The explanation most favourable to Mr Heseltine's skill is that he understood the weakness of his own position. He knew that he could not win on a second ballot, so he had no wish to provoke one. He regrets ever having resigned from the Government and believes that he suffered in 1990 for being the assassin. He does not need to increase his reputation for glamour and eloquence and attack, but for reliability and statesmanship. He therefore concocts with the Prime Minister a role for bushy eye- brows rather than flowing blond locks, a role which will persuade people to say things like `Michael Heseltine's uniquely wide experience of government . . . ' and `superb chairmanship that skilfully finds the points of agreement'. He turns his current problem, which is growing old, into a posi- tive advantage, which is being old. This provides his last hope of final victory — a grateful party, rid of Mr Major for whatev- er reason, is weary of judging between the competing ambitions of much younger men, and turns at last to the man of wis- dom and experience.

It might turn out that way, but if I were a Heseltine supporter I should, after the momentary excitement of his elevation and the sweetness of the Right's discomfiture, be anxious. I wouldn't quite say that `just for a handful of silver he left us', but I couldn't help being suspicious of his having so many ribbons to stick on his coat. The normal rule about jobs is that if they come in what Mr Andrew Neil, when he was offered that television work in America, called 'an attractive package', the less real they are.

The title of First Secretary of State was given to R. A. Butler as the sort of courte- ous insult at which our culture excels. To revive it brings the wrong associations. And calling yourself Deputy Prime Minister as well makes matters, if anything, worse. A job that cannot be described by one of those two titles becomes no better defined by having both of them. One suspects Mr Heseltine of having a weakness for titles, as in his insistence on being called 'President' while at the DTI. The rumour that he has asked Mr Major for a baronetcy is obvious- ly a wicked calumny, but nevertheless expressive of a quality that people have noticed in him. It makes him more attrac- tive, perhaps, that he prefers harmless vani- ty to total power, but it obviously makes him less formidable.

And it is not such a harmless vanity to believe, as Mr Heseltine apparently does, that his own abilities and his newly negoti- ated eminence will be enough to change the whole way in which Whitehall conducts itself. I cannot understand why any Cabinet minister ever accepts what is called 'a rov- ing brief. There are only two entities that matter in Whitehall, the departments and Downing Street. The Prime Minister is the only important one with a roving brief, and he finds it hard enough. No one without the authority of his office will be able to make any impression on the departments.

To which the answer is made that Mr Heseltine will have the authority of No 10. The Prime Minister has told him so, and has allowed the necessary administrative arrangements to be made. There are spe- cial new offices in the Old Treasury Build- ing and all those Cabinet committees to be chaired. Yes, yes, but even as a hard- pressed Mr Major closeted himself with Mr Heseltine on Tuesday of last week, he had in petto the comfortable knowledge that, if only he could stay in his job after five o'clock that afternoon, he would retain thc power of patronage. He knew that the deputy prime ministership is not only, as the phrase goes, not recognised by the con- stitution, it is not recognised by the merest messenger boy in Whitehall. As someone who has been a deputy editor, I can testify that it is a situation with analogues in other walks of life.

What we must all remember about Mr Major, particularly those of us, like me, who get carried away with indignation at the way he runs the country, is that he is a proper Machiavellian. This thesis was first and classically expounded by James Bartholomew in a piece in the Sunday Tele- graph on 7 May. His chief interest is his own advancement and survival and his chief gift is in ensuring these.

The history of Michael Heseltine is a more confused picture of rashness and wildness and self-delusion, as well as cun- ning and panache and determination. In a contest for supreme power between the colourful character and the grey man, I would put my money on the latter. His is a dangerous greyness, like that of a torpedo beneath the water.