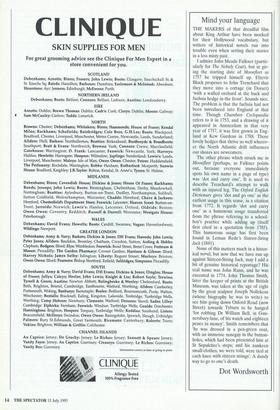 THE MAKERS of that dreadful film about King Arthur have been mocked for their Hollywood vocabulary, but writers of historical novels run into trouble even when setting their stories in a less misty past.

I admire John Meade Falkner (partic- ularly for The Nebuly Coat), but in giv- ing the starting date of Moonfleet as 1757 he tripped himself up. Elzevir Block proposes to John Trenchard that they move into a cottage (in Dorset) 'with a walled orchard at the back and fuchsia hedge in the front'. Sounds nice. The problem is that the fuchsia had not been introduced into England at that time. Though Chambers Cyclopaedia refers to it in 1753, and a drawing of it appeared in Amsterdam in that very year of 1757, it was first grown in Eng- land at Kew Gardens in 1788. Thosc lovely hedges that thrive so well wherev- er the North Atlantic drift influences our shores are newcomers.

The other phrase which struck me in Moonfleet (perhaps, as Falkner points out, because everyone immediately spots his own name in a page of type) was 'dot and carry one'. It is used to describe Trenchard's attempt to walk with an injured leg. The Oxford English Dictionary gives 'dot and go one' as the earliest usage in this sense, in a citation from 1772. It regards 'dot and carry one' as a humorous usage transferred from the phrase referring to a school- boy's practice while adding up (itself first cited in a quotation from 1785). This humorous usage has first been found in Leman Rede's Sixteen-String Jack (1841).

None of this matters much in a histor- ical novel, but now that we have run up against Sixteen-String Jack, may I add a bit of genuine historical reportage? His real name was John Rann, and he was executed in 1774. John Thomas Smith, later the keeper of prints at the British Museum, was taken at the age of eight by the great sculptor Joseph Nollekens (whose biography he was to write) to see him going down Oxford Road (now Street) towards Tyburn to be hanged 'for robbing Dr William Bell, in Gun- nersbury-lane, of his watch and eighteen pence in money'. Smith remembers that 'he was dressed in a pea-green coat, with an immense nosegay in the button- holes, which had been presented him at St Sepulchre's steps; and his nankeen small-clothes, we were told, were tied at each knee with sixteen strings'. A dandy way to go to one's death.