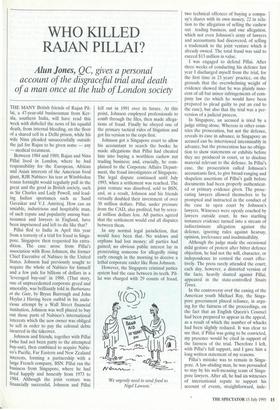 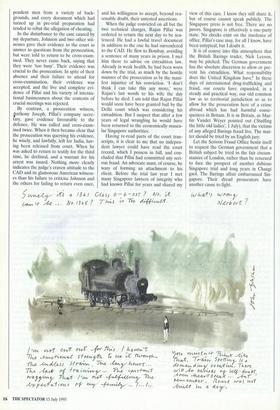 Alun Jones, QC, gives a personal account of the disgraceful trial and death of a man once at the hub of London society

THE MANY British friends of Rajan Pil- lai, a 47-year-old businessman from Ker- ala, southern India, will have read this week with disbelief the news of his squalid death, from internal bleeding, on the floor of a shared cell in a Delhi prison, while his wife Nina pleaded unsuccessfully outside the jail for Rajan to be given some — any — medical treatment.

Between 1984 and 1989, Rajan and Nina Pillai lived in London, where he had responsibility for the European, African and Asian interests of the American food giant, RJR Nabisco: his tent at Wimbledon tennis fortnight would regularly pull in the great and the good in British society, such as Sir Charles and Lady Powell, and lead- ing Indian sportsmen such as Sunil Gavaskar and V.J. Amritraj. How can an amiable, industrious and hospitable man, of such repute and popularity among busi- nessmen and lawyers in England, have been imprisoned and left to die like that?

Pillai fled to India in April this year from a travesty of a trial for fraud in Singa- pore. Singapore then requested his extra- dition. The case arose from Pillai's association with Ross Johnson, the former Chief Executive of Nabisco in the United States. Johnson had previously sought to acquire the whole of Nabisco for himself and a few pals for billions of dollars in a 'leveraged buy-out' in 1988. (That story, one of unprecedented corporate greed and amorality, was brilliantly told in Barbarians at the Gate, by Bryan Burrough and John Heylar.) Having been outbid in his auda- cious attempt by a Wall Street financial institution, Johnson was well placed to buy out those parts of Nabisco's international interests which the new owner was obliged to sell in order to pay the colossal debts incurred in the takeover.

Johnson and friends, together with Pillai (who had not been party to the attempted buy-out), then combined to acquire Nabis- co's Pacific, Far Eastern and New Zealand interests, forming a partnership with a large French company, BSN. Pillai ran the business from Singapore, where he had lived happily and honestly from 1973 to 1984. Although the joint venture was financially successful, Johnson and Pillai fell out in 1991 over its future. At this point, Johnson employed professionals to comb through the files, then made allega- tions of fraud. Finally he obeyed one of the primary tactical rules of litigation and got his version to the cops first.

Johnson got a Singapore court to allow his accountant to search the books; he made allegations that Pillai had cheated him into buying a worthless cashew nut trading business; and, crucially, he com- plained to the Corporate Affairs Depart- ment, the fraud investigators of Singapore. The legal dispute continued until July 1993, when a settlement was reached. The joint venture was dissolved, sold to BSN, and, as a result, Johnson and his friends virtually doubled their investment of over 30 million dollars. Pillai, under pressure from the CAD, also profited, but by sever- al million dollars less. All parties agreed that the settlement would end all disputes between them.

In any normal legal jurisdiction, that would have been that. No widows and orphans had lost money; all parties had gained; no obvious public interest lay in prosecuting someone for allegedly rising early enough in the morning to deceive a lethal corporate raider like Ross Johnson.

However, the Singapore criminal justice system had the case between its teeth. Pil- lai was charged with 29 counts of fraud, 'We urgently need to send food to Nigel Lawson.' two technical offences of buying a compa- ny's shares with its own money, 22 in rela- tion to the allegation of selling the cashew nut trading business, and one allegation, which not even Johnson's army of lawyers and accountants had discovered, of selling a trademark to the joint venture which it already owned. The total fraud was said to exceed $13 million in value.

I was engaged to defend Pillai. After three weeks of conducting his defence last year I discharged myself from the trial, for the first time in 23 years' practice, on the grounds that the overwhelming weight of evidence showed that he was plainly inno- cent of all but minor infringements of com- pany law (to which he would have been prepared to plead guilty to put an end to the case); but also that the trial was a per- version of a judicial process.

In Singapore, an accused is tried by a judge sitting alone. Whereas in other coun- tries the prosecution, but not the defence, reveals its case in advance, in Singapore an accused can be interviewed interminably in advance, but the prosecution has no obliga- tion to show statements or exhibits before they are produced in court, or to disclose material relevant to the defence. In Pillai's case, the prosecution called Johnson's accountants first, to give broad-ranging and shapeless assertions of Pillai's guilt before documents had been properly authenticat- ed or primary evidence given. The prose- cuting lawyers allowed themselves to be prompted and instructed in the conduct of the case in open court by Johnson's lawyers. Witnesses were openly coached by lawyers outside court. In two startling instances evidence turned into a stream of indiscriminate allegation against the defence, ignoring rules against hearsay, opinion, irrelevance and inadmissibility.

Although the judge made the occasional mild gesture of protest after bitter defence objection, he had not the will, character, or independence to control the court effec- tively. The press rarely attended the court; each day, however, a distorted version of the facts, heavily slanted against Pillai, appeared in the state-controlled Straits Times.

In the controversy ovef the caning of the American youth Michael Ray, the Singa- pore government placed reliance, in argu- ing for the fairness of the proceedings, on the fact that an English Queen's Counsel had been prepared to appear in the appeal, as a result of which the number of whacks had been slightly reduced. It was clear to me that, if Pillai was going to be convicted, my presence would be cited in support of the fairness of the trial. Therefore I left, with Pillai's full support, and I gave him a long written statement of my reasons.

Pillai's mistake was to remain in Singa- pore. A law-abiding man, he was persuaded to stay by his well-meaning team of Singa- pore lawyers. After all, he had six witnesses of international repute to support his account of events, straightforward, inde- pendent men from a variety of back- grounds, and every document which had turned up in pre-trial preparation had tended to rebut the allegation of cheating.

In the disturbance to the case caused by my departure, Johnson and two other wit- nesses gave their evidence to the court in answer to questions from the prosecution, but were told to return to be cross-exam- ined. They never came back, saying that they were 'too busy'. Their evidence was crucial to the prosecution. In spite of their absence and their failure to attend for cross-examination, their evidence was accepted, and the live and complete evi- dence of Pillai and his variety of interna- tional businessmen about the contents of crucial meetings was rejected.

By contrast, a prosecution witness, 4.nthony Joseph, Pillai's company secre- tary, gave evidence favourable to the defence. He was called and cross-exam- ined twice. When it then became clear that the prosecution was querying his evidence, he wisely, and lawfully, left for India, hav- ing been released from court. When he was asked to return to testify for the third time, he declined, and a warrant for his arrest was issued. Nothing more clearly indicates the judge's craven attitude to the CAD and its glamorous American witness- es than his failure to criticise Johnson and the others for failing to return even once, and his willingness to accept, beyond rea- sonable doubt, their untested assertions.

When the judge convicted on all but the two technical charges, Rajan Pillai was ordered to return the next day to be sen- tenced. He had a lawful travel document in addition to the one he had surrendered to the CAD. He flew to Bombay, avoiding a sentence of many years in prison. I met him there to advise on extradition law. Already in weak health, he had been worn down by the trial, as much by the hostile manner of the prosecution as by the mani- fest injustice of his conviction. 'I don't think I can take this any more,' were Rajan's last words to his wife the day before he died. I am told that Rajan Pillai would soon have been granted bail by the Delhi court which was considering his extradition. But I suspect that after a few years of legal wrangling he would have been returned to the economically muscu- lar Singapore authorities.

Having re-read parts of the court tran- scripts, it is clear to me that no indepen- dent lawyer could have read the court record, which I possess in full, and con- cluded that Pillai had committed any seri- ous fraud. An advocate must, of course, be wary of forming an attachment to his client. Before the trial last year I met many Singapore lawyers of integrity who had known Pillai for years and shared my view of this case. I know they still share it, but of course cannot speak publicly. The Singapore press is no't free. There are no jurors. Singapore is effectively a one-party state. No checks exist on the insolence of office. Pillai's case may, for all I know, have been untypical, but I doubt it.

It is of course into this atmosphere that the British Barings trader, Nick Leeson, may be pitched. The German government has the absolute discretion to allow or pre- vent his extradition. What responsibility does the United Kingdom have? In these days of international drug-trafficking and fraud, our courts have expanded, in a steady and practical way, our old common law as to territorial jurisdiction so as to allow for the prosecution here of a crime abroad which has had harmful conse- quences in Britain. It is in Britain, as Mar- tin Vander Weyer pointed out ('Stuffing the little old ladies', 1 July), that the victims of any alleged Barings fraud live. The mat- ter should be tried by an English jury.

Let the Serious Fraud Office bestir itself to request the German government that a British subject be tried in the fair circum- stances of London, rather than be returned to face the prospect of another dubious Singapore trial and long years in Changi gaol. The Barings affair embarrassed Sin- gapore. Their dread prosecutors have another cause to fight.