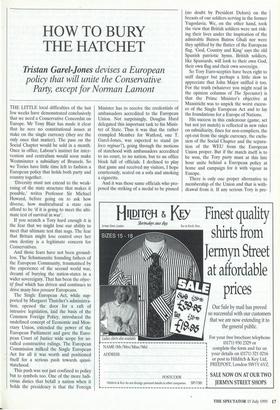 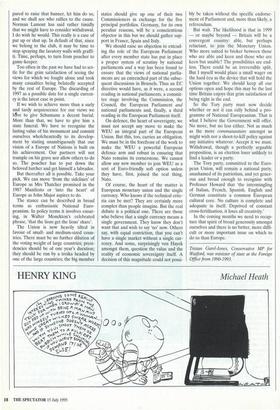 HOW TO BURY THE HATCHET

policy that will unite the Conservative Party, except for Norman Lamont

THE LITTLE local difficulties of the last few weeks have demonstrated conclusively that we need a Conservative Concordat on Europe. Mr Tony Blair has made it clear that he sees no constitutional issues at stake on the single currency (they are the only ones that matter). The pass on the Social Chapter would be sold in a month. Once in office, Labour's instinct for inter- vention and centralism would soon make Westminster a subsidiary of Brussels. So we Tories have little time left to fashion a European policy that holds both party and country together.

'Diversity must not extend to the weak- ening of the state structure that makes it possible,' writes Professor Sir Michael Howard, before going on to ask how diverse, how multicultural a state can afford to be 'if it is going to meet the ulti- mate test of survival in war'.

If you scratch a Tory hard enough it is the fear that we might lose our ability to meet that ultimate test that nags. The fear that Britain might lose control over her own destiny is a legitimate concern for Conservatives.

And those fears have not been ground- less. The Schumannite founding fathers of the European Community, traumatised by the experience of the second world war, dreamt of burying the nation-states in a wider sovereignty. That has been the objec- tif final which has driven and continues to drive many bien pensant Europeans.

The Single European Act, while sup- ported by Margaret 'Thatcher's administra- tion, opened the door for a raft of intrusive legislation, laid the basis of the Common Foreign Policy, introduced the undefined concept of Economic and Mon- etary Union, extended the power of the European Parliament and gave the Euro- pean Court of Justice wide scope for so- called constructive rulings. The European Commission milked the Single European Act for all it was worth and positioned itself for a serious push towards quasi- statehood.

This push was not just confined to policy but to symbols too. One of the more ludi- crous duties that befall a nation when it holds the presidency is that the Foreign Minister has to receive the credentials of ambassadors accredited to the European Union. Not surprisingly, Douglas Hurd delegated this important task to his Minis- ter of State. Thus it was that the rather crumpled Member for Watford, one T. Garel-Jones, was expected to stand (in loco reginae?), going through the motions of statehood with ambassadors accredited to no court, to no nation, but to an office block full of officials. I declined to play that game and received my visitors, I hope courteously, seated on a sofa and smoking a cigarette.

And it was those same officials who pro- posed the striking of a medal to be pinned (no doubt by President Delors) on the breasts of our soldiers serving in the former Yugoslavia. We, on the other hand, took the view that British soldiers were not risk- ing their lives under the inspiration of the admirable Butros Butros Ghali nor were they uplifted by the flutter of the European flag. 'God, Country and King' says the old Spanish patriotic hymn. British soldiers, like Spaniards, will look to their own God, their own flag and their own sovereign.

So Tory Euro-sceptics have been right to sniff danger but perhaps a little slow to appreciate that John Major sniffed it too. For the truth (whatever you might read in the opinion columns of The Spectator) is that the Prime Minister's objective at Maastricht was to unpick the worst excess- es of the Single European Act and to lay the foundations for a Europe of Nations.

His success in this endeavour (game, set but not yet match) is reflected in new rules on subsidiarity, fines for non-compliers, the opt-out from the single currency, the exclu- sion of the Social Chapter and the separa- tion of the WEU from the European Union proper. But if the match itself is to be won, the Tory party must at this late hour unite behind a European policy at home and campaign for it with vigour in Europe.

There is only one proper alternative to membership of the Union and that is with- drawal from it. If any serious Tory is pre- pared to raise that banner, let him do so, and we shall see who rallies to the cause. Norman Lamont has said rather timidly that we might have to consider withdrawal. I do wish he would. This really is a case of put up or shut up. In default of that, since we belong to the club, it may be time to stop spraying the lavatory walls with graffi- ti. Time, perhaps, to turn from poacher to game-keeper.

Too often in the past we have had to set- tle for the grim satisfaction of seeing the views for which we fought alone and took many casualties being belatedly accepted by the rest of Europe. The discarding of 1997 as a possible date for a single curren- cy is the latest case in point.

If we wish to achieve more than a surly and tardy acquiescence for our views we have to give Schumann a decent burial. More than that, we have to give him a state funeral. We have to recognise the lasting value of his monument and commit ourselves wholeheartedly to its develop- ment by stating unambiguously that our vision of a Europe of Nations is built on his achievement. Our partners will not trample on his grave nor allow others to do so. The poacher has to put down the beloved lurcher and get himself a labrador.

But thereafter all is possible. Take your pick. We can move 'from the sidelines' of Europe as Mrs Thatcher promised in the 1987 Manifesto or 'into the heart' of Europe as John Major aspires to do.

The Union is now heavily tilted in favour of small- and medium-sized coun- tries. There must be no further dilution of the voting weight of large countries; presi- dencies should be of one year's duration; they should be run by a troika headed by one of the large countries; the big member states should give up one of their two Commissioners in exchange for the five principal portfolios. Germany, for its own peculiar reasons, will be a conscientious objector in this but we should gather sup- port in France, Spain and Italy.

On defence, the heart of sovereignty, we must not accept any move to make the WEU an integral part of the European Union. But this, too, carries an obligation. We must be in the forefront of the work to make the WEU a powerful European defence arm and robust in ensuring that Nato remains its cornerstone. We cannot allow any new member to join WEU as a sort of Euro-friendly soft option unless they have, first, joined the real thing, Nato.

Of course, the heart of the matter is European monetary union and the single currency. Who knows if the technical crite- ria can be met? They are certainly more complex than people imagine. But the real debate is a political one. There are those who believe that a single currency means a single government. They know they don't want that and wish to say 'no' now. Others say, with equal conviction, that you can't have a single market without a single cur- rency. And some, surprisingly von Hayek amongst them, question the value and the reality of economic sovereignty itself. A decision of this magnitude could not possi- bly be taken without the specific endorse- ment of Parliament and, more than likely, a referendum.

But wait. The likelihood is that in 1999 — or maybe beyond — Britain will be a convergent country: able, but perhaps reluctant, to join the Monetary Union. Who more suited to broker between those who are able and keen and those who are keen but unable? The possibilities are end- less. There could be an irreversible split. But I myself would place a small wager on the hard ecu as the device that will hold the Union together. We should keep all our options open and hope this may be the last time Britain enjoys that grim satisfaction of being right in the end.

So the Tory party must now decide whether or not it can rally behind a pro- gramme of National Europeanism. That is what I believe the Government will offer. No more, but no less either. Not as much as the more communautaire amongst us might wish nor a shoot-to-kill policy against any initiative whatever. Accept it we must. Withdrawal, though a perfectly arguable proposition, is an election loser unlikely to find a leader or a party.

The Tory party, committed to the Euro- pean Union, will remain a national party, unashamed of its patriotism, and yet gener- ous and broad enough to recognise with Professor Howard that 'the intermingling of Italian, French, Spanish, English and German constitute a common European cultural core. No culture is complete and adequate in itself. Deprived of constant cross-fertilisation, it loses all creativity.'

In the coming months we need to recap- ture that spirit of broad generosity amongst ourselves and there is no better, more diffi- cult or more important issue on which to do so than Europe.

Tristan Garel-Jones, Conservative MP for Watford, was minister of state at the Foreign Office from 1990-1993.