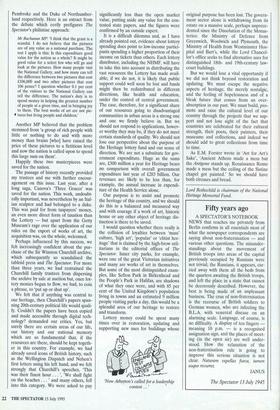 A SPECTATOR'S NOTEBOOK NEWS that reaches me privately from Berlin confirms in all essentials most of what the newspaper correspondents are saying about non-fraternisation — and various other questions. The misunder- standings about the movement of British troops into areas of the capital previously occupied by Russians were not trivial; the Russians, it appears, car- ried away with them all the beds from the quarters awaiting the British troops, and left the place in a state that cannot be decorously described. However, the best is being made of an unpleasant business. The crux of non-fraternisation is the recourse of British soldiers to German women, who are infecting the B.L.A. with venereal disease on an alarming scale. Language, of course, is no difficulty. A display of ten fingers — meaning 10 p.m. — is a recognised assignation sign, and the places of meet- ing (in the open air) are well under- stood. How the relaxation of the non-fraternisation rule is going to improve this serious situation is not clear. Naturam expellas furca, tamen usque recurret.