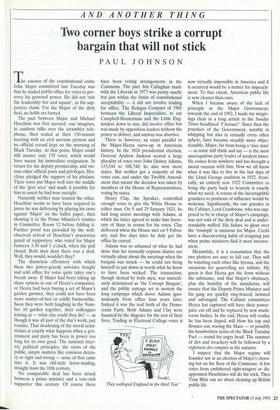 Two corner boys strike a corrupt bargain that will not stick

he essence of the constitutional crime John Major committed last Tuesday was that he traded public office for votes to pre- serve his personal power. He did not 'win the leadership fair and square', as his sup- porters claim. For the Major of the dirty deal, no holds are barred.

The pact between Major and Michael Heseltine was first mooted, one imagines, in cautious talks over the scrambler tele- phone, then sealed at their 150-minute meeting with no civil servants present and no official record kept on the morning of Black Tuesday. At that point, Major could still muster only 170 votes, which would have meant his immediate resignation. In return for the deputy premiership, and var- ious other official posts and privileges, Hes- eltine pledged the support of his phalanx. Their votes put Major well into the middle of the 'grey area' and made it possible for him to assert he had won outright.

Naturally neither man trusted the other. Heseltine seems to have been required to prove he was delivering by placing his cross against 'Major' on the ballot paper, then showing it to the Prime Minister's trusties in Committee Room 12 before folding it.

Further proof was provided by the well- observed arrival of Heseltine's praetorian guard of supporters, who voted for Major between 3.30 and 5 o'clock, when the poll closed. Both men deny there was a deal. Well, they would, wouldn't they?

The shameless effrontery with which these two power-greedy arrivistes bought and sold office for votes quite takes one's breath away. If Major had been taking up share options in one of Hezza's companies, or Hezza had been buying a set of Major's garden gnomes, they could not have been more matter-of-fact or coldly businesslike.

Soon they were both laughing in the Num- ber 10 garden together, their colleagues joining in — what else could they do? — as though it was all part of the day's work; just routine. That deadening of the moral sensi- tivities is exactly what happens when a gov- ernment and party has been in power too long for its own good. The national inter- est, political principles, the views of the public, simple matters like common decen- cy or right and wrong — none of that came into it. It was old-style horse-trading, straight from the 18th century.

No comparable deal has been struck between a prime minister and a vote-rich supporter this century. Of course there have been voting arrangements in the Commons. The pact Jim Callaghan made with the Liberals in 1977 was pretty smelly but just within the limits of constitutional acceptability — it did not involve trading for office. The Relugas Compact of 1905 between the Liberal Imperialists, to cut Campbell-Bannerman and the Little Eng- landers down to size, did involve office but was made by opposition leaders without the power to deliver, and anyway was abortive.

There is, however, an exact parallel to the Major-Hezza carve-up in American history. In the 1824 presidential election, General Andrew Jackson scored a large plurality of votes over John Quincy Adams, 153,544 to 108,740; he also won more states. But neither got a majority of the votes cast, and under the Twelfth Amend- ment that meant the decision was taken by members of the House of Representatives, voting by states.

Henry Clay, the Speaker, controlled enough votes to give the White House to either man. On 9 and 29 January 1825, he had long secret meetings with Adams, at which the latter agreed to make him Secre- tary of State in return for his votes. Clay delivered when the House met on 9 Febru- ary, and five days later he duly got the office he craved.

Adams was so ashamed of what he had done that his normally copious diaries are virtually silent about the meetings when the bargain was struck — he could not bring himself to put down in words what he knew to have been wicked. The transaction, though denied by both men, was immedi- ately denounced as 'the Corrupt Bargain', and the public outrage set in motion the long campaign which drove Adams igno- miniously from office four years later. Indeed it was the real birth of the Demo- cratic Party. Both Adams and Clay were haunted by the disgrace for the rest of their lives. Trading in Electoral College votes is 'They walloped England in the third Test.' now virtually impossible in America and if it occurred would be a matter for impeach- ment. To that extent, American public life is now cleaner than ours.

When I became aware of the lack of principle in the Major Government, towards the end of 1992, I made my misgiv- ings clear in a long article in the Sunday Times headlined TAccusel'. Since then the practices of the Government, notably in whipping but also in virtually every other sphere, have become steadily more objec- tionable. Major, far from being a 'nice man' — as some still think and say — is the most unscrupulous party leader of modern times. He comes from nowhere and has brought a moral vacuum with him. Now we all know what it was like to live in the last days of the Lloyd George coalition in 1922. Ironi- cally, an entirely new 1922 Committee to bring the party back to honesty is exactly what we need. A return of the incorruptible grandees to positions of influence would be welcome. Significantly, the one grandee in the Cabinet, Lord Cranborne, who was sup- posed to be in charge of Major's campaign, was not told of the dirty deal and is under- standably miffed. His failure to gloat over the 'triumph' is ominous for Major. Cecils have a disconcerting habit of resigning just when prime ministers find it most inconve- nient.

Meanwhile, it is a consolation that the two plotters are sure to fall out. They will be watching each other like hyenas, and the occasions for quarrelling are infinite. My guess is that Hezza got the form without the substance, and that Major's obstinacy, plus the hostility of the mandarins, will ensure that the Deputy Prime Minister and his gang are quickly ring-fenced, isolated and sabotaged. The Cabinet committees Hezza has captured will have their power- juice cut off and be replaced by new mush- room bodies. In the end, Hezza will realise he has been duped, will blow his top and flounce out, waving the Mace — or possibly his handwritten notes of the Black Tuesday Pact — round his angry head. The summer of dirt and treachery will be followed by a reglement des comptes in the autumn.

I suspect that the Major regime will founder not at an election of Major's choos- ing but on the floor of the Commons. A few votes from embittered right-wingers or dis- appointed Heseltinies will do the trick. Then Tony Blair can set about cleaning up British public life.