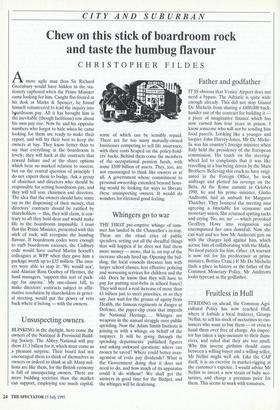 Amore agile man than Sir Richard Greenbury would have hidden in the sta- tionery cupboard when the Prime Minister came looking for him. Caught flat-footed at his desk at Marks & Spencer, he found himself volunteered to lead the inquiry into bpardroom pay. All it has brought him is the inevitable (though factitious) row about his own pay rise. Now he and his opposite numbers who forgot to hide when he came looking for them are ready to make their report, and will try their best to keep the owners at bay. They know better than to say that everything in the boardroom is lovely; they will hack at the contracts that reward failure and at the share options which bear no marked relation to success, but on the central question of principle I do not expect them to budge. Ask a group of chairmen and directors who should be responsible for setting boardroom pay, and they will tell you: chairmen and directors. The idea that the owners should have some say in the dispensing of their money, that directors' contracts should be ratified by shareholders — this, they will claim, is con- trary to all they hold dear and would make life in the boardroom impossible. I trust that the Prime Minister, presented with this stick of rock, will recognise the humbug flavour. If boardroom codes were enough to curb boardroom excesses, the Cadbury code would have curbed Martin Sorrell's colleagues at WPP when they gave him a package worth up to £35 million. The own- ers were able to stop it: 'We would not', said Alastair Ross Goobey of Hermes, the fund managers, 'support this sort of pack- age for anyone.' My one-clause bill, to make directors' contracts subject to affir- mative resolution by shareholders in gener- al meeting, would put the power of veto back where it belong — with the owners.

BLINKING in the daylight, here come the owners of the National & Provincial Build- ing Society. The Abbey National will pay them £1.3 billion for it, which must come as a pleasant surprise. Their board had not encouraged them to think of themselves as owners or indeed to think at all. Many mil- lions are like them, for the British economy is full of unsuspecting owners. There are more building societies than the market can support, employing too much capital, some of which can be sensibly repaid. There are far too many mutually-owned businesses competing to sell life assurance, with their costs heaped on the policy-hold- ers' backs. Behind them come the members of the occupational pension funds, with some £500 billion of assets. They, too, are not encouraged to think like owners or at all. A government whose commitment to personal ownership extended beyond hous- ing would be looking for ways to liberate these unsuspecting owners. It would do wonders for electoral good feeling.

THE FIRST pre-emptive whinge of sum- mer has landed in the Chancellor's in-tray. These are the ritual cries of public spenders, setting out all the dreadful things that will happen if he does not find them more money — more, that is, on top of the increase already lined up. Opening the bid- ding, the local councils threaten him with larger school classes, less effective policing and worsening services for children and the old. Does he know that they will have to pay for putting seat-belts in school buses? They will need a real increase of more than £1 billion just to meet priorities, or so they say. Just wait for the groans of agony from Health, the famous regiments in danger at Defence, the paper-clip crisis that imperils the National Heritage. . . Whinges are weapons in the annual struggle over public spending. Now the Adam Smith Institute is joining in with a whinge on behalf of the taxpayer. It will be going through the spending departments' published figures and asking awkward questions: where can money be saved? Where could better man- agement of costs pay dividends? What is the Government doing that it does not need to do, and how much of its apparatus could it do without? We shall get the answers in good time for the Budget, and the whinges will be deafening.

IT IS obvious that Venice Airport does not need a bypass. The Adriatic is quite wide enough already. This did not stop Gianni De Michelis from sharing a £400,000 back- hander out of the contract for building it — a piece of imaginative finance which has now earned him four years in prison. I know someone who will not be sending him food parcels. Looking like a younger and loopier John Harvey-Jones, Mr De Miche- lis was his country's foreign minister when Italy held the presidency of the European commission. His touch on the steering- wheel led to complaints that it was like travelling in a bus being driven by the Marx Brothers. Believing this crack to have origi- nated in the Foreign Office, he took umbrage and plotted his revenge on the Brits. At the Rome summit in October 1990, he and his prime minister, Giulio Andreotti, laid an ambush for Margaret Thatcher. They bounced the meeting into agreeing a timetable for economic and monetary union. She returned spitting tacks and crying 'No, no, no' — which provoked Geoffrey Howe into resignation and encompassed her own downfall. Now she can wait and see how Mr Andreotti gets on with the charges laid against him, which accuse him of collaborating with the Mafia. No food parcels for him, either. (A warrant is now out for his predecessor as prime minister, Bettino Craxi.) If Mr De Michelis finds a place in history as the father of the Common Monetary Policy, Mr Andreotti looks typecast as the godfather.

STRIDING on ahead, the Common Agri- cultural Policy has now reached Hull, where it forbids a local fruiterer, George Nellist, to sell his stock of nectarines to cus- tomers who want to buy them — or even to hand them over free of charge. An inspec- tor has taken a tape-measure to their diam- eters, and ruled that they are too small. Why this inverse girthism should come between a willing buyer and a willing seller, Mr Nellist might well ask. Like the CAP itself, it is an exercise in market-rigging at the customer's expense. I would advise Mr Nellist to invent a new strain of baby nec- tarines, and charge a premium price for them. This seems to work with tomatoes.