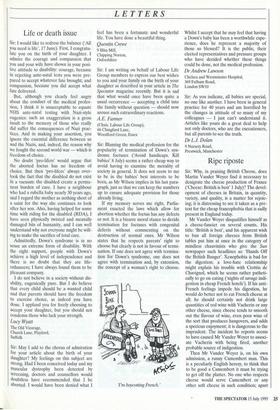 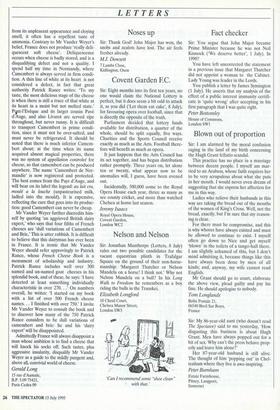 Sir: Why, in praising British Cheese, does Martin Vander Weyer find it necessary to denigrate the cheese production of France ('Cheese: British is best' 1 July)? The devel- opment of cheeses in Britain, in quantity, variety, and quality, is a matter for rejoic- ing; it is distressing to see it taken as a pre- text for the cheap francophobia that is sadly present in England today.

Mr Vander Weyer disqualifies himself as a cheese-fancier on several counts. His title: 'British is best', and his apparent wish to ban all foreign cheeses from British tables put him at once in the category of mindless chauvinists who give the Sun newspaper such headlines as: 'Hands Off the British Banger'. Xenophobia is bad for the digestion; a love-hate relationship might explain his trouble with Crottin de Chavignol, which he seems rather patheti- cally to go on eating ('nights of savage indi- gestion in cheap French hotels'). If his anti- French feelings impede his digestion, he would do better not to eat French cheese at all; he should certainly not drink large quantities of red wine with Vacherin or any other cheese, since cheese tends to smooth out the flavour of wine, even poor wine of the sort that produces hangovers, and adds a specious enjoyment; it is dangerous to the imprudent. The incident he reports seems to have caused Mr Vander Weyer to associ- ate Vacherin with being fired, another probable source of indigestion.

Then Mr Vander Weyer is, on his own admission, a runny Camembert man. This is a peculiarly English heresy, to think that to be good a Camembert it must be trying to get off the platter. No one who respects cheese would serve Camembert or any other soft cheese in such condition; apart from its unpleasant appearance and cloying smell, it often has a repellent taste of ammonia. Contrary to Mr Vander Weyer's belief, France does not produce 'really deli- quescent soft cheese'. Deliquescence occurs when cheese is badly stored, and is a disqualifying defect and not a quality. I spend half my time in Normandy, where Camembert is always served in firm condi- tion. A thin line of white at its heart is not considered a defect, in fact that great authority Patrick Rance writes: `To my taste, the most delicious stage of the cheese is when there is still a trace of that white at its heart in a moist but not melted state.' Pint-l'Eveque and its larger cousin Pave d'Auge, and also Livarot are served ripe throughout, but never runny. It is difficult to transport Camembert in prime condi- tion, since it must not be over-salted, and must never be refrigerated. It should be noted that there is much inferior Camem- bert about; at the time when its name acquired almost magical properties, there was no system of appellation controlee for cheese, so that camembert can be produced anywhere. The name 'Camembert de Nor- mandie' is now registered and protected. The best comes from the Pays d'Auge, and will bear on its label the legend: au lait cm, moule a la louche (unpasteurised milk, ladled into the mould). It is expensive, reflecting the care that goes into its produc- tion: good Camembert can never be cheap.

Mr Vander Weyer further discredits him- self by quoting 'an aggrieved British dairy expert,' who says that four fifths of French cheeses are 'dull variations of Camembert and Brie,' This is utter rubbish. It is difficult to believe that this dairyman has ever been in France. It is ironic that Mr Vander Weyer should refer approvingly to Patrick Rance, whose French Cheese Book is a monument of scholarship and industry. Patrick Rance includes well over 300 named and un-named goat cheeses in his splendid book, and of these, he says: 'I have detected at least something individually characteristic in over 270. . On numbers overall, he writes: 'I started on my book with a list of over 500 French cheese names. . . I finished with over 750.' I invite Mr Vander Weyer to consult the book and to discover how many of the 750 Patrick Rance considers to be dull variations of camembert and brie; he and his 'dairy expert' will be disappointed.

Admittedly France will always disappoint a man whose ambition is to find a cheese that will knock his socks off. Such tastes, plus aggressive insularity, disqualify Mr Vander Weyer as a guide to the mildly pungent and, above all, convivial world of cheese.