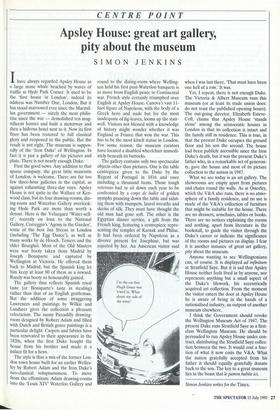 Ihave always regarded Apsley House as a large stone whale beached by waves of traffic at Hyde Park Corner. It used to be the 'first house in London', indeed its address was Number One, London. But it has stood marooned ever since the Macmil- lan government — surely the most philis- tine since the war — demolished ten mag- nificent houses and built a motorway and then a hideous hotel next to it. Now its first floor has been restored to full classical glory and reopened to the public. But the result is not right. The museum is suppos- edly of the 'Iron Duke' of Wellington. In fact it is just a gallery of his pictures and plate. There is not nearly enough Duke.

First the good news. Any addition to that sparse company, the great little museums of London, is welcome. There are far too few three-hour galleries in the capital, as against exhausting three-day ones. Apsley House is not quite in the Wallace or Ken- wood class, but its four drawing-rooms, din- ing-room and Waterloo Gallery overlook- ing Hyde Park are more than worth a detour. Here is the Velazquez Water-sell- er', recently on loan to the National Gallery, Correggio's 'Agony in the Garden', some of the best Jan Steens in London (including 'The Egg Dance'), as well as many works by de Hooch, Teniers and the elder Brueghel. Most of the Old Masters were war booty taken from Madrid by Joseph Bonaparte and captured by Wellington at Victoria. He offered them back to Madrid, but the Spanish king let him keep at least 80 of them as a reward. Rarely was booty so honourably gained.

The gallery thus reflects Spanish royal taste (or Bonaparte's taste in stealing) rather than that of an English gentleman. But the addition of some swaggering Lawrences and paintings by Wilkie and Landseer gives the collection a pleasant eclecticism. The sunny Piccadilly drawing- room designed by Robert Adam and filled with Dutch and British genre paintings is a particular delight. Carpets and fabrics have been renovated to their appearance in the 1820s, when the first Duke bought the house from his brother and made it a palace fit for a hero.

The style is thus a mix of the former Lon- don town house built for an earlier Welles- ley by Robert Adam and the Iron Duke's neo-classical voluptuousness. To move from the effeminate Adam drawing-rooms into the 'Louis XIV' Waterloo Gallery and round to the dining-room where Welling- ton held his first post-Waterloo banquets is to move from English peace to Continental war. French style certainly triumphed over English at Apsley House. Canova's vast 11- foot figure of Napoleon, with the body of a Greek hero and nude but for the most inadequate of fig-leaves, looms up the stair- well. Visitors not blessed with a knowledge of history might wonder whether it was England or France that won the war. This has to be the most kitsch statue in London. For some reason, the museum curators have located a disabled wheelchair immedi- ately beneath its buttocks.

The gallery contains only two spectacular objects other than pictures. One is the table centrepiece given to the Duke by the Regent of Portugal in 1816 and once including a thousand items. Those tough veterans had to sit down each year to be confronted by a corps de ballet of golden nymphs prancing down the table and salut- ing them with trumpets, laurel wreaths and skeins of silk. They must have thought the old man had gone soft. The other is the Egyptian dinner service, a gift from the French king, featuring a centrepiece repre- senting the temples of Karnak and Philae. It had been ordered by Napoleon as a divorce present for Josephine, but was rejected by her. An American visitor said when I was last there, 'That must have been one hell of a row.' It was.

Yet, I repeat, there is not enough Duke. The Victoria & Albert Museum runs this museum (or at least its trade union does: do not trust the published opening hours). The out-going director, Elizabeth Esteve- Coll, claims that Apsley House 'stands alone' among the aristocratic houses in London in that its collection is intact and the family still in residence. This is true, in that the present Duke occupies the ground floor and his son the second. The house had been publicly accessible since the Iron Duke's death, but it was the present Duke's father who, in a remarkable act of generosi- ty, gave the house and most of its picture collection to the nation in 1947.

What we see today is an art gallery. The showrooms are empty apart from pictures and chairs round the walls. As at Osterley, which the V&A also runs, there is no atmo- sphere of a family residence, and no use is made of the V&A's collection of furniture that might be suitable for the house. There are no dressers, armchairs, tables or books.

There are no notices explaining the rooms and nothing, apart from literature in the bookstall, to guide the visitor through the Duke's career or indicate the significance of the rooms and pictures on display. I fear it is another instance of great art gallery, pity about the museum.

Anyone wanting to see Wellingtoniana can, of course. It is displayed ad infinitum at Stratfield Saye. But it is sad that Apsley House neither feels lived in by anyone, nor represents anything but a small aspect of the Duke's lifework, his eccentrically acquired art collection. From the moment the visitor enters the door at Apsley House he is aware of being in the hands of a nationalised industry, an outpost of another museum elsewhere.

I think the Government should revoke the Wellington Museum Act of 1947. The present Duke runs Stratfield Saye as a first- class Wellington Museum. He should be persuaded to run Apsley House under con- tract, distributing the Stratfield Saye collec- tion between the two. It would cost a frac- tion of what it now costs the V&A. What the nation gratefully accepted from his father it should equally gratefully donate back to the son. The key to a great museum lies in the boast that le patron habite icL Simon Jenkins writes for the Times.