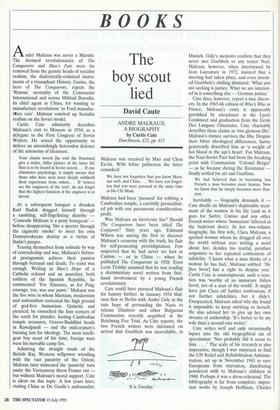 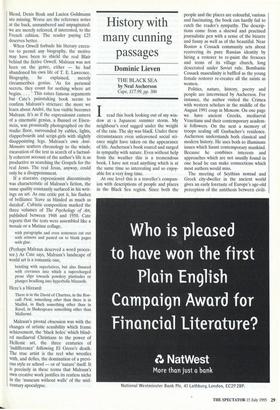 ANDRE MALRAUX: A BIOGRAPHY by Curtis Cate Hutchinson, £25, pp. 415 Andre Malraux was never a Marxist. The doomed revolutionaries of The Conquerors and Man's Fate were far removed from the granite heads of socialist realism, the dialectically-ordained instru- ments of a triumphant History. Garine, the hero of The Conquerors, rejects the 'Roman' mentality of the Communist International and scorns Mikhail Borodin, its chief agent in China, for wanting to manufacture revolutions 'as Ford manufac- tires cars'. Malraux vomited up Socialist realism on the Soviet model.

Curtis Cate admirably describes Malraux's visit to Moscow in 1934, as a delegate to the First Congress of Soviet Writers. He seized the opportunity to deliver an astonishingly heterodox defence of the autonomy of literature.

Your classic novels [he told the Russians] give a richer, fuller picture of the inner life than is to be found in Soviet novels. .. If one eliminates psychology, it simply means that those who have seen most deeply withhold their experience from others.. . If 'writers are the engineers of the soul', do not forget that the highest function of the engineer is to invent.

At a subsequent banquet a drunken Karl Radek dragged himself through a rambling, self-flagellating diatribe — 'Comrade Malraux is a petty bourgeois' — before disappearing 'like a spectre through the cigarette smoke' to meet his own Dostoyevskyean destiny as a victim of Stalin's purges.

Tearing themselves from solitude by way of comradeship and war, Malraux's fiction- al protagonists achieve their passion through betrayal and death. To resist was enough. Writing in Man's Hope of a Catholic colonel and an anarchist, both soldiers of the Spanish Republic, he commented: 'For Ximenes, as for Puig, courage, too, was une patrie.' Malraux was the live wire in whom Marxism, modernism and nationalism contested the high- ground of god-free humanism. Quixotic and piratical, he ransacked the four corners of the earth for plunder, looting Cambodian temple treasures, Graeco-Buddhist heads in Rawalpindi — and the mid-century's burning lust for ideology. The most intelli- gent boy scout of his time, foreign wars were his movable camp fire.

Admiring the straight roads of the British Raj, Western willpower wrestling with the vast passivity of the Orient, Malraux later witnessed the 'passivity' turn nasty: the Vietnamese threw France out — but without Malraux's moral support. Cate is silent on this topic. A few years later, visiting China as De Gaulle's ambassador, Malraux was received by Mao and Chou En-lai. With feline politeness the latter remarked:

Malraux had been 'pursued' for robbing a Cambodian temple, a carefully premeditat- ed job with one paramount consideration, profit.

Was Malraux an inveterate liar? Should The Conquerors have been titled The Conjurors? Sixty years ago, Edmund Wilson was among the first to discover Malraux's economy with the truth, his flair for self-promoting prestidigitation. Few suspected that he had never set foot in Canton — or in China — when he published The Conquerors in 1928. Even Leon Trotsky assumed that he was reading a documentary novel written from first- hand involvement by a young French revolutionary.

Cate could have pursued Malraux's flair for fantasy further. In January 1934 Mal- raux flew to Berlin with Andre Gide in the vain hope of persuading the Nazis to release Dimitrov and other Bulgarian Communists recently acquitted at the Reichstag Fire Trial. As Cate reports, the two French writers were informed on arrival that Goebbels was unavailable, in 'It is Tuesday.' Munich. Gide's memoirs confirm that they never met Goebbels or any senior Nazi.

Malraux, however, when interviewed by Jean Lacouture in 1972, insisted that a meeting had taken place, and even invent- ed Goebbels's chilling dismissal: 'What you are seeking is justice. What we are interest- ed in is something else — German justice.'

Cate does, however, report a nice discov- ery. In the 1965-66 edition of Who's Who in France, Malraux's entry is apparently garnished by attendance at the Lycee Condorcet and graduation from the Ecole Des Langues Orientales. Cate charitably describes these claims as two glorious fibs'. Malraux's stature survives the fibs. Despite their bitter ideological differences, Sartre generously described him as 'a weight of hot blood in the age's heart'. For Malraux, the Nazi-Soviet Pact had been the breaking point with Communism. 'Colonel Berger' — as he became during the Resistance — finally settled for art and Gaullism.

We had believed that in becoming less French a man becomes more human. Now we know that he simply becomes more Rus- sian.

Inevitably — biography demands it — Cate dwells on Malraux's deplorable treat- ment of the women in his life (and so it goes for Sartre, Camus and any other French writer whose 'humanism' faltered at the bedroom door). In her two-volume biography, his first wife, Clara Malraux, a spirited woman whom he dragged all over the world without ever writing a word about her, derides his tearful, petulant responses to her repeated confessions of infidelity. 'I know what a man thinks of a woman he has had,' Malraux sobbed. 'He [her lover] has a right to despise you.' Curtis Cate is contemptuous; such a reac- tion was 'worthy of an immature Julien Sorel, not of a man of the world'. It might have put Clara off further confessions, if not further infidelities, but it didn't. Exasperated, Malraux asked why she found it impossible to keep anything to herself. He also advised her to give up her own dreams of authorship: 'It's better to be my wife thania second-rate writer.'

Cate writes well and only occasionally lapses into the old biographical sin of speculation: 'Nor probably did it occur to him. . . . ' The scale of his research is also impressive, though I was surprised to find the UN Relief and Rehabilitation Adminis- tration, set up in November 1943 to save Europeans from starvation, distributing powdered milk to Malraux's children in 1940. Perhaps it was a dress-rehearsal. The bibliography is far from complete; impor- tant works by Joseph Hoffman, Charles Blend, Denis Boak and Lucien Goldmann are missing. Worse are the reference notes at the back, unnumbered and unpaginated: we are merely referred, if interested, to the French edition. The reader paying £25 deserves better.

When Orwell forbade his literary execu- tor to permit any biography, the motive may have been to shield the real Blair behind the fictive Orwell. Malraux was not keen on the genre, either — he had abandoned his own life of T. E. Lawrence. Biography, he explained, merely circumscribes genius. 'As for personal secrets, they count for nothing where art begins. . . . 'This raises famous arguments but • Cate's painstaking book seems to confirm Malraux's stricture: the more we learn about Andre, the less visible becomes Malraux. It's as if the expressionist camera of a cinematic genius, a Bunuel or Eisen- stein, was prosaically photographed on the studio floor, surrounded by cables, lights, clapperboards and script-girls with slightly disappointing legs. Malraux's own Anti- Memoirs scatters chronology to the winds; excavation of the text in search of a factual- ly coherent account of the author's life is as productive as searching the Gospels for the real Jesus. The real Jesus, anyway, could only be a disappointment.

If a staccato, expressionist discontinuity was characteristic of Malraux's fiction, the same quality constantly surfaced in his writ- ings on art. As one critic put it, his flashes of brilliance 'leave us blinded as much as dazzled'. Cubistic composition marked the three volumes of The Psychology of Art, published between 1948 and 1950. Cate reports that the texts were assembled like a mosaic or a Matisse collage,

with paragraphs and even sentences cut out with scissors and pasted on to blank pages with glue.

(Perhaps Malraux deserved a word proces- sor.) As Cate says, Malraux's landscape of world art is a romantic one,

bristling with superlatives, but also fissured with crevasses into which a supercharged prose slips towards powdery platitudes or plunges headlong into hyperbolic blizzards.

Malraux's pivotal obsession was with the changes of artistic sensibility which frame achievement, the 'black holes' which blind- ed mediaeval Christians to the power of Hellenic art, the three centuries of 'indifference' following El Greco's death. The true artist is the reel who wrestles with, and defies, the domination of a previ- ous style or school — or of 'nature' itself. It is precisely in these terms that Malraux's own creative work justifies its restless niche in the 'museum without walls' of the mid- century apocalypse.