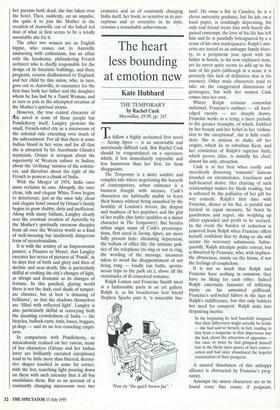 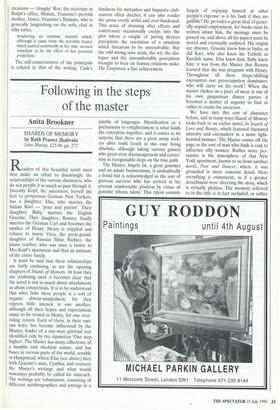 THE TEMPORARY by Rachel Cusk Macmillan, 0.99, pp. 245 Tfollow a highly acclaimed first novel — Saving Agnes — is an unenviable and notoriously difficult task. But Rachel Cusk should be congratulated on a successor, which, if less immediately enjoyable and less humorous than her first, far from disappoints.

The Temporary is a more sombre and complex tale where negotiating the hazards of contemporary, urban existence is a business fraught with menace. Cusk's characters are habitually unable to leave their homes without being assaulted by the hostility of London's streets, the despair and madness of her populace and the glut of her traffic (the latter qualifies as a minor character in The Temporary). But besides urban angst many of Cusk's preoccupa- tions, first aired in Saving Agnes, are more fully present here: alienating depression; the tedium of office life; the intricate poli- tics of the telephone (to ring or not to ring, the wording of the message, measures taken to avoid the disappointment of not being rung — loudly run baths, sponta- neous trips to the park etc.); above all the vicissitudes of ill-conceived romance.

Ralph Loman and Francine Snaith meet at a fashionable party in an art gallery. Ralph is, as his treacherous best friend Stephen Sparks puts it, 'a miserable bas- 'Now by "the quick brown fax".' tard'. He owns a flat in Camden, he is a clever university graduate, but his job, on a local paper, is crushingly depressing, his only real friend treats him with barely dis- guised contempt, the love of his life has left him and he is painfully beleaguered by a a sense of his own inadequacies. Ralph's mis- eries are traced to an unhappy family histo- ry, to a peripatetic year spent with his father in hotels, to his now orphaned state, yet he never quite seems to add up to the sum of his parts (although in a sense it is precisely this lack of definition that is his essence). Other male characters tend to take on the exaggerated dimensions of grotesques, but with her women Cusk comes into her own.

Where Ralph remains somewhat indistinct, Francine's outlines — all hard- edged vacuity — are sharply drawn. Francine works as a temp, a mere prelude to the greater triumphs, of which, fortified by her beauty and her belief in her 'ordina- tion to the exceptional', she is fully confi- dent. She is anxious to shake off her origins, which lie in suburban Kent, and her conviction of Ralph's superior birth, which proves false, is initially his chief, almost his only, attraction.

Cusk is at her best when coolly and mercilessly dissecting 'romantic' liaisons founded on circumstance, loneliness and half-hearted desire. Her charting of such relationships makes for bleak reading, but is softened by the palliative of her gift for wry comedy. Ralph's first date with Francine, dinner at his flat, is painful and farcical in equal measure, he -beset by gaucheness and regret, she weighing up effort expended and profit to be accrued. In the event the burden of seduction is removed from Ralph when Francine offers herself, confident that by doing so she will secure his necessary submission. Subse- quently, Ralph attempts polite retreat, but is thwarted by Francine, who, with implaca- ble obtuseness, insists on the forms, if not the feelings of coupledom.

It is not so much that Ralph and Francine have nothing in common; they have no liking for each other. Indeed Ralph entertains fantasies of inflicting injury on his unwanted girlfriend. Francine's self-belief falters in the face of Ralph's indifference, but this only bolsters her need for conquest. Ralph sinks into despairing inertia:

In the beginning he had fancifully imagined that their differences might actually be fertile — she had said so herself, in fact, reading to him from a magazine in that impervious way she had, about the attraction of opposites — but once or twice he had glimpsed himself lost in the bleak open spaces of their conver- sation and had since abandoned the hopeful examination of their prospects.

A natural dissolution of this unhappy alliance is obstructed by Francine's preg- nancy.

Amongst the minor characters are to be found some fine comic, if poignant, creations — 'doughy' Roz, the secretary in Ralph's office, Maxine, Francine's peevish mother, Janice, Francine's flatmate, who is generally languishing on the sofa, clad in silky robes,

irradiating an intimate warmth which, although it came from the portable heater which panted continually at her side, seemed somehow to be the effect of her personal projection.

The self-consciousness of the principals is echoed in that of the writing. Cusk's fondness for metaphor and linguistic elab- oration often dazzles; it can also render the prose overly artful and over-burdened. This sense of straining after effects and contrivance occasionally creeps into the plot where a couple of jarring devices precipitate the resolution of a situation which threatens to be unresolvable. But the odd wrong note aside, the wit, the dia- logue and the uncomfortable perception brought to bear on human relations make The Temporaty a fine achievement.