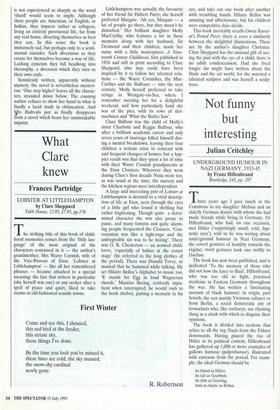 LOBSTER AT LITTLEHAMPTON by Clare Sheppard Tabb House, 12.95, £7.95, pp.176 The striking title of this book of child- hood memories comes from the 'little lan- guage' of the most original of the characters contained in it — the author's grandmother, Mrs Warre Cornish, wife of the Vice-Provost of Eton. 'Lobster at Littlehampton' — like all her remembered phrases — became attached to a special meaning: the fact that writers in particular (she herself was one) or any seeker after a spell of peace and quiet, liked to take rooms in old-fashioned seaside towns. Littlehampton was actually the favourite of her friend Sir Hubert Parry; she herself preferred Margate. `Ah yes, Margate — a lot of people go there, but they musn't be disturbed.' Her brilliant daughter Molly MacCarthy, who features a lot in these memoirs along with her husband, Sir Desmond and their children, made her name with a little masterpiece, A Nine- teenth Century Childhood, first published in 1924 and still in print according to Clare Sheppard, who may easily have been inspired by it to follow her talented rela- tions — the Warre Cornishes, the Mac- Carthys and the Balfours — into the next century. Molly herself preferred to take refuge in Westgate-on-Sea, where I remember meeting her for a delightful weekend, and how particularly fond she was of the pier, with its rows of slot- machines and 'What the Butler Saw'.

Clare Balfour was the child of Molly's sister Charlotte and Reggie Balfour, who after a brilliant academic career and only seven years of marriage killed himself dur- ing a mental breakdown, leaving their four children a serious crisis to contend with and frequent changes of homes; but a hap- pier result was that they spent a lot of time with their Warre Cornish grandparents at the Eton Cloisters. Wherever they went during Clare's first decade Nana went too, as was usual at the time; the nursery and the kitchen regions were interdependent.

A large and interesting part of Lobster at Littlehampton is devoted to a vivid descrip- tion of life at Eton, seen through the eyes of a little girl who found it thrilling but rather frightening. Though quite a deter- mined character she was also prone to panic, and many famous and quite alarm- ing people frequented the Cloisters. 'Con- versation was like a tight-rope and the unforgivable sin was to be boring'. There was G. K. Chesterton — an avowed child- lover, 'especially of babies at the comet stage' (he referred to the long clothes of the period). There was Donald Tovey, so musical that he hummed while talking. He set Hilaire Belloc's Alphabet to music too, 'E stands for Egg in loud Wagnerian chords.' Maurice Baring, restlessly impa- tient when interrupted; he would rush to the book shelves, putting a monocle in his eye, and take out one book after another with trembling hands. Hilaire Belloc was amusing and affectionate, but his children were competitive dare-devils.

This book inevitably recalls Gwen Raver- at's Period Piece; there is even a similarity between the delightful illustrations. These are by the author's daughter Christina. Clare Sheppard has the unusual gift of see- ing the past with the eye of a child; there is no adult condescension. Had she lived longer she might have written about the Slade and the art world, for she married a talented sculptor and was herself a sculp- tress.