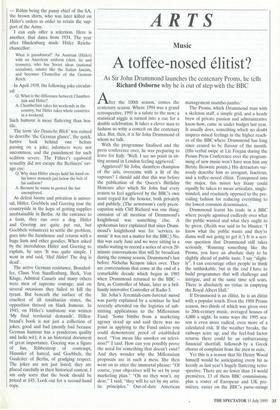 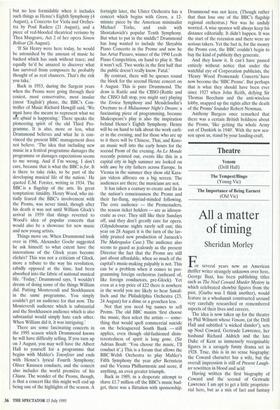 As Sir John Drummond launches the centenary Proms, he tells Richard Osborne why he is out of step with the BBC

Ater the 100th season, comes the centenary season. Where 1994 was a grand retrospective, 1995 is a salute to the new; a statistical niggle is turned into a cue for a double celebration. It takes a clever man to fashion so witty a conceit on the centenary idea. But, then, it is Sir John Drummond of whom we talk.

With the programme finalised and the press conference over, he was preparing to leave for Italy. 'Well, I see no point in sit- ting around in London feeling aggrieved.'

Aggrieved? Sir John, dauntless champion of the arts, overcome with a fit of the vapours? I should add that this was before the publication of the Queen's Birthday Honours after which Sir John had every reason to feel aggrieved by the BBC's own scant regard for the honour, both privately and publicly. (The newsroom's early preoc- cupation with Cliff Richard was one thing; omission of all mention of Drummond's knighthood was something else. A spokesman later explained that since Drum- mond's knighthood was for 'services to music' it was not a matter for the BBC.) No, this was early June and we were sitting in a studio waiting to record a series of seven 20- minute conversations that will be broadcast during the coming season, Drummond's last before Nicholas Kenyon takes over. They are conversations that come at the end of a remarkable decade which began in 1985 when Drummond returned to the BBC - first, as Controller of Music, later as a bril- liantly innovative Controller of Radio 3.

Sir John's Jeremiah-cum-Juvenal mood was partly explained by a seminar he had recently attended on the logistics of sub- mitting applications to the Millennium Fund. 'Some bimbo from a marketing agency stood up and said there was no point in applying to the Fund unless you could demonstrate proof of established need. "You mean like snooker on televi- sion?" I said. How can you possibly prove the need for something that doesn't exist? And they wonder why the Millennium proposals are in such a mess. She then went on to utter the immortal phrase: "Of course, your objectives will be set by your marketing plan." "Oh no they won't, my dear," I said, "they will be set by my artis- tic principles." Out-of-date American management mumbo-jumbo.'

The Proms, which Drummond runs with a skeleton staff, a simple grid, and a heady brew of private passion and administrative know-how, came in under budget last year. It usually does, something which no doubt inspires mixed feelings in the higher reach- es of the BBC where Drummond has long since ceased to be flavour of the month. (His verbal swipe at Liz Forgan during the Proms Press Conference over the program- ming of new music won't have won him any Birtite Brownie points.) His detractors var- iously describe him as arrogant, fractious, and a toffee-nosed elitist. Transposed into the major, this minor key litany could equally be taken to mean articulate, single- minded, and resolutely opposed to the pre- vailing fashion for reducing everything to the lowest common denominator.

Drummond learnt his trade in a BBC where people agonised endlessly over what the public wanted and what they ought to be given. (Reith was said to be blunter: 'I know what the public wants and they're damn well not going to get it.') It is a seri- ous question that Drummond still takes seriously. 'Running something like the Proms, you have an absolute duty to be slightly ahead of public taste. I say "slight- ly". I can encourage other people to think the unthinkable, but in the end I have to build programmes that will challenge and intrigue, and at the same time sell seats. There is absolutely no virtue in emptying the Royal Albert Hall.'

If Drummond is an elitist, he is an elitist with a popular touch. Even the 1988 Proms season, two-thirds of which was given over to 20th-century music, averaged houses of 4,000 a night. In some ways the 1995 sea- son is even more radical, even more of a calculated risk. If the weather breaks, the railways seize up, and the feel-bad factor returns there could be an embarrassing financial shortfall, followed% by a Greek chorus of complaint from the men in suits.

Yet this is a season that Sir Henry Wood himself would be anticipating every bit as keenly as last year's hugely flattering retro- spective. There are no fewer than 14 world premieres, 13 of them BBC commissions, plus a roster of European and UK pre- mieres, easier on the BBC's purse-strings but no less formidable when it includes such things as Henze's Eighth Symphony (4 August), a Concerto for Viola and Orches- tra by Paul Ruders (21 August), and a piece of red-blooded theatrical verismo by Thea Musgrave, Act 2 of her opera Simon Bolivar (26 August).

'If Sir Henry were here today, he would be astonished by the amount of music he backed which has sunk without trace; and equally he'd be amazed to discover what has survived from composers he probably thought of as real chancers. That's the risk you take.'

Back in 1953, during the Sargent years when the Proms were going through their cosiest, most conservative, most insular (most 'English') phase, the BBC's Con- troller of Music Richard Howgill said, 'We mpst have the means to represent what we are afraid is happening.' There speaks the pioneering spirit of the old Third Pro- gramme. It is also, more or less, what Drummond believes and what he is con- vinced the present BBC management does not believe. 'The idea that including new music in a festival programme damages the programme or damages expectations seems to me wrong. And if I'm wrong, I don't care, because that is what the BBC is for. It is there to take risks, to be part of the developing musical life of the nation.' He quoted E.M. Forster, writing in 1934. The BBC is a flagship of the arts. Its great temptation: timidity. Henry Wood, who ini- tially feared the BBC's involvement with the Proms, was never timid, though after his death it was not until William Glock's arrival in 1959 that things reverted to Wood's idea of popular concerts that would also be a showcase for new music and new young artists.

Things move on. When Drummond took over in 1986, Alexander Goehr suggested he ask himself: to what extent have the innovations of the Glock years become clichés? This was not a criticism of Glock, more a tribute to the way his revolution, rabidly opposed at the time, had been absorbed into the fabric of national musical life. "Today,' Drummond says, 'I wouldn't dream of doing some of the things William did. Putting Monteverdi and Stockhausen in the same programme. You simply couldn't get an audience for that now. The Monteverdi audience which is substantial and the Stockhausen audience which is also substantial would simply hate each other. When William did it, it was intriguing.'

There are some fascinating concerts in the 1995 season which Drummond knows he will have difficulty selling. If you turn up on 3 August, you may well have the Albert Hall to yourself for a programme that begins with Mahler's Totenfeier and ends with Henze's lyrical Fourth Symphony; Oliver Knussen conducts, and the concert also includes the world premiere of his Chiara. The wonder of the Proms, though, is that a concert like this might well end up being one of the highlights of the season. A fortnight later, the Ulster Orchestra has a concert which begins with Green, a 12- minute piece by the American minimalist Michael Torke, and ends with Shostakovich's popular Tenth Symphony. But what to put in the middle? Drummond has long wanted to include the Slcryabin Piano Concerto in the Proms and now he has Artur Pizzaro, winner of the 1990 Leeds Piano Competition, on hand to play it. 'But it won't sell. Two works in the first half that the public doesn't really know. Fatal.'

By contrast, there will be queues round the block for the second Henze concert on 4 August. This is pure Drummond. The draw is Rattle and the CBSO (Rattle and the CBSO full stop, you might say) playing the Eroica Symphony and Mendelssohn's Overture to A Midsummer Night's Dream: a fascinating piece of programming, because Shakespeare's play is also the inspiration behind Henze's Eighth Symphony. Henze will be on hand to talk about the work earli- er in the evening, and for those who are up to it there will be Chinese, Thai, and Kore- an music well into the early hours for the second Prom of the evening. As Le Monde recently pointed out, events like this in a capital city in high summer are looked on with awe by city fathers across Europe. In Vienna in the summer they show old Kara- jan videos alfresco on a big screen. The audiences are there; the musicians are not.

It has taken a century to create and fix in the nation's consciousness the Proms and their far-flung, myriad-minded following. The core audience — the Promenaders, the season ticket holders — are as idiosyn- cratic as ever. They still like their Sundays off, and they don't greatly care for opera. (Glyndebourne nights rarely sell out; this year on 28 August it is the turn of the lav- ishly praised new production of Janacek's The Makropulos Case.) The audience also seems to guard as jealously as the present Director the fact that the Proms are still just about affordable, when so much of the capital's music-making palpably is not. This can be a problem when it comes to pro- gramming foreign orchestras (unheard of, like foreign conductors, pre-Glock). Yet even at a top price of £22 there is nowhere in the world you are likely to hear Sawal- lisch and the Philadelphia Orchestra (23, 24 August) for a dime or a groschen less.

Not that you need big names to sell Proms. The old BBC maxim 'first choose the music, then select the artists — some- thing that would spell commercial suicide on the beleaguered South Bank — still applies, even though old-fashioned disin- terestedness of spirit is long gone. (Sir Adrian Boult: 'You choose the music, I'll conduct it'.) This is a forum that allows the BBC Welsh Orchestra to play Mahler's Fifth Symphony the year after Bernstein and the Vienna Philharmonic and score, if anything, an even greater triumph.

Back in 1989, in a desperate attempt to shave £1.7 million off the BBC's music bud- get, there was a flirtation with sponsorship. Drummond was not keen. (Though rather that than lose one of the BBC's flagship regional orchestras.) Nor was he unduly worried. A wise sponsor will always keep his distance editorially. It didn't happen. It was the start of the recession and there were no serious takers. Yet the fact is, for the money the Proms cost, the BBC couldn't begin to buy the kind of publicity they generate.

And they know it. It can't have passed entirely without notice that under the watchful eye of Corporation publicists, the 'Henry Wood Promenade Concerts' have now become the 'BBC Proms'. But perhaps that is what they should have been ever since 1927 when John Reith, defying Sir Thomas Beecham and the anti-wireless lobby, snapped up the rights after the death of the Proms' founder Robert Newman.

Anthony Burgess once remarked that there was a certain British boldness about the Proms, 'like getting the whole Army out of Dunkirk in 1940'. With the new sea- son upon us, stand by your landing-craft.