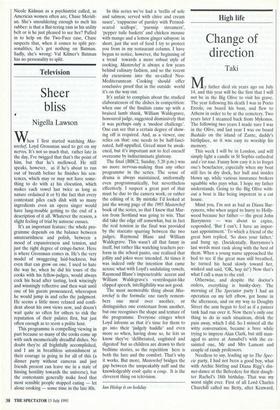 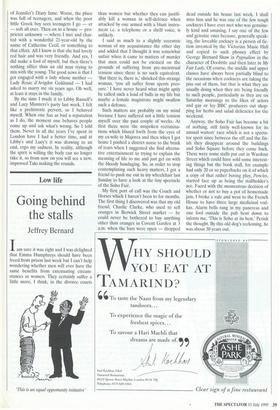 My father died six years ago on July 14, and this year will be the first that I will not be in the Big Olive to visit his grave. The year following his death I was in Porto Ercole, on board his boat, and flew to Athens in order to be at the cemetery. Two years later I steamed back from Mykonos.

The following two years I made sure I was in the Olive, and last year I was on board Bushido on the island of Zante, daddy's birthplace, so it was easy to worship his memory.

This week I will be in London, and will simply light a candle in St Sophia cathedral and c'est tout. Funny how easy it is to forget one's benefactor, especially when my boat still lies in dry dock, her hull and insides blown up, while various insurance brokers squabble who pays what. I hope my father understands. Going to the Big Olive with- out a boat is like being impotent in a cat house.

Mind you, I'm not as bad as Diana Bar- rymore, who when urged to hurry to Holly- wood because her father — the great John Barrymore — was about to expire, responded, 'But I can't, I have an impor- tant appointment.' To which a friend of the great ham replied, `So does your father,' and hung up. (Incidentally, Barrymore's last words must rank along with the best of them. When a young nurse approached the bed to see if the great man still breathed, he turned his head slowly toward her, winked and said, 'OK, hop in!') Now that's what I call a man to the end.

Otherwise, and despite the doctor's orders, everything is hunky-dory. The morning of The Spectator party I had an operation on my left elbow, got home in the afternoon, and on my way to Doughty Street the arm began to feel as if a panzer tank had run over it. Now there's only one thing to do in such situations, drink the pain away, which I did. So I missed all the witty conversation, became a bore while trying to impress Alan Clark, but still man- aged to arrive at Annabel's with the ex- sainted one, Mr and Mrs Lamont and couple of randy professors.

Needless to say, leading up to The Spec- cie party, I had not been a good boy, what with Archie Stirling and Diana Rigg's din- ner-dance at the Belvedere for their daugh- ter Rachel's 18th birthday. That was my worst night ever. First of all Lord Charles Churchill called me Betty, after Kenward, of Jennifer's Diary fame. Worse, the place was full of teenagers, and when the poor little Greek boy sees teenagers I go — er — soft all over. Then on to a house — pro- prietor unknown — where I met and chat- ted with a wonderful 21-year-old by the name of Catherine Cecil, or something to that effect. All I know is that she had lovely red hair and was very friendly. And yes, I did make a fool of myself, but then there's nothing sillier than an old man trying to mix with the young. The good news is that I got engaged with a lady whose mother — Lady Rosie d'Avigdor Goldsmid — I had asked to marry me six years ago. Oh well, at least it stays in the family.

By the time I made it to Libby Russell's and Lucy Manners's party last week, I felt like a prehistoric pervert, so I behaved myself. When one has as bad a reputation as I do, the moment one behaves people come up and ask what's wrong. So I told them. Never in all the years I've spent in London have I had a better time, and at Libby's and Lucy's it was drawing to an end, ergo my sadness. In reality, although the spirit is willing the body can no longer take it, so from now on you will see a new, improved Tald making the rounds.