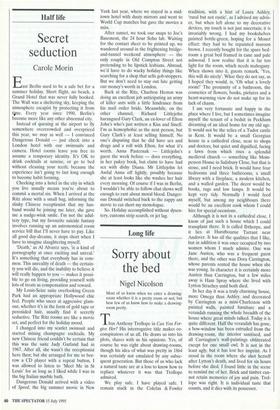 East Berlin used to be a safe bet for a summer holiday. Short flight, no beach, a Grand Hotel that was never fully booked. The Wall was a sheltering sky, keeping the atmosphere escapist by protecting it from time. Every year since 1990, Berlin's become more like any other abnormal city.

Instead of queuing at the airport to fly somewhere overcrowded and overpriced this year, we may as well — I convinced Dangerous Donald — just check into a London hotel with our swimsuits and camera. Hotel rooms leave you free to assume a temporary identity. It's OK to drink cocktails at sunrise, or go to bed without cleaning your teeth; because the experience isn't going to last long enough to become habit forming.

Checking into a hotel in the city in which you live usually means you're about to commit a mortal sin. When I arrived at the Ritz alone with a small bag, informing the slinky Chinese receptionist that my hus- band would be joining me later, she gave me a nudge-wink smile. I'm not the adul- tery type, but my favourite suicide fantasy involves running up an astronomical room service bill that I'll never have to pay. Like all good day-dreams, it stops short when I have to imagine slaughtering myself.

'Death,' as Al Alvarez says, 'is a kind of pornography at once exciting and unreal.' It's something that everybody has in com- mon. This unreality of death — the certain- ty you will die, and the inability to believe it will really happen to you — makes it possi- ble to go on living, providing yourself with lots of treats as compensation and reward.

My Louis-Seize suite overlooking Green Park had an appropriate Hollywood chic feel. People who sneer at aggressive glam- our, whether it's in the form of gold tape or peroxided hair, usually find it secretly seductive. The Ritz rooms are like a movie set, and perfect for the holiday mood.

I changed into my scarlet swimsuit and started mixing champagne cocktails. My new Chinese friend couldn't be certain that this was the suite Judy Garland had in 1967. After all, she wasn't the receptionist here then; but she arranged for me to bor- row a CD player with a repeat button. I was allowed to listen to 'Meet Me in St Louis' for as long as I liked while I was in the big Italian marble bath.

Dangerous Donald arrived with a video of Speed, the big summer movie in New York last year, where we stayed in a mid- town hotel with dusty mirrors and went to World Cup matches but gave the movies a miss.

After sunset, we took our snaps to Joe's Basement, the 24 hour Soho lab. Waiting for the contact sheet to be printed up, we wandered around in the frightening bridge- and-tunnel weekend atmosphere — the only couple in Old Compton Street not pretending to be lipstick lesbians. Abroad, we'd have to do wacky holiday things like searching for a shop that sells gob-stoppers. But we don't need to stay out late getting our money's worth in London.

Back at the Ritz, Charlton Heston was doing an excellent job anticipating an army of killer ants with a little hindrance from his mail order bride. Meanwhile, on the other channel, Richard Littlejohn harangued Gary Clark, an ex-lover of Elton John's who's just written a Kiss and Smell. I'm as homophobic as the next person, but Gary Clark's at least selling himself. No one's disputing that he did have sex and drugs and a roll with Elton, for what it's worth. Anna Pasternak — Littlejohn's guest the week before — does everything, in her pukey book, but claim to have had sex with dishy Diana. Mr Littlejohn let Awful Anna off lightly, possibly because she at least looks like she washes her hair every morning. Of course if I was in Berlin, I wouldn't be able to follow chat shows well enough to rant about moral blood. Danger- ous Donald switched back to the zappy ant movie to cut short my monologue.