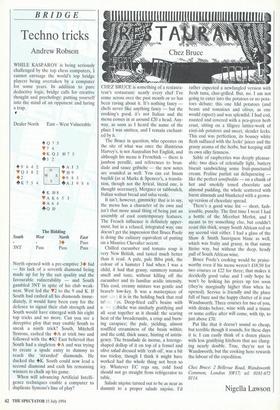 WHILE KASPAROV is being seriously challenged by the top chess computers, I cannot envisage the world's top bridge players being overtaken by a computer for some years. In addition to pure deductive logic, bridge calls for creative thought and psychology; putting yourself into the mind of an opponent and luring a trap.

3NT Pass Pass Pass North opened with a pre-emptive 3* bid — his lack of a seventh diamond being made up for by the suit quality and the favourable vulnerability — and South gambled 3NT in spite of his club weak- ness. West led the V2 to the 9 and K. If South had cashed all his diamonds imme- diately, it would have been easy for the defence to signal their club strength and South would have emerged with his eight top tricks and no more. Can you see a deceptive ploy that may enable South to sneak a ninth trick? South, Mitchell Symons, cashed the •A at trick two and followed with the 4K! East believed that South had a singleton *A and was trying to create a spade entry to dummy to reach the 'stranded' diamonds. He ducked the 4K. South could now lead a second diamond and cash his remaining winners to chalk up his game.

When will advancing Artificial Intelli- gence techniques enable a computer to duplicate Symons's line of play?