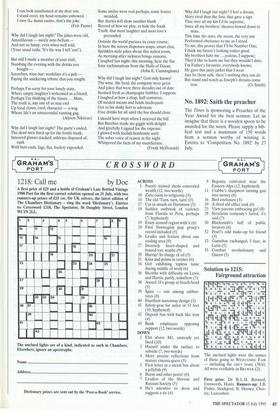 A first prize of £25 and a bottle of Graham's Late Bottled Vintage 1988 Port for the first correct solution opened on 31 July, with two runners-up prizes of £15 (or, for UK solvers, the latest edition of The Chambers Dictionary – ring the word 'Dictionary'). Entries to: Crossword 1218, The Spectator, 56 Doughty Street, London WC1N 2LL.

The unclued lights are of a kind, indicated as such in ( him hers. Elsewhere, ignore an apostrophe.

Address Dictionary prizes are sent out by the Post-a-Book' service. ACROSS 1 Poorly stained sheds concealed wealth (12, two words) 10 Zulu claim to religiosity (4) 14 The old 'Turn, turn, turn' (3) 17 Car in smash on Dartmoor (5) 18 Sudden outbreak of violence from Florida to Peru, perhaps (7, hyphened) 19 Essay around region with it (6) 24 First Norwegian pop group's record included (5) 26 Leader and feature about one trading area (9) 27 Inversely heart-shaped and braced too, maybe (9) 29 Hurray! In charge of oil (5) 31 Kina and palms in ravines (6) 34 Girl exhibiting topless tunic during middle of week (6) 36 Breathe with difficulty on Lewis and Harris, partly, somehow (7) 38 Award 24's group at beach-head

The unclued lights were the names of those going to WIDECOMBE FAIR — including the GREY MARE (38/6). All were verifiable in BREWER (2).