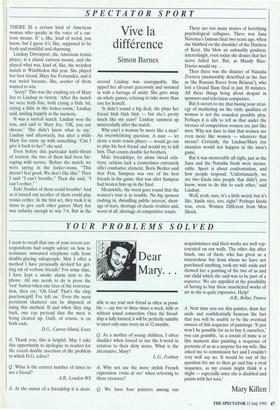 THERE IS a certain kind of American woman who speaks in the voice of a car- toon mouse. It' s, like, kind of weird, you know, but I guess it's, like, supposed to be fresh and youthful and charming.

Lindsay Davenport, the American tennis player, is a classic cartoon mouse, and she played what was, kind of, like, the weirdest match at Wimbledon this year. She played her best friend, Mary Joe Fernandez, and it was weird because, like, neether of them wanted to win.

'Sorry!' This was the exulting cry of Mary Joe to Lindsay in victory. 'After the match we were both fine, both crying a little bit, crying a little in the locker-room,' Lindsay said, smiling happily at the memory.

It was a surreal match. Lindsay won the toss, and said to Mary Joe, 'OK, you can choose.' She didn't know what to say,' Lindsay said afterwards, but after a while Mary Joe came up with something. 'Can I give it back to her?' she said.

Even before this particular knife-thrust of tension, the two of them had been hic- cuping with nerves. 'Before the match, we were saying in the locker-room, "This doesn't feel good. We don't like this." Then I said "I can't breathe." Then she said, "I can't eether." ' Eek! Needier of them could breathe! And as it turned out neether of them could play tennis eether. In the first set, they took it in turns to give each other games; Mary Joe was unlucky enough to win 7-6. But in the second Lindsay was unstoppable. She upped her all-court generosity and stormed in with a barrage of amity. She gave away six whole games, refusing to take more than one for herself.

'It didn't sound a big deal, she plays her friend blah blah blah — but she's pretty much like my sister!' Lindsay summed up mistressfully after the match.

Why can't a woman be more like a man? An overwhelming question. A man — let alone a male tennis player — would go out to play his best friend and would try to kill him. That counts double for brothers.

Male friendships, let alone blood rela- tions, seldom lack a (sometimes extremely silly) combative element. Boris Becker said that Pete Sampras was one of his best friends in the game: that was after Sampras had beaten him up in the final.

Meanwhile, the word goes round that the women's tour is in trouble. No big sponsor rushing in, dwindling public interest, short- age of stars, shortage of classic rivalries and, worst of all, shortage of competitive tennis. There are too many stories of horrifying psychological collapses. There was Jana Novotna's famous final two years ago, when she blubbed on the shoulder of the Duchess of Kent. She blew an unlosable position; interestingly, even today she denies that her nerve failed her. But, as Mandy Rice- Davies would say. . .

Then there was the disaster of Natasha Zvereva (memorably described in the Sun as 'the Russian Raver from Belarus'), who lost a Grand Slam final in just 30 minutes. All these things bring about despair in sponsors and television companies.

But it occurs to me that basing your strat- egy of marketing on the virile qualities of women is not the soundest possible ploy. Perhaps it is silly to tell us that under the stresses of competition women are just like men. Why not dare to hint that women are even more like women — whatever that means? Certainly, the Lindsay/Mary Joe situation would not happen in the men's game.

But it was memorable all right, just as the Jana and the Natasha finals were memo- rable. Sport is about confrontation, and how people respond. 'Unfortunately, we are two lcinda nice people that didn't, you know, want to do this to each other,' said Lindsay.

Well, yeah, sure, it's a little weird, but it's like, lcinda nice, too, right? Perhaps ldnda true, even. Women Different from Men Shock.