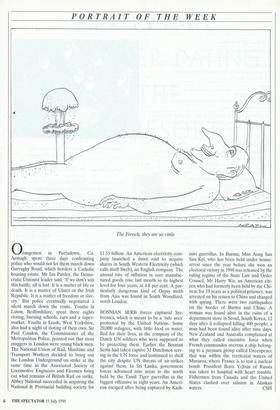 The French, they are so virile.

0 rangemen in Portadown, Co. Armagh, spent three days confronting police who would not let them march down Garvaghy Road, which borders a Catholic housing estate. Mr Ian Paisley, the Demo- cratic Unionist leader said: 'If we don't win this battle, all is lost. It is a matter of life or death. It is a matter of Ulster or the Irish Republic. It is a matter of freedom or slav- ery.' But police eventually negotiated a silent march down the route. Youths in Luton, Bedfordshire, spent three nights rioting, burning schools, cars and a super- market. Youths in Leeds, West Yorkshire, also had a night of rioting of their own. Sir Paul Condon, the Commissioner of the Metropolitan Police, pointed out that most muggers in London were young black men. The National Union of Rail, Maritime and Transport Workers decided to bring out the London Underground on strike at the same time as the Associated Society of Locomotive Engineers and Firemen bring out what remains of British Rail on strike. Abbey National succeeded in acquiring the National & Provincial building society for £1.35 billion. An American electricity com- pany launched a dawn raid to acquire shares in South Western Electricity (which calls itself Sweb), an English company. The annual rate of inflation in core manufac- tured goods rose last month to its highest level for four years, at 4.8 per cent. A par- ticularly dangerous kind of Gypsy moth from Asia was found in South Woodford, north London.

BOSNIAN SERB forces captured Sre- brenica, which is meant to be a 'safe area' protected by the United Nations. Some 20,000 refugees, with little food or water, fled for their lives, in the company of the Dutch UN soldiers who were supposed to be protecting them. Earlier the Bosnian Serbs had taken captive 32 Dutchmen serv- ing in the UN force and continued to shell the city despite UN threats of air-strikes against them. In Sri Lanka, government forces advanced into areas in the north held by the Tamil Tiger guerrillas in the biggest offensive in eight years. An Ameri- can escaped after being captured by Kash- miri guerrillas. In Burma, Miss Aung San Suu Kyi, who has been held under house- arrest since the year before she won an electoral victory in 1990 was released by the ruling regime of the State Law and Order Council. Mr Harry Wu, an American citi- zen who had formerly been held by the Chi- nese for 19 years as a political prisoner, was arrested on his return to China and charged with spying. There were two earthquakes on the border of Burma and China. A woman was found alive in the ruins of a department store in Seoul, South Korea, 12 days after it collapsed killing 400 people; a man had been found alive after nine days. New Zealand and Australia complained at what they called excessive force when French commandos overran a ship belong- ing to a pressure group called Greenpeace that was within the territorial waters of Mururoa, where France is to test a nuclear bomb. President Boris Yeltsin of Russia was taken to hospital with heart trouble. Fishermen from Canada and the United States clashed over salmon in Alaskan