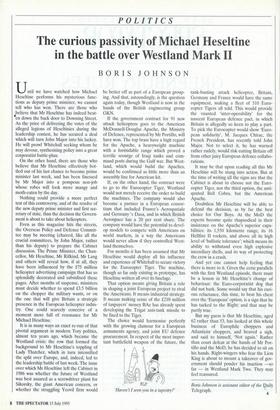 Until we have watched how Michael Heseltine performs his mysterious func- tions as deputy prime minister, we cannot tell who has won. There are those who believe that Mr Heseltine has indeed beat- den down the back door to Downing Street. As the price of delivering the votes of the alleged legions of Heseltinies during the leadership contest, he has secured a deal which will turn John Major into his lackey. He will prowl Whitehall seeking whom he may devour, synthesising policy into a great corporatist battle-plan.

On the other hand, there are those who believe that Mr Heseltine effectively bot- tled out of his last chance to become prime minister last week, and has been finessed by Mr Major into a pompous non-job whose robes will look more mangy and moth-eaten by the day.

Nothing could provide a more perfect test of this controversy, and of the resolve of the new deputy prime minister and first sec- retary of state, than the decision the Govern- ment is about to take about helicopters.

Even as this magazine hits the streets, the Overseas Policy and Defence Commit- tee may be meeting (chaired, like all the crucial committees, by John Major, rather than his deputy) to prepare the Cabinet discussion. The Prime Minister, the Chan- cellor, Mr Heseltine, Mr Rifkind, Mr Lang and others will reveal how, if at all, they have been influenced by the £75 million helicopter advertising campaign that has so splendidly decorated and subsidised these pages. After months of suspense, ministers must decide whether to spend £3.5 billion on the chopper the military wants, or on the one that will give Britain a strategic presence in the European helicopter indus- try. One could scarcely conceive of a moment more full of resonance for Mr Michael Heseltine.

It is in many ways an exact re-run of that pivotal argument in modern Tory politics, almost ten years ago, which became the Westland crisis: the row that formed the background to Mr Heseltine's toppling of Lady Thatcher, which in turn intensified the split over Europe, and, indeed, led to the leadership battle of last week. The issue over which Mr Heseltine left the Cabinet in 1986 was whether the future of Westland was best assured as a screwdriver plant for Sikorsky, the giant American concern, or whether the struggling Yeovil firm would be better off as part of a European group- ing. And that, astoundingly, is the question again today, though Westland is now in the hands of the British engineering group GICN.

If the government contract for 91 new attack helicopters goes to the American McDonnell-Douglas Apache, the Ministry of Defence, represented by Mr Portillo, will have won. The top brass have a high regard for the Apache, a heavyweight machine with a formidable range which proved a terrific scourge of Iraqi tanks and com- mand posts during the Gulf war. But West- land, which would build the Apaches, would be confirmed as little more than an assembly line for American kit.

If, on the other hand, the contract were to go to the Eurocopter Tiger, Westland would not merely receive the order to build the machines. The company would also become a partner in a European consor- tium that included France's Aerospatiale and Germany 's Dasa, and in which British Aerospace has a 20 per cent share. The company would have the potential to devel- op models to compete with Americans on world markets, in a way the Americans would never allow if they controlled West- land themselves.

For months it has been assumed that Mr Heseltine would deploy all his influence and experience of Whitehall to secure victory for the Eurocopter Tiger. The machine, though so far only existing in prototype, has Heseltine written all over its fuselage.

That option means giving Britain a role in shaping a joint European project to rival the Americans. It means industrial strategy. It means making sense of the £210 million of taxpayers' money BAe has already spent developing the Trigat anti-tank missile to be fixed to the Tiger.

The choice would harmonise perfectly with the growing clamour for a European armaments agency, and joint EU defence procurement. In respect of the most impor- tant battlefield weapon of the future, the `Haven't I seen you in a tapestry?' tank-busting attack helicopter, Britain, Germany and France would have the same equipment, making a fleet of 510 Euro- copter Tigers all told. This would provide the vaunted 'inter-operability' for the nascent European defence pact, in which Britain is allegedly so keen to play a part.

To pick the Eurocopter would show 'Euro- pean solidarity', M. Jacques Chirac, the French President, has recently told John Major. Not to select it, he has warned rather rudely, would risk cutting Britain off from other juicy European defence collabo- rations.

It may be that upon reading all this Mr Heseltine will be stung into action. But at the time of writing all the signs are that the Cabinet is about to choose not the Euro- copter Tiger, nor the third option, the anti- quated Bell Cobra, but the American Apache.

Doubtless Mr Heseltine will be able to defend the decision, as by far the best choice for Our Boys. At the MoD the experts become quite rhapsodical in their insistence on the Apache's superior capa- bilities: its 1,550 kilometre range, its 16 Hellfire II rockets, and above all its high level of 'ballistic tolerance': which means its ability to withstand even high explosive incendiary shells, and its way of protecting the crew in a crash.

And yet one cannot help feeling that there is more to it. Given the eerie parallels with the first Westland episode, there must be a lesson in Mr Heseltine's change of behaviour: the Euro-corporatist dog that did not bark. Some would say that his curi- ous reluctance, this time, to beat his chest over the 'European' option, is a sign that he has tacked to the Right; and that may be partly true.

But my guess is that Mr Heseltine, aged 62 rather than 53, has looked at this whole business of Europhile choppers and Atlanticist choppers, and heaved a sigh, and said to himself, 'Not again.' Rather than court defeat at the hands of Mr Por- tillo and the MoD, he has decided to sit on his hands. Right-wingers who fear the Lion King is about to mount a takeover of gov- ernment should ponder his inaction —so far — in Westland Mark Two. They may feel reassured.

Boris Johnson is assistant editor of the paily Telegraph. 4