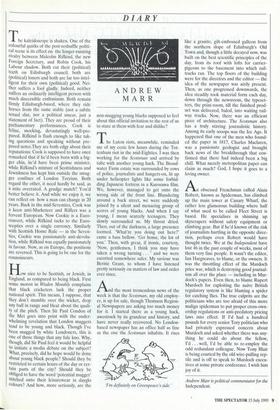 ANDREW MARR The kaleidoscope is shaken. One of the colourful quirks of the post-reshuffle politi- cal scene is its effect on the longer-running rivalry between Malcolm Rifkind, the new Foreign Secretary, and Robin Cook, his Labour shadow. Both cut their (political) teeth on Edinburgh council, both are (political) loners and both are far too intel- ligent for their own (political) good. Nei- ther suffers a fool gladly. Indeed, neither suffers an ordinarily intelligent person with much discernible enthusiasm. Both remain firmly Edinburgh-based, where they ride horses from the same stable (not a subtle sexual slur, nor a political smear, just a statement of fact). They are proud of their parliamentary performances. Cook is feline, mocking, devastatingly well-pre- pared. Rifkind is flash enough to like tak- ing questions and speaking without pre- pared notes.They are both edgy about their reputations: Cook is supposed to have once remarked that if he'd been born with a big- ger chin, he'd have been prime minister, while Riflcind's mixture of Scottishness and Jewishness has kept him outside the smug- ger confines of London Toryism. Both regard the other, it need hardly be said, as a mite overrated. A grudge match? You'd better believe it. And while we enjoy it, we can reflect on how a man can change in 20 years. Back in the mid-Seventies, Cook was a keen anti-Marketeer and Riffers was a fervent European. Now Cookie is a Euro- convert, while Rifkind tacks to the Euro- sceptics over a single currency. Similarly with Scottish Home Rule — in the Seven- ties, Cookie was passionately anti-devolu- tion, while Rifkind was equally passionately in favour. Now, as on Europe, the positions are reversed. This is going to be one for the connoisseurs.

How nice to be Scottish, or Jewish, in England, as compared to being black. First some moron in Wisden Monthly complains that black cricketers lack the proper national spirit. This means, I suppose, that they don't stumble over the wicket, drop any ball in range and bleat about the quali- ty of the pitch. Then Sir Paul Condon of the Met goes into print with the under- whelming revelation that London muggers tend to be young and black. Though I've been mugged by white Londoners, this is one of those things that any fule kno. Why, though, did Sir Paul feel it would be helpful to initiate a media debate on the subject? What, precisely, did he hope would be done about young black people? Should they be restricted to certain hours of the day or cer- tain parts of the city? Should they be Obliged to have the word 'potential mugger' stitched onto their leisurewear in dayglo colours? And how, more seriously, are the non-mugging young blacks supposed to feel about this official invitation to the rest of us to stare at them with fear and dislike?

The Luton riots, meanwhile, reminded me of my eerie few hours during the Tot- tenham riot in the mid-Eighties. I was then working for the Scotsman and arrived by tube with another young hack. The Broad- water Farm estate was surrounded by rows of police, journalists and hangers-on, lit up under helicopter lights like some forbid- ding Japanese fortress in a Kurosawa film. We, however, managed to get onto the wrong side of the front line. Blundering around a back street, we were suddenly joined by a silent and menacing group of scores of young blacks. And when I say young, I mean scarcely teenagers. They slowly surrounded us. My throat dried. Then, out of the darkness, a large presence loomed. 'What're you doing out here?' came a bass bellow. 'Get home, the lot of you.' Then, with great, if ironic, courtesy, 'Now, gentlemen, I think you may have taken a wrong turning . . . ' and we were escorted somewhere safer. My saviour was Bernie Grant, to whom I have listened pretty seriously on matters of law and order ever since.

Ald the most tremendous news of the week is that the Scotsman, my old employ- er, is up for sale, though Thomson Region- al Newspapers are asking too much money for it. I started there as a young hack, awestruck by its grandeur and history, and have never really recovered. No London- based newspaper has an office half as fine as the one the Scotsman inhabits. It rises 'I'm definitely on Greenpeace's side.' like a granite, gilt-embossed galleon from the northern slope of Edinburgh's Old Town and, though a little decayed now, was built on the best scientific principles of the day, from its roof with lofts for carrier- pigeons to the basement into which rail- tracks ran. The top floors of the building were for the directors and the editor — the idea of the newspaper was airily present. Then, as one progressed downwards, the idea steadily took material form each day, down through the newsroom, the typeset- ters, the print-room, till the finished prod- uct was delivered, baled, into waiting rail- way trucks. Now, there was an efficient piece of architecture. The Scotsman also has a truly stirring journalistic history. Among its early scoops was the Ice Age. It happened that one of the men who found- ed the paper in 1817, Charles Maclaren, was a passionate geologist and brought back news of the breakthrough that con- firmed that there had indeed been a big chill. What merely metropolitan paper can claim as much? God, I hope it goes to a loving owner.

Ai obsessed Frenchman called Alain Robert, known as Spiderman, has climbed up the main tower at Canary Wharf, the rather less glamorous building where half of what used to be called Fleet Street is based. He specialises in shinning up skyscrapers without safety equipment or climbing gear. But if he'd known of the risk of journalists hurtling in the opposite direc- tion, perhaps even Robert would have thought twice. We at the Independent have lost 46 in the past couple of weeks, most of them very fine people. It wasn't the editor, Ian Hargreaves, to blame, or the owners. It was the throttling effect of the Murdoch price war, which is destroying good journal- ism all over the place — including in Mur- doch's papers. Even then, to blame Rupert Murdoch for exploiting the naive British regulatory system is like blaming a spider for catching flies. The true culprits are the politicians who are too afraid of this more malign spiderman to put proper cross-own- ership regulations or anti-predatory pricing laws into effect. If I'd had a hundred pounds for every senior Tory politician who had privately expressed concern about Murdoch and asked whether there was any- thing he could do about the fellow, I'd . . . well, I'd be able to re-employ the odd redundant colleague. Now Tony Blair is being courted by the old wire-pulling rep- tile and is off to speak to Murdoch execu- tives at some private conference. I wish him joy of it.

Andrew Mar is political commentator for the Independent.