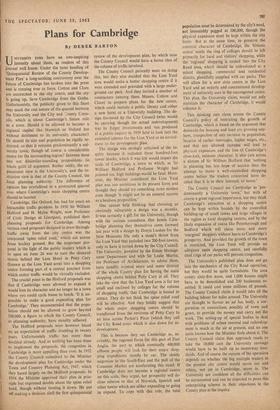 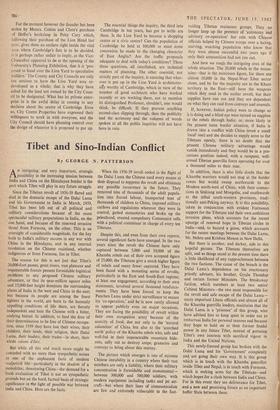 By DEREK BARTON NIVERSITY rows have an awe-inspiring intensity about them, as readers of this journal well know. Under the tame heading of 'Quinquennial Review of the County Develop- ment Plan' a long-seething controversy over the future of Cambridge has broken into the press and is running true to form. Cotton and Clore are entrenched in the city centre, and the cry is going up, Save Cambridge from the Goths. Unfortunately, the publicity given to this facet may mask the real nature of the quarrel between the University and the City and Thunty Coun- cils, which is about Cambridge's future role as a town. Should it be allowed to become a regional capital like Norwich or Oxford but without detriment to its university character? Or should its size and population be rigidly re- stricted, so that it remains predominantly a uni- versity town, though of course a considerable centre for the surrounding region? Between these two not dissimilar-sounding propositions lie Whole gulfs of argument. Rather oddly, the ex- pansionist view is the University's, and the re- strictive view is that of the County Council, the local planning authority. The difference of opinion has crystallised in a protracted quarrel over where Cambridge's main shopping centre should be located.

Cambridge, like Oxford, has had for years an intractable traffic problems In 1950 Sir• William Holford and H. Myles Wright, now Professor of Civic Design at Liverpool, published their Planning proposals for Cambridge. Among various road proposals designed to draw through- traffic away from the city centre was the celebrated 'spine relief road,' which cut across Jesus hockey ground. But the important pro- posal in-the light of the public inquiry which is to open on June 26 was to turn the decayed streets behind the Lion Hotel in Petty Cury (known as the Lion Yard area) into a shopping centre forming part of a central precinct from which motor traffic would be virtually excluded.

The crucial point in the Holford proposals was that if Cambridge were allowed to expand it would lose its character and no longer be a town where you could cycle home to lunch. 'It is im- possible to make a good expanding plan for Cambridge.' They recommended that the popu- lation should not be allowed to grow beyond 100,000, a figure to which the County Council, as planning authority, have steadily adhered.

The Holford proposals were however based on an expectation of traffic doubling in twenty years. Unfortunately traffic has more than doubled already. And as nothing has been done to implement the proposals, the congestion in Cambridge is more appalling than ever. In 1952 the County Council submitted to the Minister the development plan for Cantbridge under the Town and Country Planning Act, 1947, which they based largely on the Holford proposals. In 1954 the Minister approved their plan in prin- ciple but expressed doubts about the spine relief road, though without turning it down. He put off making a decision until the first quinquennial review of the development plan, by which time the County Council would have a better idea of the volume of traffic involved.

The County Council patiently went on doing this, but they also decided that the Lion Yard area would make a better shopping centre if it were extended and provided with a large under- ground car park. And they invited a number of contractors (among them. Messrs. Cotton and Clore) to prepare plans for the new centre, which could include a public library and either a new hotel or a University building. The de- sign favoured by the City Council (who would be carrying though the actual redevelopment) was by Edger Investments and -vas produced at a public inquiry in 1959 held to look into the extended scheme for the Lion Yard as an amend- ment to the development plan.

The design was strongly criticised at the in- quiry because it included three hundred-foot tower blocks, which it was felt would impair the scale of Cambridge, a town to which, as Sir William Holford and Professor Wright had pointed out, high buildings would be fatal. More- over, the Minister considered the Lion Yard plan was too ambitious in its present form and thought they should try something more modest even though 'it might not be an assured success as a business proposition.'

One cannot help thinking that choosing so obviously vulnerable a design was a mistake. It was certainly a gift for the University, though with the curious cussedness that besets Cam- bridge planning they themselves came forward last year with a design by Denys Lasdun for the New Museums Site only a stone's throw from the Lion Yard that included two 200-foot towers, only to have it turned down by the City Council. The University, powered by the Estate Manage- ment Department and with Sir Leslie Martin, the Professor of Architecture, to advise them, haVe steadily evinced more and more distrust of the whole County plan for having the main shopping centre behind Petty Cury at all. They take the view that the Lion Yard area is far too small and enclosed by colleges for the volume of shopping traffic that Cambridge is bound to attract. They do not think the spine relief road will be effective. And they boldly suggest that the whole major shopping centre should be transferred from the environs of Petty Cury to an area across Parker's Piece (which they call the City Road area) which is also down for re- development.

This is because they sec Cambridge as, in- evitably, the regional focus for this part of East Anglia, the part to which eventually 400,000 affluent people will look for their major shop- ping expeditions, mostly by car. The steady migration to the South-East and the pull of the Common Market are accelerating this trend. If Cambridge does not become a regional centre on this scale, they argue, her prosperity will de- cline relative to that of Norwich, Ipswich and other towns which are either expanding or going to expand. To cope with this role, the total population must be determined by the city's need, not immutably pegged at 100,000, though the physical expansion must be kept within the city limits But at the same time, to preserve the essential character of Cambridge, the 'historic centre' inside the ring of colleges should be left primarily for local and visitors' shopping, while the 'regional' shopping is routed into the City Road area, which should be redeveloped as a mixed shopping, commercial and residential district, plentifully supplied with car parks. This will allow for a new civic centre in the Lion Yard and an orderly and concentrated develop- ment of university uses in the uncongested centre. This plan, the University claim, would not only maintain the character of Cambridge, it would enhance it.

This thinking cuts clean across the County Council's policy of restricting the growth of Cambridge, which is based on the argument that demands. for housing and land are growing any- how, irrespective of any increase in population, because of earlier marriages, higher wages, etc., and that any allowed increase will lead to physical expansion and the loss of Cambridge's close-knit, intimate character. It also cuts across a dictum of Sir William 'Holford that 'nothing in planning has less hope of success than the attempt to move a well-established shopping centre before the traders concerned have de- cided that it is in their interests to move.'

The County Council see Cambridge as 'pre- dominantly a University town,' but with of course a great regional importance, but they think Cambridge's attraction as a shopping centre can be kept within bounds by the controlled building-up of small towns and large villages in the region as local shopping centres, and by the likely expansion of towns like Peterborough and Bedford which will claim more and more 'marginal' shoppers without harm to Cambridge's prosperity. And provided the growth of the town is restricted, the Lion Yard will provide an adequate main shopping centre, and carefully sited rings of car parks will prevent congestion.

The University's published plan does not go into the mechanics of the City Road operation, but they would be quite formidable. The area covers sixty-five acres, and 1,000 houses might have to be demolished and 200 businesses re- settled. It could cost some millions of pounds. The County Council claim it would take all the building labour for miles around. The University are thought to favour an ad hoc body, a cor- poration or consortium, possibly of town and gown, to provide the money and carry out the work. The setting-up of special bodies to deal with problems of urban renewal and redevelop- ment is much in the air at present, and no one quite knows how the Minister feels about it. The County Council claim that approach roads to take the 10,000 cars the University envisage Would have to be built up to motorway stan- dards. And of course the success of the operation depends on whether the big multiple traders in the present city centre would move out and others, not yet in Cambridge, move in. The University are confident all the difficulties can be surmounted and can be expected to press this enterprising scheme in their objections to the County plan at the inquiry. For the moment however the thunder has been stolen by Messrs. Cotton and Clore's purchase of Heifer's bookshop in Petty Cury which, following their purchase of the Lion Hotel last year, gives them an enclave right inside the vital area where Cambridge's fate is to be decided. It is perhaps rather unfair to imply, as the Vice- Chancellor appeared to do at the opening of the University's Planning Exhibition, that it is 'pro- posed to hand over the Lion Yard to speculative builders.' The County and City Councils are only too anxious to have the Lion Yard area re- developed as a whole; that is why they have asked for the land not owned by the City Coun- cil to be designated. What has let private enter- prise in is the awful delay in coming to any decision about the centre of Cambridge. Even so, City Centre Properties have expressed their willingness to work in with everyone, and the City Council should have planning control over the design of whatever it is proposed to put up. The essential things the inquiry, the third into Cambridge in ten years, has got to settle are these. Is the Lion Yard to become a shopping centre or a civic centre? Can the population of Cambridge be held at 100,000 or must some concession be made to the changing character of East Anglia? Are the traffic proposals adequate to deal with today's conditions? These three questions, all interlinked, are technical matters of planning. The other essential, not strictly part of the inquiry, is ensuring that what- ever is put up in the Lion Yard is architectur- ally worthy of Cambridge, which in view of the number of good architects who have worked recently or are working there, not to mention its distinguished Professor, shouldn't, one would think, be difficult. If they prevent anything second-class slipping through, then the publicity and the acrimony and the volumes of words spoken at all the public inquiries will not have been in vain.