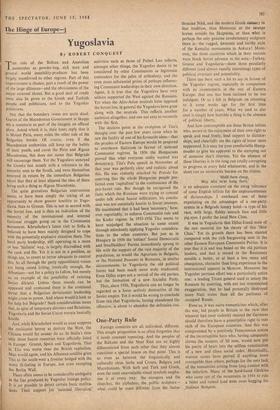 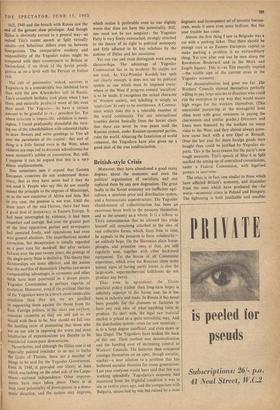 Foreign countries are all individual, different. This simple proposition is so often forgotten that it needs constant repeating. And the peoples of the Balkans and the Near East are so highly differentiated from each other that they almost constitute a special lesson on that point. This is so even as between the linguistically and culturally close Serbs and Croats, Bulgars and Macedonians. With Serb and Turk and Greek, even the most unavoidable visual symbols empha- sise it at every step : the mosques and the churches, the alphabets, the public sculpture— what could be more different from the Santo- thracian Nike, and the modern Greek statuary in that tradition, than Mestrovic or the strange horses outside the Skupstina, or than what is perhaps the only genuine revolutionary sculpture there is—the rugged, daemonic and earthy style of the Kemalist monuments in Ankara? More- over, the three countries which in their various ways block Soviet advance in the area—Turkey, Greece and Yugoslavia—show three peculiarly different (and almost equally interesting) types of political structure and potentiality.

There bas been such a lot to say in favour of the Yugoslav regime, especially in comparison with its counterparts in the rest of Eastern Europe, that one has been inclined to be too indulgent. Or so 1 felt in Belgrade on returning to it some weeks ago for the first time for a number of years. What we tend to slur over is simply how horrible a thing is the absence of political liberty.

And how contemptible are those British leftists who, secure in the enjoyment of their own right to speak and read freely, lend support to dictator- ships, and cheerfully see the rights of lesser races suppressed. It is easy for your comfortable Hamp- steader to give his approval to the stamping out of someone else's' liberties. Yet the absence of these liberties is in the long run totally corrupting to progress in every field whatsoever, and in the short run an intolerable burden on the citizen.

May who ne'er hung there,'

is an adequate comment on the smug tolerance of some English leftists for the unpleasantnesses of dictatorships. 1 overheard one of these expatiating on the advantages of a one-party system in a Belgrade luxury hotel—a type of his race, with large, flabby eunuch face and little pig eyes. I prefer the local New Class.

It was in Yugoslavia that Djilas found most of the raw material for his theory of this 'New Class.' Yet its growth there has been stunted compared with the rich burgeoning seen in the other Eastern European Communist Parties. It is true that it is and was based on the old partisan leaders, and that a record in the Resistance moulds a better, or at least a less mean and obsequious, character than long experience in the international apparat in Moscow. Moreover the Yugoslav partisan effort was a particularly active one: a leading Titoist general used to annoy the Russians by asserting, with not too overstrained exaggeration, that he had personally destroyed more Nazi trains than all the partisans of occupied Russia.

Even so, it was naïve romanticism which, after the war, led people in Britain to the view that whoever had most violently resisted the Germans should therefore have a prescriptive right to rule each of the European countries. And this, was compounded by a positively Tennysonian notion of the incorruptible hero who, having adequately cloven the casques of SS men, would now put his purity of heart into the selfless construction of a new and clean social order. Historically, warrior castes have proved if anything more corruptible than others, perhaps for the very lack of the immunities arising from long contact with the infection. Many of the hard-faced Gletkins who came out of the mountains in 1944 to rule a bitter and ruined land were soon hogging the Stalinist fleshpots. Still, 1948 and the breach with Russia saw the end of the grosser class privileges. And though Djilas is obviously correct in a general way—as indeed Tito's recent speech at Split virtually admits—yet behaviour differs even as between bourgeoisies. The comparative modesty and responsibility of the Yugoslav rulers might be compared with their counterparts in Britain or Switzerland, if we think of the Soviet privili- gentsia as on a level with the Persian or Italian rich.

The cult of personality, indeed, survives in Yugoslavia in a considerably less inhibited form than with the new Khrushchev cult in' Russia. Tito's seventieth birthday took place when I was there, and naturally produced more of this even than usual. The Yugosia v do have a certain amount to be grateful to itt.:.r president for. Yet where criticism is imposiible, adulation is mean- ingless. 1 found profoundly distasteful the turn- ing out of the schoolchildren with coloured chalks to draw flowers and write greetings to Tito all over the pavements of the capital: this sort of thing is a little forced even in the West, when children are requ red to decorate schoolrooms for some monarch's jubilee or coronation. But, still, I suppose it can be argued that this is a very minor unpleasantness.

One sometimes sees it argued that Eastern European countries do not understand demo- cracy, that as they have never had it they do not need it. People who say this do not usually extend the principle to the negroes of Mississippi, or to the new countries of Africa and Asia. But in any case, the premise is not true. Until the tense years of the mid-Thirties, there had been a good deal of democracy in Eastern Europe. It had been interrupted by violence, it had been imperfect and corrupt. But over the greater part of the time opposition parties and newspapers had operated freely, and oppositions had even won general elections. The imperfections needed correction, but decapitation is usually regarded as a poor cure for dandruff. But after various failures over the past twenty years, the prestige of the single-party State is declining. The theory that dictatorships are more efficient, and the notion that the sacrifice of democratic liberties can secure Compensating advantages in economic and other fields have been punctured in a dozen places. Yugoslav Communism is perhaps capable of evolution. Moreover, even if the political liberties of the Yugoslays were in a much more intolerable condition than they are, we are justified in supporting them against the threat from the East. Foreign politics, in the short run anyhow, concerns countries as they are and not as we would wish them to be. Nor should we fall into the footling error of pretending that those who are on our side in opposing the worst and most totalitarian of expansionisms are thereby to be considered simon-pure democracies.

Nevertheless, and although the Djilas case is an especially pointed reminder to us not to burke the faults of Titoism, there are a number of things to be said for the Yugoslav Government. Even in 1948, it provided one liberty at least which was lacking on the other side of the Carpa- thians—national independence. Other improve- ments have since taken place. There is at least some potentiality of development in a demo- cratic direction, and the system may improve, which makes it preferable even to one slightly worse that does not have this potentiality. Still, one must not be too sanguine: the Yugoslav Party is very firmly entrenched, strongly attached to the theory of its right to political monopoly and little affected in its key echelons by the notions of Djilas and his associates.

Yet one can and must distinguish even among dictatorships. The advantage of Yugoslav Communism lies in its modesty. Its claims are not total. As Vice-Premier Kardelj has spelt out clearly enough, it does not see its political system as one which must be imposed every- where in the West if progress toward 'socialism' is to be made. It recognises the mixed character of Western society, not labelling it simply as 'capitalism' fit only to be overthrown. A Commu- nism which does this is a tolerable member of the world community. For our international troubles derive basically from the Soviet claim that there can never be true peace until the Russian system, under Russian-sponsored parties, rules the world. Abjuring the fanaticism of world conquest, the Yugoslays have also given up a good deal of the true totalitarianism.