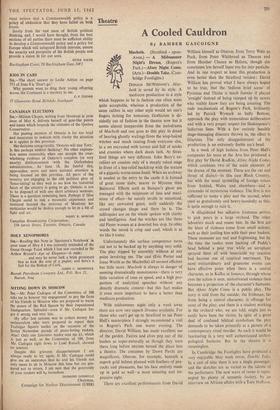 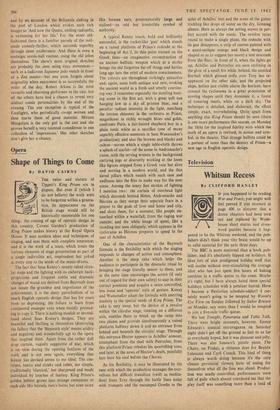 By BAMBER GASCOIGNE Macbeth. (Stratford - upon- Avon.) — A Midsummer Night's Dream. (Regent's Park.)—Afore Night Come. (Arts.)--Double Take. (Cam- bridge Footlights.) DONALD MCWHINNIE'S Mac- beth is saved by its style. A mediocre production in a style which happens to be in fashion can often seem quite acceptable, wheitas a production of the same calibre in any other style would set one's fingers itching for tomatoes. Gothicism is de- cidedly out of fashion in the theatre now but it seems almost inseparable from the melodrama of Macbeth and one goes to this play in dread of hearing ghostly wailings from the wisp-haired witches and much ranting from everyone else, in a set encrusted with turrets and full of nooks and crannies where dark deeds lurk. At Strat- ford things are very different. John Bury's ex- cellent set consists only of a steeply raked stage in front of a bas-relief backdrop with the texture of a gigantic worm-eaten fossil. When an archway is needed as the entry to the castle it is formed of great stone slabs, nearer to Mycente than Balmoral. Effects such as Banquo's ghost are managed with the minimum of fuss and maxi- mum of effect—he merely strolls in unnoticed, like any unwanted guest, until suddenly the crowd changes shape and there he is. The soliloquies are on the whole spoken with clarity and intelligence. And the witches are like three old Pinter women at a deserted bus stop. In other words the mood is crisp and cool, which is as we like it today.

Unfortunately this surface competence turns out not to be backed up by anything very solid. The play slipped by smoothly without at any point involving me. The cast (Eric Porter and Irene Worth as the Macbeths) all seemed efficient but little more. Macbeth is always in danger of seeming dramatically monotonous—there is very little variation of tone or speed, and a high pro- portion of analytical speeches without any directly dramatic context—but this fact makes it even more important to have a better than mediocre prod uction.

With midsummer night only a week away there are now two superb Dreams available. For those who can't get up to Stratford to see Peter Hall's masterpiece I strongly recommend a visit to Regent's Park one warm evening. The director, David William, has made excellent use of the garden. Fairies and elves pop out of the bushes as super-naturally as though they were there long before anyone turned the place into a theatre. The costumes by Dawn Pavitt are magnificent. Oberon, for example, beneath a superb gold helmet plumed with feathers of pea- cocks and pheasants, has his face entirely made up in gold as well—a most amazing and im- pressive sight.

There are excellent performances from David William himself as Oberon, from Terry Wale as Puck, from Peter Whitbread as Theseus and from Heather Chasen as Helena, though she sometimes lets herself lapse too far into pastiche. And in one respect at least this production is even better than the Stratford version : David William has proved what I have always hoped to be true, that the 'tedious brief scene' of Pyramus and Thisbe is much funnier if played 'straight' instead of being camped up by actors who visibly know they are being amusing. The rude mechanicals of Regent's Park, brilliantly led by Patrick Wymark as bully Bottom, approach the play with tremendous deliberation and with a very proper respect for Shakespeare's ludicrous lines. With a few entirely feasible stage-managing disasters thrown in, the effect is hilarious. The only disappointment of the production is an extremely feeble ass's head.'

In a week of high fashion from Peter Hall's companies his team at the Arts has produced a first play by' David Rudkin, Afore Night Come, which combines two of the main elements of the drama of the moment. These are the cut and thrust of dialect—in this case Black Country, but-with the usual sprinkling of foreign voices from Ireland, Wales and _ elsewhere—and a crescendo of mysterious violence. The first is not sufficient to make a play and the second, when used as gratuitously and heavy-handedly as this, is quite enough to ruin it.

A dilapidated but talkative Irishman arrives to pick pears in a large orchard. The other labourers mock and resent him. In the first act the hints of violence come from small actions, such as their jostling him with their pear baskets. These moments are real and frightening, but by the time the rustics were hacking off Paddy's head behind a pear tree while an aeroplane sprayed them all with insecticide my reaction had become one of sceptical merriment. The most extraordinary and gruesome events can have effective point when there is a central character, as in Kafka or Ionesco, through whose eyes the action is seen; unmotivated violence then becomes a projection of the character's fantasies. But Afore Night Come is a public play. The story is told from the outside; the Irishman, far from being a central character, is offstage for most of the ,play; and there is a student working in the orchard who, we are told, might just as easily have been the victim. In spite of a great deal of confused biblical symbolism the play demands to be taken primarily as a picture of a contemporary ritual murder. As such it would be fascinating in a very well authenticated anthro- pological footnote. But in the theatre. it is meaningless.

In Cambridge the Footlights have produced a very enjoyable May week revue, Doable Take. In a cast of nine there is not a single passenger, and the sketches are as varied as the talents of the performers. The new wave of revue is repre- sented by- plenty of semantic foolery, by an interview on African affairs with a Tory bluffoon, and by an account of the Britannia sinking in the port of London which evokes such rich images as `And now the Queen, smiling radiantly, is swimming for her life.' For the more old- fashioned there is a familiar parody of the well- made comedy-thriller, which succeeds superbly through sheer exuberance. And there is even a nostalgic music-hall routine, using the old jokes themselves. The show's most original sketches are probably the ones using zany movement— such as a ludicrous Japanese judo match in front of a Zen master—but one soon forgets about originality when enjoyment is so successfully the order of the day. Robert Atkins is the most versatile and charming performer in the cast, but all the others have had a chance to reveal very distinct comic personalities by the end of the evening. The one exception is typical of the Footlights, who periodically co-opt women and then starve them of good material. Miriam Margolyes is the only girl in the cast and she proves herself a very talented comedienne in one collection of 'impressions.' Her other sketches don't give her a chance.