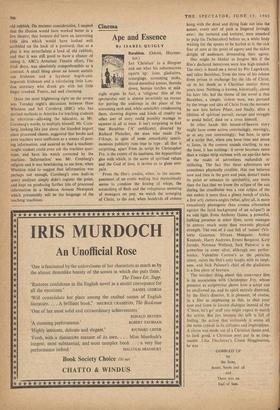 SAY `Christian' to a filmgoer and see what his subconscious squirts up: lions, gladiators, scourgings, screaming mobs, blood-drenched arenas, thumbs down, human torches at mid- night orgies. In fact, a 'religious' film of the spectacular sort is almost invariably an excuse for putting the audience in the place of the screaming mob and, while ostensibly condemning them, showing degrees and kinds of cruelty no other sort of story could possibly manage to squeeze in all at once. It isn't surprising to find that Barabbas (`A' certificate), directed by Richard Fleischer, the man who made The Vikings, in spite of some remarkably sancti- monious publicity runs true to type: all that is surprising, apart from its script by Christopher Fry, is the extent of its nastiness, the hypocritical glee with which, in the name of spiritual values and the God of love, it invites us to gloat over pain.

From the film's credits, when, to the accom- paniment of an erotic wailing that mysteriously seems to combine the hissing of whips, the scrunching of flesh and the voluptuous moaning of teenagers on pop, we watch the scourging of Christ, to the end, when hundreds of crosses hung with the dead and dying fade out into the sunset, every sort of pain is lingered lovingly over: the tortured and torturer: men smashed to pulp (in Technicolor) before us, a white body waiting for the spears to be hurled at it, the sick fear of men at the point of agony and the sicker delight of audiences demanding their agony.

One might be likelier to forgive this if the film's declared intentions were less high-minded. The story is based on a novel by Par Lagerkvist, and takes Barabbas. from the time of his release from prison in exchange for the life of Christ, up to his death as a Christian martyr thirty years later. Nothing is known, historically, about his later life, but the theme of the novel is that Barabbas, a simple, violent man, was pursued by the image and idea of Christ from the moment he saw him before Pilate, and finally, after a lifetime of spiritual pursuit, escape and struggle to avoid belief, died on a cross himself.

In other hands this hound-of-heaven story might have come across convincingly, movingly, or at any rate interestingly: but here, in spite of a script that, when you have time and peace to listen, in the context sounds startling, to say the least, it has nothing: it never becomes more than a vulgar strip cartoon with an ape-like hero in the midst of adventures outlandish or titillating. The fact that these adventures are sometimes physically credible, that one believes now and then in the gore and pain, doesn't make its point or enhance its spirituality, any more than the fact that we know the eclipse of the sun during the crucifixion was a real eclipse of the sun makes it more than a glossy bunch of tricks, a few arty camera-angles (what, after all, is more evocatively photogenic than crosses silhouetted against the lurid background of an eclipse?) in an odd light. Even Anthony Quinn, a powerful, hulking presence in other films, never manages to convey much more than moronic physical strength. The rest of a cast full of `names' (Vit- torio Gassman, Silvana Mangano, Arthur Kennedy, Harry Andrews, Ernest Borgnine, Katy Jurado, Norman Wolland, Jack Palance) is as powerless to come alive, although one perfor- mance, Valentina Cortese's as the patrician ninny, raises the film's only laughs with its inept- ness, and Jack Palance's chief of the gladiators is a fine piece of bravura.

The weirdest thing about this unsavoury film is its association with Christopher Fry, whose presence as scriptwriter shows how a script can be swallowed up, and its spirit entirely distorted, by the film's director. It is pleasant, of course, in a film as unpleasing as this, to shut your eyes and listen to literate dialogue instead of the `C'mon, let's go' stuff you might expect to match j the action. But just because the talk is full of feeling, the action that surrounds it seems all the more cynical in its attitudes and implications. A circus was made out of a Christian theme and, to look good, a Christian poet put in as ring- master. Like Thackeray's. Count Hogginarmo, he was GOBBLED UP by the lions, bones, boots and all and There was an End of him.