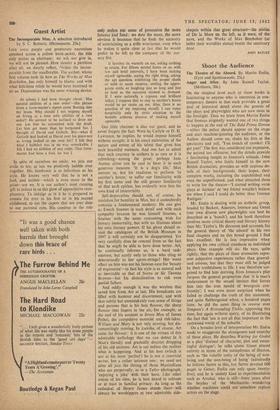 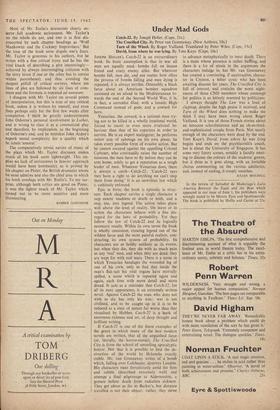 Anger and After. By John Russell Taylor. (Methuen, 30s.)

ON the simplest level each of these books is fascinating to anyone who is interested in con- temporary theatre in that each provides a great deal of historical detail about the genesis of the plays and playwrights who are now most in the limelight. Thus we learn from Martin Esslin that lonesco originally wanted one of two things to happen at the end of The Bald Prima Donna —either the police should appear on the stage and start machine-gunning the audience, or the Author should come on, shake his fists at the spectators and yell, 'You bunch of crooks! I'll get you!' The first was considered too expensive, the second too offensive; but the details provide a fascinating insight to lonesco's attitude. John Russell Taylor, who limits himself to the new British dramatists, provides us with copious de- tails of their backgrounds, their hopes, their complete works, including the unpublished and even the unperformed, and what attracted them to write for the theatre—'I started writing verse plays at thirteen' or 'my friend wouldn't believe me when I said I could do better than Terence Rattigan.'

Mr. Esslin is dealing with an aesthetic group, headed by Beckett, Adamov, lonesco and Genet (our own diverse new playwrights can best be described as a 'bunch'), and his book therefore involves more critical theory and literary history than Mr. Taylor's. He discusses and accounts for the general theory of 'the absurd' in his two final chapters and on this broad ground I find him excellent. He is less impressive when applying his own critical standards to individual plays. One example will do. He says, quite rightly, that the plays of these dramatists repre- sent subjective experiences rather than general- ised axioms, but that they must still be judged by their truthfulness to life. I was therefore sur- prised to find him deriving from lonesco's play Jacques the general proposition that 'it is man's enslavement to the sexual instinct that forces him into the iron mould of bourgeois con- formity'; I was even more surprised when he failed to challenge the truth of this statement; and quite flabbergasted when, a hundred pages later, he did the same thing in reverse over Simpson's A Resounding Tinkle, approving this time, but again without query, of its illustrating the fact that 'sex is not all that important in the restrained world of the suburbs.'

On a broader level of interpretation Mr. Esslin tends to exaggerate the strangeness and anarchy of these plays. He describes Waiting for Godot as a play 'drained of character, plot and mean- ingful dialogue'; he talks about Genet almost entirely in terms of the metaphysics of illusion, such as 'the volatile unity of the being of non- being and the non-being of being' (admittedly he follows Sartre in this, but Sartre devoted 600 pages to Genet; Esslin can only spare twenty- five); and he is unduly kind to experimentalists such as Arrabal, who is still—forty years after the heyday of the Mechanists—wondering whether machines could not somehow replace actors on the stage. Most of Mr. Esslin's dramatists clearly de- serve full academic seriousness. Mr. Taylor's on the whole do not, and one is at first dis- concerted by such chapter headings as `Wolf Mankowitz and the Cockney Improvisers.' But the tone of the book soon dispels one's fears. Mr. Taylor is generous to his authors, but he writes with a fine critical irony and he has the vital knack of describing a plot interestingly— achieved by always intermingling criticism with the story (even if one or the other has to retreat within parentheses), and thus avoiding the deepest pitfall of critical surveys, where ten lines of plot are followed by six lines of com- ment and the formula is repeated ad nauseam.

disagree with Mr. Taylor on several points of interpretation, but this is true of any critical book, unless it is written by oneself, and even then perhaps only for the first few weeks after completion. I think he greatly underestimates John Osborne's personal involvement in Luther, and is wrong to class it as a commercial play and therefore, by implication, as the beginning of Osborne's end; and he mistakes John Arden's superb moral complexity for a quality which he labels `amoral.'

The comparatively trivial nature of many of the plays which Mr. Taylor discusses makes much of his book seem lightweight. This im- plies no lack of seriousness (a heavier approach would have been bombastic), as is proVed by his chapter on Pinter, the British dramatist whom he most admires and also.the chief area in which his book overlaps with Mr. Esslin's. To my sur- prise, although both critics are good on Pinter, it was the lighter touch of Mr. Taylor which turned out to be more sensitive and more illuminating.