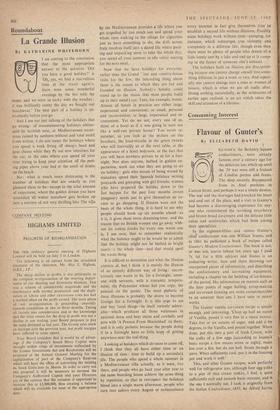 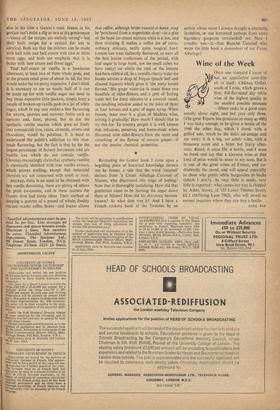 GUNTER'S, the Berkeley Square confectioners, were already famous over a century ago for the delicious ices which up until the '39 war were still a feature of 'London parties and feasts. The shop recently disappeared from its final premises in Curzon Street, and perhaps it was a timely demise. The war and the shortages had knocked the heart and soul out of the place, and a visit to Gunter's had become a discouraging experience for any- one who remembered the ravishing strawberry and brown bread ice-creams and the delicate little cakes and sandwiches which had been among their specialities.

In the eighteen-fifties and -sixties Gunter's chief confectioner was one William Jeanes, and in .1861 he published a book of recipes called Gunter's. Modern Confectioner. The book is not, or was not, scarce (about ten years ago I paid 7s. 6d. for a fifth edition) and Jeanes is an endearing writer, here and there throwing out unexpected pieces of information, and describing the confectionery and ice-making equipment, including a chapter on the building of ice-houses, of the period. His information on matters such as the finer points of sugar boiling, syrup-making and ice-cream freezing are more comprehensible to an amateur than any I have seen in newer works.

The Gunter vanilla ice-cream recipe is simple enough, and interesting. 'Chop up half an ounce of Vanilla, pound it very fine in a metal mortar. Take five or six ounces of sugar, and add it by degrees, to the Vanilla, and pound together. When done, put this into a pint of fresh. Cream, with the yolks of a few eggs [according to Jeanes's basic recipe a few means seven or eight], make hot over a fire, but do not boil. Strain through a sieve. When sufficiently cool, put it in the freezing pot and work it well.'

This, and other Gunter recipes, work perfectly' well for refrigerator ices, although four egg-yolks to a pint of thin cream makes, I find, a quite sufficiently rich and smooth basic mixture, and is the one I normally use. I took it originally from the Italian Confectioner,.1837, by Alfred Jarrin, also in his time a Gunter's man. Jeanes in his preface can't resist a dig or two at his predecessor —`many of the recipes are entirely wrong'—but their basic recipe for a custard for ices is identical. Both say that the mixture can be made with half milk and half cream with two or three extra eggs, and both are emphatic that it is better with 'new cream and fewer eggs.'

That half-ounce of vanilla is a handsome allowance, at least two or three whole pods, and at the present retail price of about 3s. 6d. for two would make the ice pretty expensive. I don't think it is necessary to use so much; half of it can be made up for with vanilla sugar (no need to buy those expensive little packets, simply keep a couple of broken-up vanilla pods in a jar of white sugar, which in any case makes a fine flavouring for sweets, pastries and summer fruits such as apricots and, later, plums), but to use the synthetic vanilla essence which goes so freely into commercial ices, cakes, custards, sweets and chocolates, would be pointless. It is hard to understand the public's addiction to this man- made flavouring, but the fact is that by far the largest percentage of factory ice-creams sold are vanilla ices which do not contain vanilla. Chemists reassuringly claim that synthetic vanillin is chemically identical with true vanilla extract, which proves nothing, except that industrial chemists arz not concerned with smell or taste.

Anyway, there is no need to be obsessed with this vanilla flavouring, there are plenty of others for plain ice-creams, and in these matters the Gunter firm had many ideas. Their method of steeping a quarter, of a pound of whole, freshly roasted mocha corfee beans—and Jeanes allows that coffee, although better roasted at home, may be 'purchased from a respectable shop'—in a pint of the basic ice-cream mixture while it is hot, and then straining it makes a coffee ice of extra- ordinary delicacy, really quite magical food. Lemon ices were indirectly flavoured, as were all the best lemon confections of the period, with loaf sugar (a large hunk, not the small cubes we have today) on which the rind of the lemons had been rubbed off. In a morello cherry water-ice Jeanes advises a drop of Noyau (peach leaf and almond liqueur) which gives it 'the nutty kernel flavour.' His grape water-ice is made from two handfuls of elder-flowers and a pint of boiling water left for forty minutes in a covered vessel, the resulting infusion added to the juke of three or four lemons and a pint of sugar syrup. When frozen, 'pour over it a glass of Madeira wine, mixing it gradually.' How much I should like to try this ice. To country people it is well known that infusions, preserves and home-made wines flavoured with elder-flowers have the scent and something of the flavour of muscat grapes—if not the precise chemical properties.

Re-reading the Gunter book I came upon a beguiling piece of historical knowledge thrown out by Jeanes, a tale that the word 'caramel' derives from 'a Count Albufage Caramel of Nismes, who discovered this stage of boiling.' Now that is thoroughly tantalising. How did that gentleman come to be burning the sugar down there at Nimes? How did his discovery become known? At what date was it? And I have a French cookery book of the Twenties by an author whose name I always thought a charming invention, or one borrowed perhaps from some legendary gorgeous tortoiseshell cat. Now I wonder, was—is—that Blanche Caramel who wrote the little book a descendant of our Count Albufage?