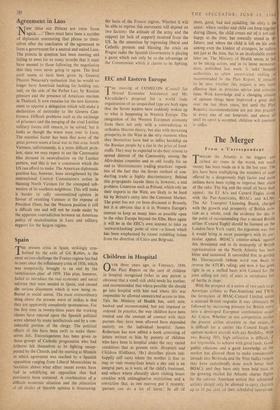 HE meeting of COMECON (Council for I Mutual Economic Assistance) and Mr. Khrushchev's proposal for a world trade organisation of an unspecified type are both signs that the Soviet leaders have suddenly woken up to what is happening in Western Europe. The integration of the Western European economy faces them not only with a contradiction to orthodox Marxist theory, but also with increasing prosperity in the West at the very moment when they themselves have had to inflict hardship on the Russian people by a rise in the price of food- stuffs. They may be expected to do their utmost to spread distrust of the Community among the Afro-Asian countries and to call loudly for an end to 'discriminatory trading practices' regard- less of the fact that the Soviet method of con- ducting trade is highly discriminatory. Behind this propaganda façade there is, however, a real problem. Countries such as Poland, which rely on their exports to the West, are likely to be hard hit by Britain's entry into the Common Market. The point has not yet been discussed at Brussels, but it is obvious that it is in Western Europe's interest to keep as many lines as possible open to the other Europe beyond the Elbe. Here again it will be in the EEC's own interest to take an 'outward-looking' point of view--a lesson which has been emphasised by recent rumbling noises from the direction of Cairo and Belgrade.