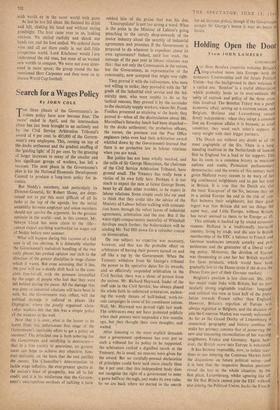 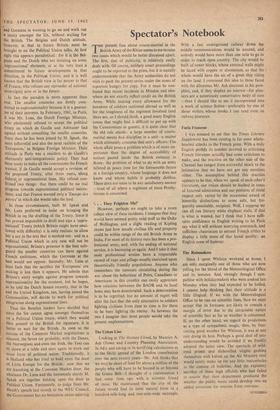 long-awaited move into Europe—both the economic Communities and the future Political Union—but the background to their welcome is a varied one. 'Benelux' is a useful abbreviation which probably leads us to over-estimate the unity of outlook and policy of the three coon' tries involVed. The Benelux Treaty was a purely economic affair, setting up a customs, union, and Belgium, Holland and Luxembourg remain firmly independent: when they adopt a common line on European affairs it is because, as small countries, they need each other's support to carry weight with their bigger partners.

The Dutch are without any doubt at all the most anglophile of the Six. There is a long- standing tradition in the Netherlands of looking first to England for a lead or for support. This has its roots in a common history as maritime nations and stable, Protestant parliamentarY democracies; and the events of this century have given Holland every reason to be wary of her big continental neighbours and to put her trust in Britain. It is true that the Dutch are also the most 'European' of the Six, because they see in a united Europe the end to the risk of con- flict between their neighbours, but their great regret was that Britain did not see things the same way, and Little Europe, without Britain, has never seemed to them to be Europe at all This attitude is backed up by sound economic reasons. Holland is a traditionally low-tarilf country, living by trade, and she sees in British membership of the EEC a balance to French and German tendencies towards autarky and pro- tectionism and the guarantee of a liberal trad- ing policy. Moreover, the division of Europe was threatening to cost her her British markets for farm products, which would have been gradually lost to the Danes (even if she drove the Danes from part of their German market).

Belgium's position is less clear-cut. She, too, has major trade links with Britain, but no par- ticularly strong anglophile tradition : language and cultural ties turn at least half of the popu- lation towards France rather than England. However, Britain's rejection of Europe was always regretted in Belgium, and the decision to join the Common Market was warmly welcomed. As far as the Grand Duchy of Luxembourg IS concerned, geography and history combine to make her primary concern that of preserving the new and reassuring reconciliation of her warring neighbours, France and Germany. Again, how- ever, the British move into Europe is welcomed.

It has become impossible, now, to isolate reac- tions to our entering the Common Market from the discussions on future political union and it is here that the respective Benelux positions reveal the key to the whole situation. In the first place, Luxembourg, whilst agreeing like all the Six that Britain cannot join the EEC without, also joining the Political Union, backs the French sight this appears paradokical: for it is the Bel- THE SPECTATOR. JUNE 15. 1962 it land Germans in wanting to go on and work out a treaty amongst the Six, without waiting for the British. The Belgian and Dutch attitude, however, is that in future Britain must be brought in on the Political Union talks. At first glans and the Dutch who are insisting on some `supranational' elements, or at the very least a commitment to future developments in that direction, in the Political Union; and it is well known that the British view is far nearer to that of France, who refuses any surrender of national sovereignty now or in the future.

In fact the paradox is more apparent than real. The smaller countries are firmly com- mitted to supranationality because it is a guaran- tee of their interests. In February, 1961, in Paris, it was Mr. Luns, the Dutch Foreign Minister, who obstinately refused to accept the political treaty on which de Gaulle and Adenauer had agreed without consulting the smaller countries. Since then he has been joined by M. Spaak, the most influential and also the most realistic of the `Europeans,' as Belgian Foreign Minister. Their attitude in Paris was a reaction to de Gaulle's obstinately anti-integrationist policy. They had been ready to make all the concessions the French wanted, if de Gaulle would accept a revision of the proposed Treaty, after three years, along federal, or supranational lines. His refusal con- firmed two things: that there could be no real progress towards supranational political institu- tions; and that France wanted only a 'Europe des patries' in which she would take the lead.

In these circumstances, both M. Spaak and Mr. Luns preferred to insist on bringing the British in on the drafting of the Treaty. Since it has proved impossible to draft and sign a 'supra- national' Treaty (which Britain might have swal- lowed with difficulty) it is only realistic to allow her a say in the text that is worked out : and in a Political Union which in any case will not be supranational, Britain's presence is the best safe- guard the smaller countries can have against French ambitions, which the Germans at the best would not oppose. Secondly, Mr. Luns at least feels that the sacrifice the 'Europeans' are making is less than it appears. He admits that Britain's entry weighs against progress towards supranationality for the moment, but he hopes, as he told the Dutch Senate recently, that in the end the United Kingdom, too, having joined the Communities, will decide to work for political integration along supranational lines.

Thus the Benelux leaders have decided that since the Six cannot agree amongst themselves on a Political Union treaty, which they would then present to the British for signature, it is better to wait for the British. As soon as the success of the Common Market negotiations is ensured, the Seven (or probably, with the Danes, the Norwegians and even the Irish, the Ten) can sit down at a table and start again to work out some form of political union. Traditionally, it is Holland who has tried to hold open the door of Little Europe for the British: now that we are knocking at the Common Market door, the obstinate Dr. Luns and the immensely sturdy M. Spaak are together holding open the door to Political Union. Fortunately, to judge from Mr. Heath's speech last month to the WEU Council, the Government has no hesitation about entering.