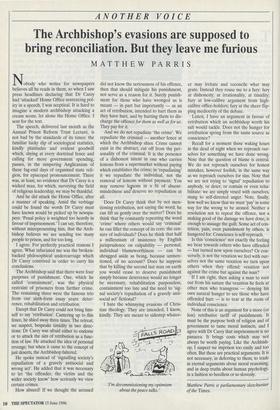 The Archbishop's evasions are supposed to bring reconciliation. But they leave me furious

Nobody who writes for newspapers believes all he reads in them, so when I saw press headlines declaring that Dr Carey had 'attacked' Home Office sentencing pol- icy in a speech, I was sceptical. It is hard to imagine a modern archbishop attacking a cream scone, let alone the Home Office. I sent for the text.

The speech, delivered last month as the Annual Prison Reform Trust Lecture, is not bad by the standards of its times: the familiar lucky dip of sociological statistics, kindly platitudes and evident goodwill which, shying at every doctrinal fence and calling for more government spending, passes, in the simpering Anglicanism of these fag-end days of organised state reli- gion, for episcopal pronouncement. There was, at least, no evidence that Dr Carey is a wicked man, for which, surveying the field of religious leadership, we may be thankful.

And he did attack the Home Office, after a manner of speaking. Amid the verbiage could be found the words Dr Carey must have known would be picked up by newspa- pers: 'Penal policy is weighted too heavily in favour of imprisonment.' I can say, therefore, without misrepresenting him, that the Arch- bishop believes we are sending too many people to prison, and for too long.

I agree. For perfectly practical reasons I agree. What infuriated me was the broken- backed philosophical undercarriage which Dr Carey contrived in order to carry his conclusions.

The Archbishop said that there were four purposes of punishment. One, which he called 'containment', was the physical restraint of prisoners from further crime. The remaining three were the famous trio from our sixth-form essay years: deter- rence, rehabilitation and retribution.

Except that Dr Carey could not bring him- self to say 'retribution'. Cantering up to this fence, he shied away three times. The retreat, we suspect, bespeaks timidity in two direc- tions: Dr Carey was afraid either to endorse or to attack the aim of retribution as a func- tion of law. He attacked the idea of personal revenge; but when it came to the concept of just deserts, the Archbishop faltered.

He spoke instead of 'signalling society's repudiation of a gravely antisocial and wrong act'. He added that it was necessary to let 'the offender, the victim and the wider society know' how seriously we view certain crimes.

How absurd! If we thought the accused did not know the seriousness of his offence, then that should mitigate his punishment, not serve as a reason for it. Surely punish- ment for those who have wronged us is meant — in part but importantly — as an act of retribution, intended to hurt them as they have hurt, and by hurting them to dis- charge the offence for them as well as for us. They pay for it.

And we do not repudiate 'the crime'. We repudiate the criminal — another fence at which the Archbishop shies. Crime cannot exist in the abstract, cut off from the per- sonality of the criminal. It is the presence of a dishonest intent in one who carries lemons from a supermarket without paying which establishes the crime; in 'repudiating' it we repudiate the individual, not the removal of lemons without payment. You may remove legions in a fit of absent- mindedness and deserve no repudiation at all.

Does Dr Carey think that by not men- tioning retribution, not saying the word, he can lift us gently over the matter? Does he think that by constantly repeating the word `crime' where others would say 'criminal' he can fillet the concept of its core: the cen- sure of individuals? Does he think that half a millennium of insistence by English jurisprudence on culpability — personal, individual blameworthiness — can be shrugged aside as being, because unmen- tioned, of no account? Does he suppose that by killing the second last man on earth you would cease to deserve punishment simply because deterrence would no longer be necessary, rehabilitation purposeless, containment too late and the need to 'sig- nal society's repudiation of a gravely anti- social act' fictional?

I hate the whinnying evasions of Chris- tian theology. They are intended, I know, kindly. They are meant to sidestep whatev- 'I'm decommissioning my optimism about the peace talks.' er may irritate and reconcile what may grate. Instead they rouse me to a fury: fury at dishonesty, at irrationality, at timidity; fury at low-calibre argument from high- calibre office-holders; fury at the sheer flip- ping mediocrity of the debate.

Listen, I have an argument in favour of retribution which an archbishop worth his salt would tackle. Does not the hunger for retribution spring from the same source as conscience?

Recall for a moment those waking hours in the dead of night when we reproach our- selves for something we have done wrong. Note that the question of blame is central. We do not reproach ourselves for honest mistakes, however foolish, in the same way as we reproach ourselves for sins. Note that we are not trying to 'signal' repudiation to anybody, or deter, or contain or even reha- bilitate: we are simply vexed with ourselves, stung to self-directed anger. Note, finally, how well we know that we must 'pay' in some way for the wrong to be atoned. Neither a resolution not to repeat the offence, nor a making good of the damage we have done, is enough to assuage the guilt. Some act of con- trition, pain, even punishment by others, is hungered for. Conscience is self-reproach.

Is this 'conscience' not exactly the feeling we bear towards others who have offended — but turned now upon ourselves? Or con- versely, is not the vexation we feel with our- selves not the same vexation we turn upon others when they offend: vexation not against the crime but against the man?

If I am right, then asking a man to root out from his nature the vexation he feels at other men who transgress — denying his own natural hunger to see those who have offended hurt — is to tear at the roots of individual conscience.

None of this is an argument for a more (or less) retributive tariff of punishments. It must be the purpose both of religion and of government to tame moral instincts, and I agree with Dr Carey that imprisonment is no panacea. It brings costs which may not always be worth paying. Like the Archbish- op, I suspect we imprison too easily and too often. But these are practical arguments. It is not necessary, in deferring to them, to trade in eternal arguments about moral reasoning, and in deep truths about human psychology, in a fashion so heedless or so slovenly.

Matthew Parris is parliamentary sketchwriter of the Times.