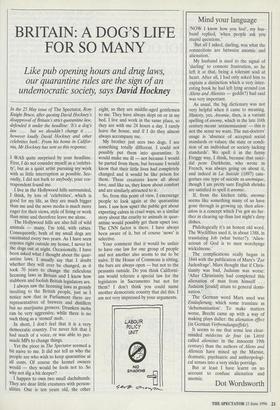 BRITAIN: A DOG'S LIFE FOR SO MANY

undemocratic society, says David Hockney In the 25 May issue of The Spectator, Rory Knight Bruce, after quoting David Hockney's disapproval of Britain's strict quarantine law, defended it under the headline: 'It's a dog's law . . . but we shouldn't change it . . . however loudly David Hockney and other celebrities bark: From his home in Califor- nia, Mr Hockney has sent us this response.

I WAS quite surprised by your headline. First, I do not consider myself as a 'celebri- ty', but as a quiet artist pursuing my work with as little interruption as possible. Sec- ondly, I did not bark to anybody; your cor- respondent found me.

I live in the Hollywood hills surrounded, I think, by lots of 'celebrities', which is good for my life, as they are much bigger than me and the news media is much more eager for their views, style of living or work than mine and therefore leave me alone.

The Hollywood hills are also full of wild animals — many, I'm told, with rabies. Consequently, both of my small dogs are vaccinated every two years. As I have seen coyotes right outside my house, I never let the dogs out at night. Occasionally, I have been asked what I thought about the quar- antine laws. I usually say that I doubt whether they will ever be changed, as it took 70 years to change the ridiculous licensing laws in Britain and I know how stubborn and foolish British legislators are. I always saw the licensing laws as grossly insulting to the British people, just as I notice now that in Parliament there are representatives of brewers and distillers but no marijuana growers. Drunken mobs can be very aggressive, while there is no such thing as a 'stoned' mob.

In short, I don't feel that it is a very democratic country. I've never felt that I had much of a voice, or was able to per- suade MPs to change things.

Yet the piece in The Spectator seemed a bit naive to me. It did not tell us who the people are who wish to keep quarantine at all costs. Of course the kennel owners would — they would be fools not to. So why not dig a bit deeper?

I happen to own two small dachshunds. They are dear little creatures with person- alities. One is ten years old, the other eight, so they are middle-aged gentlemen to me. They have always slept on or in my bed. I live and work in the same place, so they are with me 24 hours a day. I rarely leave the house, and if I do they almost always accompany me.

My brother just sees two dogs. I see something totally different. I could not possibly put them into quarantine. It would make me ill — not because I would be parted from them, but because I would know that their little lives had completely changed and it would be like prison for them. These creatures know all about love, and like us, they know about comfort and are similarly attracted to it. So, from this point of view, I encourage people to look again at the quarantine laws. I saw how upset the public got about exporting calves in cruel ways, so a similar story about the cruelty to animals in quar- antine would possibly get them upset too. The CNN factor is there. I have always been aware of it, but of course 'news' is selective.

Your comment that it would be unfair to have one law for one group of people and not another also seems to me to be naive. If the House of Commons is sitting, the bars are always open — but not to the peasants outside. Do you think Californi- ans would tolerate a special law for the legislators in Sacramento but not for them? I don't think you could name another democratic country that did this. I am not very impressed by your arguments.