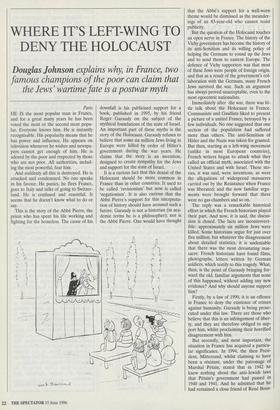 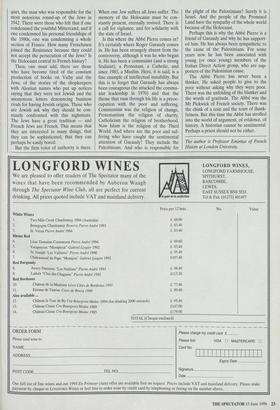 WHERE IT'S LEFT-WING TO DENY THE HOLOCAUST

Paris HE IS the most popular man in France, and for a great many years he has been voted the most or the second most popu- lar. Everyone knows him. He is instantly recognisable. His popularity means that he has power and influence. He appears on television whenever he wishes and newspa- pers cannot get enough of him. He is adored by the poor and respected by those who are not poor. All authorities, includ- ing the most powerful, fear him.

And suddenly all this is destroyed. He is attacked and condemned. No one speaks in his favour. He panics, he flees France, goes to Italy and talks of going to Switzer- land. He is confused and resentful. It seems that he doesn't know what to do or say.

This is the story of the Abbe Pierre, the priest who has spent his life working and fighting for the homeless. The cause of his downfall is his publicised support for a book, published in 1995, by his friend Roger Garaudy on the subject of the mythical foundations of the state of Israel. An important part of these myths is the story of the Holocaust. Garaudy refuses to believe that some six million Jews living in Europe were killed by order of Hitler's government during the war years. He claims that the story is an invention, designed to create sympathy for the Jews and support for the state of Israel.

It is a curious fact that this denial of the Holocaust should be more common in France than in other countries. It used to be called 'revisionism' but now is called `negationism'. It is also curious that the Abbe Pierre's support for this interpreta- tion of history should have aroused such a furore. Garaudy is not a• historian (in aca- demic terms he is a philosopher); nor is the Abbe Pierre. One would have thought that the Abbe's support for a well-worn theme would be dismissed as the meander- ings of an 83-year-old who cannot resist publicity.

But the question of the Holocaust touches an open nerve in France. The history of the Vichy government has become the history of its anti-Semitism and its willing policy of helping the Germans to round up the Jews and to send them to eastern Europe. The defence of Vichy supporters was that most of these Jews were people of foreign origin, and that as a result of the government's col- laboration with the Germans, many French Jews survived the war. Such an argument has always proved unacceptable, even to the most egocentric nationalists.

Immediately after the war, there was lit- tle talk about the Holocaust in France. Communists and Gaullists liked to present a picture of a united France, betrayed by a few individuals. No one suggested that one section of the population had suffered more than others. The anti-Semitism of Hitler and the Nazis was taken for granted. But then, starting as a left-wing movement (unlike in most European countries), French writers began to attack what they called an official myth, associated with the United States and with Israel. These sto- ries, it was said, were inventions, as were the allegations of widespread massacres carried out by the Resistance when France was liberated; and the now familiar argu- ments were brought forward that there were no gas chambers and so on.

The reply was a remarkable historical effort in which the French historians played their part. And now, it is said, the discus- sion is closed. The facts are incontrovert- ible: approximately six million Jews were killed. Some historians argue for just over five million, but whatever the disagreement about detailed statistics, it is undeniable that there was the most devastating mas- sacre. French historians have found films, photographs, letters written by German soldiers, which testify to this tragedy. What, then, is the point of Garaudy bringing for- ward the old, familiar arguments that none of this happened, without adding any new evidence? And why should anyone support him?

Firstly, by a law of 1990, it is an offence in France to deny the existence of crimes against humanity. Garaudy is being prose- cuted under this law. There are those who believe that this is an infringement of liber- ty, and they are therefore obliged to sup- port him, whilst proclaiming their horrified disagreement with him.

But secondly, and most important, the situation in France has acquired a particu- lar significance. In 1994, the then Presi- dent, Mitterrand, whilst claiming to have been a resistant, under the patronage of Marshal Main, stated that in 1942 he knew nothing about the anti-Jewish laws that Petain's government had passed in 1940 and 1941. And he admitted that he had remained a close friend of Rend Bous- quet, the man who was responsible for the most notorious round-up of the Jews in 1942. There were those who felt that if one condemned the youthful Mitterrand, and if one condemned his personal friendships of the 1980s, one was condemning a whole section of France. How many Frenchmen joined the Resistance because they could not accept the persecution of the Jews? Is the Holocaust central to French history?

Then, one must add, there are those who have become tired of the constant production of books on Vichy and the Jews, of the stories of the shopkeepers with Alsatian names who put up notices saying that they were not Jewish and the anonymous letters denouncing business rivals for having Jewish origins. Those who are Jewish ask why they should be con- stantly confronted with this nightmare. The Jews have a great tradition — and French Jews are French. This means that they are interested in many things, that they can be sophisticated, that they can perhaps be easily bored.

But the firm voice of authority is there. When one Jew suffers all Jews suffer. The memory of the Holocaust must be con- stantly present, eternally revived. There is a call for vigilance, and for solidarity with the state of Israel.

Is this where the Abbe Pierre comes in? It's certainly where Roger Garaudy comes in. He has been strangely absent from the controversy, although it was he who began it. He has been a commuhist (and a strong Stalinist), a Protestant, a Catholic, and since 1983, a Muslim. Here, it is said, is a fine example of intellectual instability. But this is to forget that Garaudy has always been courageous (he attacked the commu- nist leadership in 1970) and that the theme that runs through his life is a preoc- cupation with the poor and suffering. Communism was the religion of change, Protestantism the religion of charity, Catholicism the religion of brotherhood. Now Islam is the religion of the Third World. And where are the poor and suf- fering who have caught the sentimental attention of Garaudy? They include the Palestinians. And who is responsible for the plight of the Palestinians? Surely it is Israel. And the people of the Promised Land have the sympathy of the whole world because of the Holocaust.

Perhaps this is why the Abbd Pierre is a friend of Garaudy and why he has support- ed him. He has always been sympathetic to the cause of the Palestinians. For some years now he has been associated with young (or once young) members of the Italian Direct Action group, who are sup- porters of the Palestinian cause.

The Abbe Pierre has never been a thinker. He asked people to give to the poor without asking why they were poor. There was the unfolding of the blanket and the words of gratitude. The Abbe was the Mr Pickwick of French society. There was the chink of a coin and the tears of thank- fulness. But this time the Abbe has strolled into the world of argument, of evidence, of history. A historian cannot be sentimental. Perhaps a priest should not be either.

The author is Professor Emiritus of French History at London University.