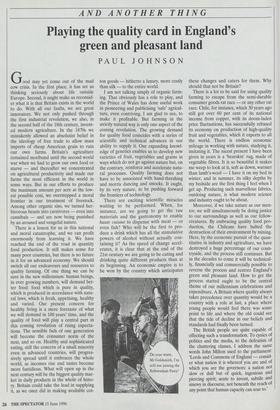 Playing the quality card in England's green and pleasant land

Good may yet come out of the mad cow crisis. In the first place, it has set us thinking seriously about life outside Europe. Second, it might make us reconsid- er what it is that Britain exists in the world to do. With all our faults, we are great innovators. We not only pushed through the first industrial revolution, we also, in the second half of the 18th century, invent- ed modern agriculture. In the 1870s we mistakenly allowed an absolutist belief in the ideology of free trade to allow mass imports of cheap American grain to ruin our own farms. Britain's agriculture remained moribund until the second world war when we had to grow our own food or starve — and thereafter we concentrated on agricultural productivity and made our farms the most efficient in the world in some ways. But in our efforts to produce the maximum amount per acre at the low- est possible cost, we overstepped a moral frontier in our treatment of livestock. Among other organic sins, we turned her- bivorous beasts into carnivores — even into cannibals — and are now being punished by an aroused and vengeful nature.

There is a lesson for us in this national and moral catastrophe, and we can profit enormously from learning it. We have reached the end of the road in quantity food production. It still makes sense for many poor countries, but there is no future in it for an advanced economy. We should switch all our endeavours and resources to quality farming. Of one thing we can be sure in the new millennium: human beings, in ever growing numbers, will demand bet- ter food: food which is pure in quality, which is produced in accordance with natu- ral laws, which is fresh, appetising, healthy and varied. Our present concern for healthy living is a mere foretaste of what we will demand in 100 years' time, and the quality of food will play a central part in this coming revolution of rising expecta- tions. The sensible fads of one generation will become the consumer norm of the next, and so on. Healthy and sophisticated eating, still the concern of a small minority even in advanced countries, will progres- sively spread until it embraces the whole world, as incomes rise and tastes become more fastidious. What will open up in the next century will be the biggest quality mar- ket in daily products in the whole of histo- ry. Britain could take the lead in supplying it, as we once did in making available cot- ton goods — hitherto a luxury, more costly than silk — to the entire world.

I am not talking simply of organic farm- ing. That obviously has a role to play, and the Prince of Wales has done useful work in pioneering and publicising 'safe' agricul- ture, even contriving, I am glad to see, to make it profitable. But farming in the strictly natural way is only one aspect of the coming revolution. The growing demand for quality food coincides with a series of scientific and technical advances in our ability to supply it. Our expanding knowl- edge of genetics enables us to develop new varieties of fruit, vegetables and grains in ways which do not go against nature but, on the contrary, reinforce and accelerate natu- ral processes. Quality farming does not have to be associated with hand-threshing and morns dancing and smocks. It ought, by its very nature, to be pushing forward the frontiers of technology.

There are exciting scientific miracles waiting to be performed. When, for instance, are we going to get the raw materials and the gastronomy to enable haute cuisine to dispense with meat — or even fish? Who will be the first to pro- duce a drink which has all the stimulative powers of alcohol without actually con- taining it? As the speed of change accel- erates, it is clear that at the end of the 21st century we are going to be eating and drinking quite different products than at its beginning. An economic empire is to be won by the country which anticipates these changes and caters for them. Why should that not be Britain?

There is a lot to be said for using quality farming to escape from the semi-durable consumer goods rat race — or any other rat race. Chile, for instance, which 30 years ago still got over 60 per cent of its national income from copper, with its doom-laden price fluctuations, has successfully rebased its economy on production of high-quality fruit and vegetables, which it exports to all the world. There is endless economic mileage in working with nature, studying it, imitating it. The nicest present I have been given in years is a 'bearskin' rug, made of vegetable fibres. It is so beautiful it makes me weep to look at it, soft as down, warmer than lamb's-wool — I have it on my bed in winter, and in summer, its silky depths by my bedside are the first thing I feel when I get up. Producing such marvellous fabrics, outdoing nature, is what modern science and industry ought to be about.

Moreover, if we take nature as our men- tor, we will simultaneously be doing justice to our surroundings as well as our fellow- creatures. By embracing quality food pro- duction, the Chileans have halted the destruction of their environment by mining. Here, by the economic pursuit of the quan- titative in industry and agriculture, we have destroyed a huge percentage of our coun- tryside, and the process still continues. But in the decades to come it will be technical- ly, financially and commercially possible to reverse the process and restore England's green and pleasant land. How to get the process started ought to be the central theme of our millennium celebrations and expenditure. A Britain where quality always takes precedence over quantity would be a country with a role at last, a place where young people would feel there was some point to life and where the old could see that the tide of decline in our beliefs and standards had finally been turned. The British people are quite capable of effecting such a transformation. To cynics of politics and the media, to the defeatists of the chattering classes, I address the same words John Milton used to the parliament: `Lords and Commons of England — consid- er what nation it is whereof you are and of which you are the governors: a nation not slow or dull but of quick, ingenious and piercing spirit; acute to invent, subtile and sinewy in discourse, not beneath the reach of any point that human capacity can soar to.'