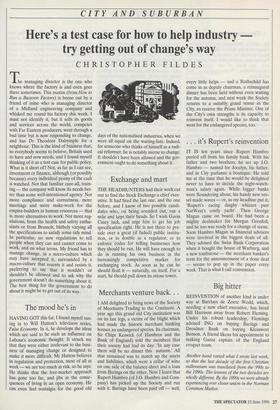 I AM delighted to bring news of the Society of Merchants Trading to the Continent. A year ago this grand old City institution was on its last legs, a victim of the blight which had made the historic merchant banking houses an endangered species. Its chairman, Sir Chips Keswick (of Hambros and the Bank of England) told the members that their society had had its day: In any case there will be no dinner this autumn.' All that remained was to match up the assets and liabilities, which were a cellar of wine on one side of the balance-sheet and a loan from Barings on the other. Now I learn that Rupert Hambro (of J.O. Hambro and Com- pany) has picked up the Society and run with it. Barings have been paid off — well, every little helps — and a Rothschild has come in as deputy chairman, a reinaugural dinner has been held without even waiting for the autumn, and next week the Society returns to a suitably grand venue in the City, to receive the Prime Minister. One of the City's own strengths is its capacity to reinvent itself. I would like to think that went for the endangered species, too.