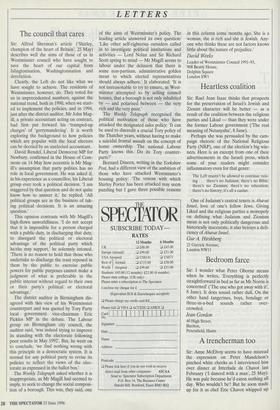 Sir: Rael Jean Isaac thinks that prospects for the preservation of Israel's Jewish and Zionist character will be better — as a result of the coalition between the religious parties and Likud — than they were under the former Labour government (The real meaning of Netanyahu', 8 June).

Perhaps she was persuaded by the cam- paign rhetoric of the National Religious Party (NRP), one of the election's big win- ners. Here is an excerpt from one of their advertisements in the Israeli press, which some of your readers might consider inflammatory even for that genre:

One of Judaism's central tenets is Ahavat Israel, love of one's fellow Jews. Giving Likud and the religious parties a monopoly on defining what Judaism and Zionism mean is not only politically dangerous and historically inaccurate, it also betrays a defi- ciency of Ahavat Israel.