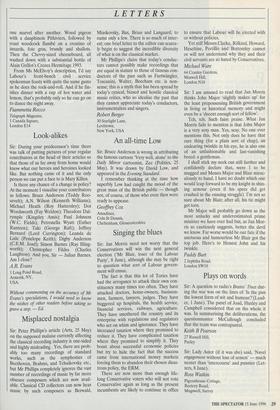 Sir: Peter Phillips's article (Arts, 25 May) on the supposed malaise currently affecting the classical recording industry is one-sided and highly misleading . Yes, there are prob- ably too many recordings of standard works, such as the symphonies of Beethoven, Brahms, and Tchaikovsky etc., but Mr Phillips completely ignores the vast number of recordings of music by far more obscure composers which are now avail- able. Classical CD collectors can now hear music by such composers as Berwald, Miaskovsky, Bax, Brian and Langaard, to name only a few. There is so much of inter- est; one brief letter to the editor can scarce- ly begin to suggest the incredible diversity of what is on the classical market.

Mr Phillips's claim that today's conduc- tors cannot possibly make recordings that are equal in stature to those of famous con- ductors of the past such as Furtwangler, Toscanini, Walter, Beecham etc. is non- sense; this is a myth that has been spread by today's cynical, biased and hostile classical music critics, who so idealise the past that they cannot appreciate today's conductors, instrumentalists and singers.