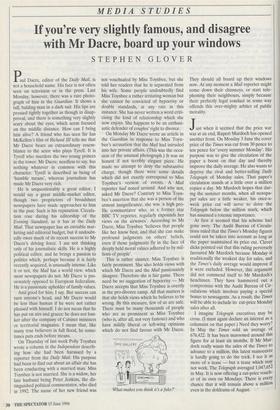 If you're very slightly famous, and disagree with Mr Dacre, board up your windows

Pul Dacre, editor of the Daily Mail, is not a household name. His face is not often seen on television or in the press. Last Monday, however, there was a rare photo- graph of him in the Guardian. It shows a tall, balding man in a dark suit. His lips are pressed tightly together as though in disap- proval, and there is something very slightly scary about the eyes, which seem focused on the middle distance. How can I bring him alive? A friend who has seen Sir Ian McKellen's film of Richard III tells me that Mr Dacre bears an extraordinary resem- blance to the actor who plays Tyrell. It is Tyrell who murders the two young princes in the tower. Mr Dacre, needless to say, has nothing whatever in common with this character. Tyrell is described as being of `humble means', whereas journalism has made Mr Dacre very rich.

He is unquestionably a great editor. I would say a great middle-market editor, though two proprietors of broadsheet newspapers have made approaches to him in the past. Such is his reputation. Circula- tion rose during his editorship of the Evening Standard, as it has at the Daily Mail. That newspaper has an enviable mar- keting and editorial budget, but it undoubt- edly owes much of its recent success to Mr Dacre's driving force. I am not thinking only of his journalistic skills. He is a highly political editor, and he brings a passion to politics which, perhaps because it is fairly recently acquired, is unusually intense. Like it or not, the Mail has a world view, which most newspapers do not. Mr Dacre is pas- sionately opposed to European federalism. He is a passionate upholder of family values.

And good for him, I say. But success can turn anyone's head, and Mr Dacre would be less than human if he were not rather pleased with himself. I do not mean that he has put on airs and graces: he does not han- ker after the company of Cabinet ministers or territorial magnates. I mean that, like many true believers in full flood, he some- times puts ends before means.

On Thursday of last week Polly Toynbee wrote a column in the Independent describ- ing how she had been harassed by a reporter from the Daily Mail. His purpose had been to find out about an affair she has been conducting with a married man. Miss Toynbee is not married. She is a widow, her late husband being Peter Jenkins, the dis- tinguished political commentator, who died in 1992. The name of her new friend was not vouchsafed by Miss Toynbee, but she told her readers that he is separated from his wife. Some people undoubtedly find Miss Toynbee a rather irritating woman but she cannot be convicted of hypocrisy or double standards, at any rate in this instance. She has never written a word criti- cising the kind of relationship which she now enjoys. She happens to be an enthusi- astic defender of couples' right to divorce.

On Monday Mr Dacre wrote an article in the Guardian in response to Miss Toyn- bee's accusation that the Mail had intruded into her private affairs. (This was the occa- sion of the unusual photograph.) It was an honest if not terribly elegant piece. He made no attempt to deny the substantive charge, though there were some details which did not exactly correspond to Miss Toynbee's version of events. A Mail reporter had nosed around. And why not, asked Mr Dacre? Contrary to Miss Toyn- bee's assertion that she was a person of the utmost insignificance, she was 'a high pro- file commentator who, as a former star BBC TV reporter, regularly expounds her views on the airwaves'. According to Mr Dacre, Miss Toynbee 'believes that people like her know best, and that she can make profound judgments on others' beliefs, even if those judgments fly in the face of deeply held moral values adhered to by mil- lions of people'.

This is rather sinister. Miss Toynbee is fairly prominent. She also holds views with which Mr Dacre and the Mail passionately disagree. Therefore she is fair game. There need be no suggestion of hypocrisy — Mr Dacre accepts that Miss Toynbee is overtly in the pro-divorce camp. All that matters is that she holds views which he believes to be wrong. By this measure, few of us are safe. There must be many thousands of people who are as prominent as Miss Toynbee (who is, after all, not very famous) and who have mildly liberal or left-wing opinions which do not find favour with Mr Dacre.

`What makes you think it's a fake?' They should all board up their windows now. At any moment a Mail reporter might come down their chimneys, or start tele- phoning their neighbours, simply because their perfectly legal conduct in some way offends this over-mighty arbiter of public morality.

Just when it seemed that the price war was at an end, Rupert Murdoch has opened another front. On Monday 3 June the cover price of the Times was cut from 30 pence to ten pence for 'every summer Monday'. His purpose was to give the circulation of the paper a boost on that day and thereby improve the daily average. He also wants to deprive the rival and better-selling Daily Telegraph of Monday sales. That paper's circulation stands at a little over a million copies a day. Mr Murdoch hopes that dur- ing the summer months, when all newspa- per sales are a little weaker, his once-a- week price cut will serve to drive the Telegraph below the million mark, which has assumed a totemic importance.

At first it seemed that his scheme had gone awry. The Audit Bureau of Circula- tions ruled that the Times's Monday figures could not be taken into account as long as the paper maintained its price cut. Clever dicks pointed out that this ruling perversely favoured Mr Murdoch because Monday is traditionally the weakest day for sales, and the Times's daily average would improve if it were excluded. However, this argument did not commend itself to Mr Murdoch's henchmen. They have hammered out a compromise with the Audit Bureau of Cir- culations which involves paying a special bonus to newsagents. As a result, the Times will be able to include its cut-price Monday sales after all.

I imagine Telegraph executives may be cross. (I must again declare an interest as a columnist on that paper.) Need they worry? In May the Times sold an average of 676,422. It has been marooned around this figure for at least six months. If Mr Mur- doch really wants the sales of the Times to advance to a million, this latest manoeuvre is hardly going to do the trick. I see it as more of a tease — but a tease which may not work. The Telegraph averaged 1,047,652 in May. It is now offering a cut-price vouch- er of its own on Mondays. There is every chance that it will remain above a million even in the doldrums of August.