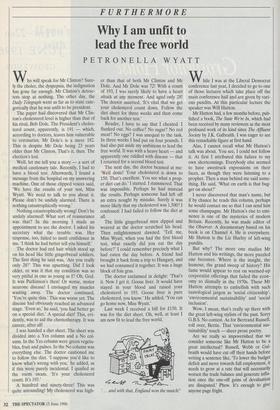 Why I am unfit to lead the free world

Who will speak for Mr Clinton? Sure- ly the choler, the dyspepsia, the indignation has gone far enough. Mr Clinton's detrac- tors stop at nothing. The other day, the Daily Telegraph went as far as to state cate- gorically that he was unfit to be president.

The paper had discovered that Mr Clin- ton's cholesterol level is higher than that of his rival, Bob Dole. The President's choles- terol count, apparently, is 191 — which, according to doctors, leaves him vulnerable to coronaries. Mr Dole's is a mere 182. This is despite Mr Dole being 23 years older than Mr Clinton. That's it, then. The election's lost.

Well, let me tell you a story — a sort of medical cautionary tale. Recently, I had to have a blood test. Afterwards, I found a message from the hospital on my answering machine. One of those clipped voices said, `We have the results of your test, Miss Wyatt. We need to talk to you about it. Please don't be unduly alarmed. There is nothing catastrophically wrong.'

Nothing catastrophically wrong! Don't be unduly alarmed! What sort of reassurance was that? In the morning I made an appointment to see the doctor. I asked his secretary what the trouble was. Her response, too, failed to instil confidence in me. 'I think he had better tell you himself.'

The doctor had red hair which stood up on his head like little gingerbread soldiers. The first thing he said was, 'Are you really only 28?' This was upsetting. Did I look older, or was it that my condition was so very pitiful in one as young as I? Oh, God. It was Parkinson's then! Or worse, motor neurone disease! I envisaged my muscles wasting away. The doctor continued, `You're quite thin.' This was worse yet. The disease had obviously reached an advanced stage. 'Even so,' he said, 'you had better go on a special diet.' A special diet! This, evi- dently, was to aid the chemotherapy. It was cancer, after all!

I was handed a diet sheet. The sheet was divided into a Yes column and a No col- umn. In the Yes column were green vegeta- bles, fruit and pulses. In the No column was everything else. The doctor cautioned me to follow the diet. 'I suppose you'd like to know what's wrong with you,' he added, as if this were purely incidental. I quailed as the room swam. 'It's your cholesterol count. It's 193.'

A hundred and ninety-three! This was quite astounding! My cholesterol was high- er than that of both Mr Clinton and Mr Dole. And Mr Dole was 72! With a count of 193, I was surely likely to have a heart attack at any moment. And aged only 28! The doctor asserted, 'It's vital that we get your cholesterol count down. Follow the diet sheet for three weeks and then come back for another test.'

Reader, I have to say that I cheated. I flunked out. No coffee? No sugar? No red meat? No eggs? I was unequal to the task. In three weeks I had put on four pounds. I had also put aside my ambitions to lead the free world. It was with a heavy heart — and apparently one riddled with disease — that I returned for a second blood test.

The next day, the doctor beamed at me: `Well done! Your cholesterol is down to 150. That's excellent. You see what a prop- er diet can do.' I started. I stammered. That was impossible. Perhaps he had misread the results. Perhaps someone had left off an extra nought by mistake. Surely it was more likely that my cholesterol was 1,500? I confessed: I had failed to follow the diet at all.

The little gingerbread men dipped and weaved as the doctor scratched his head. Then enlightenment dawned. 'Tell me, Miss Wyatt, when you had the first blood test, what exactly did you eat the day before?' I could remember precisely what I had eaten the day before. A friend had brought it back from a trip to Hungary, and we had consumed it together. It was a huge block of foie gras.

The doctor exclaimed in delight: 'That's it. Now I get it. Goose liver. It would have stayed in your blood and raised your cholesterol to 193. Goose liver is pure cholesterol, you know.' He added, 'You can go home now, Miss Wyatt.'

Last week I received a bill for £150. It was for the diet sheet. Oh, well, at least I am now fit to lead the free world.

. . and with that, England won the match!' While I was at the Liberal Democrat conference last year, I decided to go to one of those lectures which take place off the main conference hall and are given by vari- ous pundits. At this particular lecture the speaker was Will Hutton.

Mr Hutton had, a few months before, pub- lished a book, The State We're In, which had been received by many reviewers as the most profound work of its kind since The Affluent Society by J.K Galbraith. I was eager to see this remarkable figure at first hand.

Alas, I cannot recall what Mr Hutton's talk was about. You see, I could not follow it. At first I attributed this failure to my own shortcomings. Everybody else seemed to have awestruck expressions on their faces, as though they were listening to a prophet. Then a man behind me said some- thing. He said, 'What on earth is that bug- ger on about?'

I never discovered that man's name, but if by chance he reads this column, perhaps he would contact me so that I can send him some champagne. Mr Hutton's rise to emi- nence is one of the mysteries of modern Britain. Recently, he was made editor of the Observer. A documentary based on his book is on Channel 4. He is everywhere. Mr Hutton is the Liz Hurley of left-wing pundits.

But why? The more one studies Mr Hutton and his writings, the more puzzled one becomes. Where is the insight, the humour, the grand sweep of history? His fame would appear to rest on warmed-up corporatist offerings that failed the econ- omy so dismally in the 1970s. These Mr Hutton attempts to embellish with such tautological jargon as 'social citizenship', `environmental sustainability' and 'social inclusion'.

Wow, I mean, that's really up there with the great left-wing stylists of the past. Sorry G.B.S. No contest. As for Bertrand Russell, roll over, Bertie. That 'environmental sus- tainability' touch — sheer prose poetry.

Are we really so impoverished that we consider someone like Mr Hutton to be a great intellectual? Russell, Webb or Gal- braith would have cut off their hands before writing a sentence like, `To lower the budget deficit and move towards full employment,. it needs to grow at a rate that will necessarily worsen the trade balance and generate infla- tion once the one-off gains of devaluation are dissipated.' Phew. It's enough to give anyone page fright.