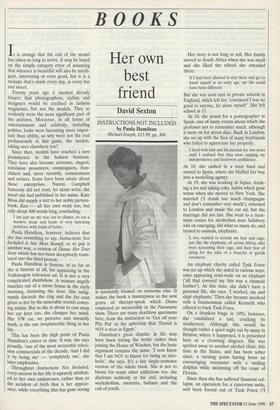 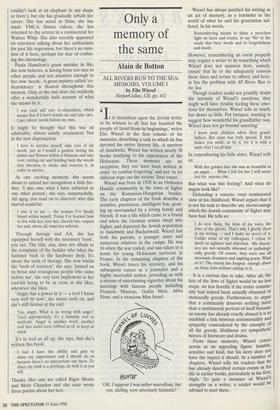 Her own best friend

INSTRUCTIONS NOT INCLUDED by Paula Hamilton

Michael Joseph, £15.99, pp. 304 t is strange that the cult of the model has taken so long to arrive. It may be based on the simple category error of assuming that whoever is beautiful will also be intelli- gent, interesting or even good, but it is a mistake that's made every day, in every bar and street.

Twenty years ago it seemed already bizarre that photographers, stylists and designers would be credited in fashion magazines, but not the models. They so evidently were the most significant part of the pictures. Moreover, in all forms of entertainment and celebrity, including politics, looks were becoming more impor- tant than ability, so why were not the real professionals in this game, the models, taking over elsewhere too?

Since then, models have reached a new prominence in the fashion business. They have also become actresses, singers, television presenters, campaigners, fran- chisers and, more recently, restaurateurs and writers. Some have been astute about these enterprises. Naomi Campbell famously did not read, let alone write, the novel she had published in her name. Kate Moss did supply a text to her noble picture- book, Kate — all her own work too, but only about 400 words long, concluding:

I am just on my way out to dinner, to eat a massive steak and loads of very fattening potatoes, with loads of butter.

Paula Hamilton, however, believes that she has something to say. Instructions Not Included is her Mein Kampf, or to put it another way, a version of Diana: Her True Story which has not been deceptively trans- lated into the third person.

Paula Hamilton is famous, in so far as she is famous at all, for appearing in the Volkswagon television ad. It is not a very complicated dumbshow. A woman angrily marches out of a mews house in the early morning, slamming the door. She indig- nantly discards the ring and the fur coat given to her by the miserable wretch cower- ing within. But as she is about to cast away her car keys too, she changes her mind. Her VW car, we perceive and inwardly mark, is the one irreplaceable thing in her life.

This has been the high point of Paula Hamilton's career to date. It was, she says proudly, 'one of the most successful televi- sion commercials of the decade. And I did it by being me' — 'completely me', she later emphasises. Throughout Instructions Not Included, every success in her life is squarely attribut- ed to her own endeavours, rather than to the accident of birth that is her appear- ance, while everything that has gone wrong is resolutely blamed on someone else. It makes the book a masterpiece in the new genre of therapy-speak which Diana employed so memorably in the Panorama show. There are many deathless specimens here, from the instruction to 'Get off your Pity Pot' to the aphorism that 'Denial is NOT a river in Egypt.'

Hamilton's great disaster in life may have been hitting the bottle rather than joining the House of Windsor, but the basic argument remains the same. 'I now know that I am NOT to blame for being an alco- holic', she says. It's a fair single-sentence version of the whole book. She is not to blame for many other addictions too, she discloses suddenly at the end, including workaholism, anorexia, bulimia and the cult of youth. Her story is not long to tell. Her family moved to South Africa when she was small and she liked the school she attended there:

If I had been allowed to stay there and get to know myself at an early age, my life could have been different.

But she was soon sent to private schools in England, which left her 'convinced I was no good to anyone, let alone myself'. She left school at 15.

At 16, she posed for a pornographer in Spain, one of many events about which she professes not to remember much, although it went on for seven days. Back in London, she set up with the first of many boyfriends who failed to appreciate her properly:

I lived with him and his parents for two years until I realised that they were sapping my independence and hard-won confidence.

At 18, she cashed in a trust fund and moved to Spain, where she bluffed her way into a modelling agency.

At 19, she was working in Japan, drink- ing a lot and taking coke, habits which grew worse when she moved to New York. She married CI drank too much champagne and don't remember very much'), returned to London and made the car ad, but the marriage did not last. She went to a treat- ment centre for alcoholism near Salisbury and on emerging, did what so many do, and turned to animals, elephants: I, too, wanted to scream my fear and rage, just like the elephants, all across Africa, who were screaming their rage, and their fear of dying for the sake of a bracelet or garish ornament.

An elephant charity called Tusk Force was set up which she aided in various ways, once appearing semi-nude on an elephant Call that covered my bits was a chamois leather'). At this time, she didn't have a personal life, she says. 'I worked, ate and slept elephants.' Then she became involved with a businessman called Kenneth who offered to back Tusk Force.

On a drunken binge in 1991, however, she vandalised a taxi, cracking its windscreen. Although this would be thought rather a quiet night out by many in Brixton, where it happened, it is presented here as a crowning disgrace. She was spirited away to another alcohol clinic, this time in the States, and has been sober since, a turning point having been an encouraging encounter with a smiling dolphin while swimming off the coast of Florida.

Since then she has suffered financial col- lapse, an operation for a cancerous mole, and been forced out of Tusk Force CI couldn't look at an elephant in any shape or form'), but she has gradually rebuilt her career. She has acted in films; she has made YMCA fitness videos; she has returned to the screen in a commercial for Walnut Whip. She also recently appeared on television talking about her enthusiasm for past life regression, but there's no men- tion of it here, perhaps for fear of confus- ing the chronology.

Paula Hamilton's great mistake in life, she now believes, is having been too nice to other people and not attentive enough to her own 'needs'. A great mystery called 'co- dependency' is floated throughout this memoir. Only at the end does she suddenly offer a wonderfully bald account of what she means by it:

I was (and still am) co-dependent, which means that if I don't watch out and take care, I put others' needs before my own.

It might be thought that this was an admirable, almost saintly, attainment. Not in the new dispensation:

I have to nurture myself, take care of my needs, just as I would a garden: letting the plants and flowers within it blossom and take root, cutting out and holding back the weeds that threaten to choke and overrun it, in order to survive.

At one exciting moment, she seems about to extend her recognition a little fur- ther. also owe what I have achieved to one other person', she says, suspensefully. All agog, you read on to discover who this marvel could be:

I owe it to me — the woman I've finally found within myself. Today I've learned how to live with her, love her, cherish her, respect her and, above all, want her sobriety.

Through therapy and AA, she has equipped herself with the necessary 'tools', you see. The title, alas, does not allude to the complaint of the builder who takes the hammer back to the hardware shop. It's about the tools of therapy. She now wields the 'tools of recovery', she says, 'passed on by brave and courageous people who came before me', the very best implement in her tool-kit being to be as cross as she likes, whenever she likes.

`Anger has a power in it — a tool I know very well by now', she warns early on, and she's still furious at the end.

Yes, angry. What is so wrong with anger? Used appropriately, it's a fantastic tool to motivate. Anger is another word, another tool that males have robbed us of, to keep us stuck.

It's to tool us all up, she says, that she's written this book:

I feel I have the ability and guts to share my experiences and I should do so because there's no instructions out there. To share my truth is a privilege; do with it as you will.

Thanks. Her cats are called Rigor Mortis and Moet Chandon and she once wrote three poems about her feet.