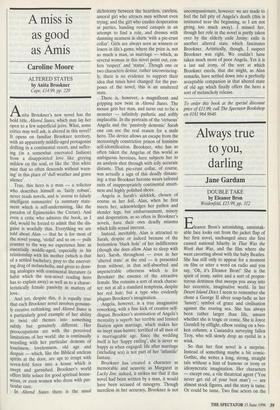 A miss is as good as Amis

ALTERED STATES by Anita Brookner Cape, £14.99, pp. 220 Anita Brookner's new novel has the bold title, Altered States, which may lay her open to a few superficial jeers. What, some critics may well ask, is altered in this novel? It opens on familiar Brookner territory, with an apparently middle-aged protagonist drifting in a continental resort, and suffer- ing (in a somewhat enervated fashion) from a disappointed love like greying mildew on the soul, or like the 'thin white mist that so often descends without warn- ing' in this place of 'dull weather and grave silence'.

True, this hero is a man — a solicitor who describes himself as 'fairly robust', never reads novels, and is 'averse to falsely intelligent summaries' (a summary state- ment which is self-undermining, like the paradox of Epimenides the Cretan). And even a critic who admires the book, as I did, would be forced to admit that the dis- guise is woefully thin. Everything we are told about Alan — that he is for most of the novel young, 'stolid' and so on — pulls counter to the way we experience him: as essentially middle-aged, especially in his relationship with his mother (which is that of a settled bachelor), prey to the enervat- ing drag of melancholia, and given to draw- ing analogies with continental literature (a habit which the non-novel reading hero has to explain away) as well as to a charac- teristically female passivity in matters of love.

And yet, despite this, it is equally true that each Brookner novel involves genuine- ly creative rethinking; and Altered States is a particularly good example of her ability to twist old themes into something subtly but genuinely different. Her preoccupations are with the perceived limitations of her world: she is continually wrestling with her particular demons of loneliness, lovelessness, old age and despair — which, like the Biblical unclean spirits at the door, are apt to irrupt with seven-fold force into a house which is swept and garnished. Brookner's world offers little solace for good spiritual house- wives, or even women who dress with par- ticular care.

In Altered States there is the usual dichotomy between the heartless, careless, amoral girl who attracts men without even trying; and the girl who exudes desperation at parties, handing round canapes in an attempt to find a role, and dresses with damning neatness in shirts 'with a pie-crust collar'. Girls are always seen as winners or losers in life's game, where the prize is, not so much a man, as marriage — which, as several woman in this novel point out, con- fers 'respect' and 'status'. Though one or two characters demur, rather unconvincing- ly, there is no evidence to support their idea that times have changed: for the pur- poses of the novel, this is an unaltered state.

There is, however, a magnificent and gripping new twist in Altered States. The mouse gets her man, and turns out to be a monster — infinitely pathetic and softly implacable. In the portraits of the 'virtuous' Angela and the 'passively demonic' Sarah one can see the real reason for a male hero. The device allows an escape from the increasingly constrictive prison of feminine self-identification. Brookner, who has so often taken the Angelas of this world as ambiguous heroines, here subjects her to an analysis shot through with icily accurate distaste. That pie-crust collar, of course, was actually a sign of this deadly distanc- ing: a true Brookner heroine wears tailored suits of inappropriately continental smart- ness and highly polished shoes. Angela is Sarah's sidekick, chosen of course as her foil. Alan, when he first meets her, acknowledges her pathos and slender legs; but embarrassment, misery and desperation, as so often in Brookner's novels, have their own deadly miasma which kills sexual interest.

Instead, inevitably, Alan is attracted to Sarah, despite or indeed because of the bottomless 'black hole' of her indifference (though she does allow Alan to sleep with her). Sarah, throughout — even in her `altered state' at the end — is presented from without, in that self-absorbed and impenetrable otherness which is for Brookner the essence of the attractive female. She remains a sort of stock charac- ter: not at all a standard temptress, despite her red hair; but a type who evidently plagues Brookner's imagination. Angela, however, is a true imaginative reworking, with a fine kick of creative self- disgust. Brookner's atomisation of Angela's mentality is superb: her terrible and limited fixation upon marriage, which makes her an inept man-hunter, terrified of all men of a marriageable age. Since the wedding itself is her 'happy ending', she is never so happy as when engaged: life after marriage (including sex) is not part of her 'infantile' fantasy.

Brookner has created a character as memorable and neurotic as Margaret in Lucky Jim: indeed, it strikes me that if this novel had been written by a man, it would have been accused of misogyny. Though merciless in her accuracy, Brookner is not uncompassionate, however: we are made to feel the full pity of Angela's death (this is intimated near the beginning, so I am not giving too much away). I missed her, though her role in the novel is partly taken over by the elderly exile Jenny: exile is another altered state which fascinates Brookner. Artistically, though, I suspect Brookner was right. We couldn't have taken much more of poor Angela. Yet it is a last sad irony, of the sort at which Brookner excels, that she might, as Alan remarks, have settled down into a perfectly acceptable companion in that altered state of old age which finally offers the hero a sort of melancholy release.