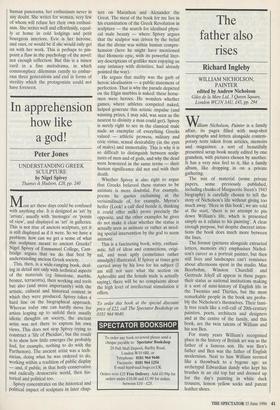 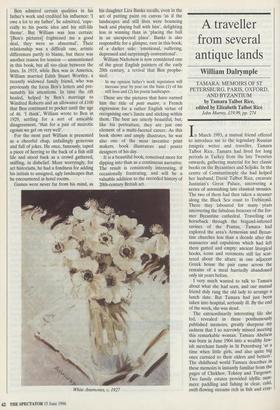 WILLIAM NICHOLSON, PAINTER edited by Andrew Nicholson Giles de la Mere Ltd, 3 Queen Square, London WC1N 3AU, £45, pp. 294 Wililliam Nicholson, Painter is a family affair, its pages filled with snap-shot photographs and letters alongside contem- porary texts taken from articles, memoirs and magazines: a sort of beautifully presented scrap book neatly edited by one grandson, with pictures chosen by another. It has a very nice feel to it, like a family album, like dropping in on a private gathering.

The mix of material (some private papers, some previously published, including chunks of Marguerite Steen's 1943 biography) is carefully chosen to tell the story of Nicholson's life without giving too much away. 'Here in this book', we are told at the start, 'there is no attempt to pin down William's life, which is presented simply as it relates to his painting'. A clear enough purpose, but despite discreet inten- tions the book does much more between the lines.

The format (pictures alongside extracted letters, memoirs etc) emphasises Nichol- son's career as a portrait painter, but then still lives and landscapes can't reminisce about afternoons spent in the studio. Max Beerbohm, Winston Churchill and Gertrude Jekyll all appear in these pages: their status as national institutions making it a sort of mini-history of English life in the Twenties and Thirties, but the most remarkable people in the book are proba- bly the Nicholson's themselves. Their fami- ly tree reads like a roll-call of 20th-century painters, poets, architects and designers and at the centre of the family, and this book, are the twin talents of William and his son Ben.

For many years William's recognised place in the history of British art was as the father of a famous son. He was Ben's father and Ben was the father of English modernism. Next to him William seemed like a throwback to a bygone age: an archetypal Edwardian dandy who kept his brushes in an old top hat and dressed up for the day's painting in white duck trousers, lemon yellow socks and patent leather shoes. Ben admired certain qualities in his father's work and credited his influence: 'I owe a lot to my father', he admitted, 'espe- cially to his poetic idea and his still-life theme'. But William was less certain: pen's pictures] frightened me a good deal, they were so abnormal'. Their relationship was a difficult one, artistic differences partly to blame, but there was another reason for tension — unmentioned in this book, but all too clear between the lines. In 1919, while Ben was in America, William married Edith Stuart Wortley, a recently widowed family friend, who was previously the focus Ben's letters and pre- sumably his attentions. In time the rift healed, helped by Ben's marriage to Winifred Roberts and an allowance of £100 that Ben continued to pocket until the age of 4.6. 'I think', William wrote to Ben in 1929, settling for a sort of amicable disagreement, 'that for a pair of neurotic egoists we get on very well'.

For the most part William is presented as a cheerful chap, unfailingly generous and full of jokes. He once, famously, taped a piece of herring to the back of a fish still life and stood back as a crowd gathered, sniffing, in disbelief. More worryingly, for art historians, he had a fondness for adding his initials to unsigned, ugly landscapes that he encountered in hotel rooms.

Games were never far from his mind, as his daughter Liza Banks recalls, even in the act of putting paint on canvas 'as if the landscapes and still lives were bouncing back and playing ball with him', delighting less in winning than in 'placing the ball in an unexpected place'. Banks is also responsible for a glimpse, rare in this book, of a darker side: 'emotional, suffering, depressed and surprisingly conventional'.

William Nicholson is now considered one of the great English painters of the early 20th century, a revival that Ben prophe- sied:

In my opinion father's work reputation will increase year by year on the basis (1) of his still lives and (2) his poetic landscapes.

These are the pictures that have earned him the title of petit maitre, a French expression for a rather English virtue of recognising one's limits and sticking within them. The best are utterly beautiful, but, like his portraiture, they are just one element of a multi-faceted career. As this book shows and amply illustrates, he was also one of the most inventive print makers, book illustrators and poster designers of his day.

It is a beautiful book, conceived more for dipping into than as a continuous narrative. The result is consistently interesting, if occasionally frustrating, and will be a valuable addition to the recorded history of 20th-century British art.