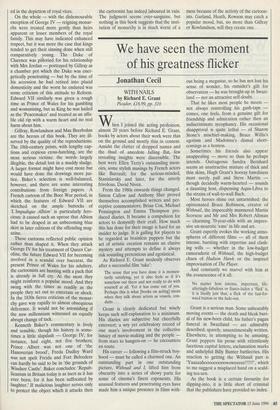 We have seen the moment of his greatness flicker

WITH NAILS by Richard E. Grant Picador, £16.99, pp. 310 Wen I joined the acting profession, almost 20 years before Richard E. Grant, books by actors about their work were thin on the ground and mostly thin in content. Amidst the clutter of dropped names and the thud of anecdote falling flat, few revealing insights were discernible. The best were Ellen Terry's outstanding mem- oirs, some stylish musings by French actors like Barrault; for the serious-minded, Stanislaysky and later, for the utterly frivolous, David Niven.

From the 1980s onwards things changed. Simon Callow and Anthony Sher proved themselves accomplished writers and per- ceptive commentators; Brian Cox, Michael Pennington and Emma Thompson pro- duced diaries. It became a compulsion for actors to demystify their craft. How much this has done for their image is hard for an insider to judge. It is galling for players to be regarded as brainless puppets but the act of artistic creation remains an elusive mystery and attempts to define it always risk sounding pretentious and egotistical.

The sense that you have done it is momen- tarily satisfying, yet it also feels as if it's somehow out there and not really to do with yourself at all. Yet it has come out of you. Perhaps this is what [books on acting] mean when they talk about actors as vessels, con- duits .. .

Grant is clearly dedicated but wisely keeps such self-explanation to a minimum. His diaries are subjective but cheerfully extrovert; a wry yet celebratory record of one man's involvement in the collective lunacy of movie-making and the people from stars to hangers-on — he encounters en route.

His career — following a film-struck boy- hood — must be called a charmed one. An outstanding part in one outstanding picture, Withnail and I, lifted him from obscurity into a series of showy parts for some of cinema's finest exponents. His unusual features and penetrating eyes have made him a unique presence in films with- out being a megastar, so he has not lost his sense of wonder, his outsider's gift for observation — he was brought-up in Swazi- land — nor an attractive self-doubt.

That he likes most people he meets not always controlling his gush-taps comes, one feels, from a genuine gift for friendship and admiration rather then an indiscriminate sycophancy. His occasional disapproval is quite lethal — of Sharon Stone's mischief-making, Bruce Willis's egotism and Madonna's dismal short- comings as a hostess.

Most heroes shine out untarnished: the opinionated Bruce Robinson, creator of Withnail, the impeccably mannered Martin Scorsese and Mr and Mrs Robert Altman — charming 70-year-olds with an impres- sive un-neurotic 'ease' in life and art.

Grant expertly evokes the working atmo- spheres of different films — all of them intense, bursting with expertise and clash- ing wills — whether in the low-budget camaraderie of Withnail, the high-budget chaos of Hudson Hawk or the inspired improvisation of The Player.

And constantly we marvel with him at the evanescence of it all:

No matter how intense, important, life- alteringly-fabulous or fiasco-laden a 'flick' is, it is finally just that, a flick of the fast-for- ward button or the fade-out.

Grant is a serious man. Some unbearably moving events — the death and bleak buri- al of his new-born child, his father's pagan funeral in Swaziland — are admirably described; sparely, unsentimentally written. Elsewhere, in attempting to be amusing, Grant peppers his prose with relentlessly facetious capital letters, exclamation marks and unhelpful Billy Bunter battlecries. His reaction to getting the Withnail part is `Yaaaaah000000000woweeeeell III', which to me suggest a misplaced hand on a scald- ing tea-urn.

As the book is a certain favourite for dipping-into, it is little short of criminal that the publishers have provided no index.