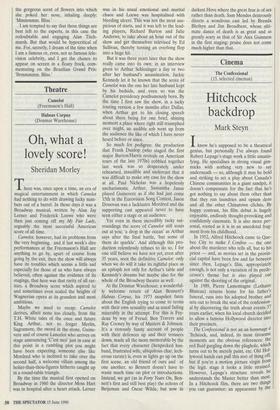 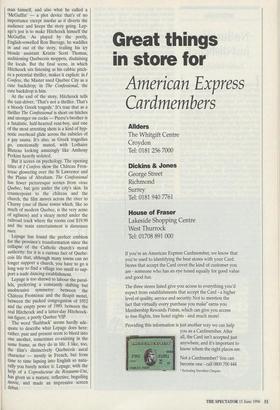 Iknow he's supposed to be a theatrical genius, but personally I've always found Robert Lepage's stage work a little unsatis- fying. He specialises in strong visual gim- micks with nothing very new to say underneath — so, although it may be bold and striking to set a play about Canada's Chinese communities in a giant sandpit, it doesn't compensate for the fact that he's got nothing to say about them other than that they run laundries and opium dens and all the other Chinatown clichés. By happy contrast, his film debut is hugely enjoyable, endlessly thought-provoking and confidently cinematic. It is also more per- sonal, rooted as it is in an anecdotal frag- ment from his childhood.

In 1952, Alfred Hitchcock came to Que- bec City to make I Confess — the one about the murderer who tells all, but to his priest — and, as movies set in the provin- cial capital have been few and far between since then, Lepage's film, appropriately enough, is not only a variation of its prede- cessor's theme but is also played out against the shooting of the original.

In 1989, Pierre Lamontagne (Lothaire Bluteau) returns home for his father's funeral, runs into his adopted brother and sets out to break the seal of the confession- al by discovering the truth about events 37 years earlier, when his local church decided to allow a famous Hollywood director into their precincts. The Confessional is not an an hommage a 'Itchcock, and, indeed, its most tiresome moments are the obvious references: the red fluid gurgling down the plughole, which turns out to be merely paint, etc. Old Hol- lywood hands can pull this sort of thing off, but if you're a motion picture virgin from the legit. stage it looks a little strained. However, Lepage's structure reveals he understands the Master better than most. In a Hitchcock film, there are two things you can guarantee: an appearance by the man himself, and also what he called a `McGuffin' — a plot device that's of no importance except insofar as it diverts the audience and keeps the story going. Lep- age's jest is to make Hitchcock himself the McGuffin. As played by the portly, English-vowelled Ron Burrage, he waddles in and out of the story, trailing his icy blonde assistant Kristin Scott Thomas, auditioning Quebecois moppets, disdaining the locals. But the final scene, in which Hitchcock sits listening as his cabbie pitch- es a potential thriller, makes it explicit: in I Confess, the Master used Quebec City as a cute backdrop; in The Confessional, the cute backdrop is him.

At the end of the story, Hitchcock tells the taxi-driver, 'That's not a thriller. That's a bloody Greek tragedy.' It's true that as a thriller The Confessional is short on hitches and stronger on cocks — Pierre's brother is a fatalistic, half-hearted rent-boy, and one of the most arresting shots is a kind of hyp- notic overhead glide across the cubicles of a gay sauna. It's also, as Greek tragedies go, emotionally muted, with Lothaire Bluteau looking amazingly like Anthony Perkins heavily sedated.

But it scores on psychology. The opening titles of I Confess show the Château Fron- tenac glowering over the St Lawrence and the Plains of Abraham. The Confessional has fewer picturesque scenes from vieux Quebec, but gets under the city's skin. In counterpoint to the château and the church, the film move's across the river to Charny (one of those towns which, like so much of modem Quebec, is the very acme of ugliness) and a sleazy motel under the railroad track where the rooms cost $19.99 and the main entertainment is danseuses nues.

Lepage has found the perfect emblem for the province's transformation since the collapse of the Catholic church's moral authority: for it is a curious fact of Quebe- cois life that, although many towns can no longer support a church, you have to go a long way to find a village too small to sup- port a nude dancing establishment.

Lepage is too shrewd to labour the paral- lels, preferring a constantly shifting but unobtrusive symmetry: between the Château Frontenac and the fleapit motel, between the packed congregation of 1952 and the empty pews of 1989, between the real Hitchcock and a latter-day Hitchcock- ian figure, a portly Quebec VIP. The word 'flashback' seems hardly ade- quate to describe what Lepage does here: rather, past and present seem to bleed into one another, sometimes co-existing in the same frame, as they do in life. I like, too, the film's distinctively Quebecois aural character — mostly in French, but from time to time lapsing into English so natu- rally you barely notice it. Lepage, with the help of a Coproducteur du Royaume-Uni, has given us a mature, reflective, beguiling movie, and made an impressive screen debut.