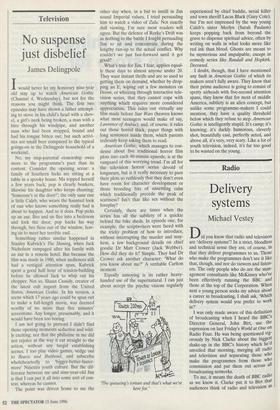 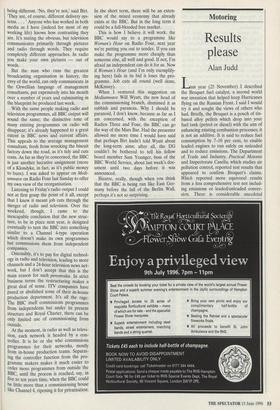 Did you know that radio and television are 'delivery systems'? In a strict, bloodless and technical sense they are, of course, in that they deliver programmes to us. Those who make the programmes don't see it like that, though, and nor do viewers and listen- ers. The only people who do are the man- agement consultants like McKinsey who've been effectively running the BBC and those at the top of the Corporation. When next a young person seeks my advice about a career in broadcasting, I shall ask, 'Which delivery system would you prefer to work in?'

I was only made aware of this definition of broadcasting when I heard the BBC's Director General, John Birt, use the expression on last Friday's World at One on Radio Four. He was being questioned vig- orously by Nick Clarke about the biggest shake-up in the BBC's history which he'd unveiled that morning, merging all radio and television and separating those who make the programmes from those who commission and put them out across all broadcasting networks. To me, it means the death of BBC radio as we know it. Clarke put it to Birt that audiences think of radio and television as being different. 'No, they're not,' said Birt. `They are, of course, different delivery sys- tems. . . . ' Anyone who has worked in both media as I have (indeed for most of my working life) knows how contrasting they are. It's stating the obvious, but television communicates primarily through pictures and radio through words. They require completely different approaches. In radio you make your own pictures — out of words.

But the man who runs the greatest broadcasting organisation in history, the envy of the world, can only communicate in the Orwellian language of management consultants, put expensively into his mouth over a number of years and culminating in the blueprint he produced last week.

With the same people making radio and television programmes, all BBC output will sound the same; the distinctive tone of many existing programmes on radio will disappear; it's already happened to a great extent in BBC news and current affairs. This appeals to the average management consultant, fresh from wrecking the biscuit factory down the road, as it's tidy and cuts costs. As far as they're concerned, the BBC is just another lucrative assignment (more of a Klondyke, in fact, as it's public money to burn). I was asked to appear on Medi- umwave on Radio Four last Sunday to offer my own view of the reorganisation.

Listening to Friday's radio output I could not at first grasp the point of it all, except that I knew it meant job cuts through the merger of radio and television. Over the weekend, though, I came to the inescapable conclusion that the new struc- ture, to be in place next year, is designed eventually to turn the BBC into something similar to a Channel 4-type operation which doesn't make its own programmes but commissions them from independent companies.

Ostensibly, it's to pay for digital technol- ogy in radio and television, leading to more channels and a 24-hour television news net- work, but I don't accept that this is the main reason for such perestroika. In strict business terms the restructuring makes a great deal of sense. ITV companies have pared or abolished some of their in-house production department. It's all the rage. The BBC itself commissions programmes from independents but under its present structure and Royal Charter, there can be only limited use of commissioning from outside.

At the moment, in radio as well as televi- sion, each network is headed by a con- troller. It is he or she who commissions programmes for their networks, mostly from in-house production teams. Separat- ing the controller function from the pro- gramme makers makes it much easier to order more programmes from outside the BBC, until the process is reached, say, in five to ten years time, when the BBC could be little more than a commissioning house like Channel 4, ripening it for privatisation. In the short term, there will be an exten- sion of the mixed economy that already exists at the BBC. But in the long term it could be a full-blooded free market.

This is how I believe it will work: the BBC would say to a programme like Woman's Hour on Radio Four, next year we're putting you out to tender. If you can make the programme more cheaply than someone else, all well and good. If not, I'm afraid an independent can do it for us. Now if Woman's Hour (and I'm only exemplify- ing here) fails in its bid it loses the pro- gramme. Job cuts all round (well done, McKinsey).

When I ventured this suggestion on Mediumwave Will Wyatt, the new head of the commissioning branch, dismissed it as rubbish and paranoia. Why I should be paranoid, I don't know, because as far as I am concerned, with the exception of Radios Three and Four, the BBC can go the way of the Mars Bar. Had the presenter allowed me more time I would have said that perhaps Birt hadn't told Wyatt about the long-term aims; after all, the DG couldn't be bothered to tell his fellow board member Sam Younger, boss of the BBC World Service, about last week's doc- ument until two days before it was announced.

Bizarre, really, though when you think that the BBC is being run like East Ger- many before the fall of the Berlin Wall, perhaps it's not so surprising.